Share All sharing options for: The Bag Revolt: Reconciliation

Nine months ago, things were bad.  Upon reflection, it's almost hard to believe that it's been less than a year since John Hammond and Scott Skiles signed on and started to remake the Bucks' organization from the ground up.  Remember March?  The Bucks were stumbling to a 56-loss season, Larry Harris had departed without a full-time replacement, Larry Krystkowiak was coaching on borrowed time, and the epicenter of blame seemed to be owner Herb Kohl.  Bill Simmons was in the middle of an almost-serious campaign to be GM.  Needless to say it was a difficult time for the man who had more or less single-handedly kept the Bucks in Milwaukee.  The team hadn't been this rudderless since the early '90s, when fans were still new enough to the idea of "rebuilding" to think that it might work within a reasonable amount of time (how about 10 years?).  Fast forward to 2008, and there was no longer any such delusion. 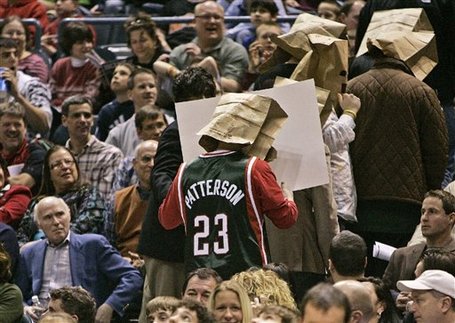 It wasn't a very fun time to be a Bucks fan, a sentiment reflected most notably on March 16, the night of the Bag Revolt.  The enduring picture of the night was that of an annoyed Sen. Kohl reacting to a handful of bag-wearing fans being led away by security in the late stages of the Bucks' 99-77 loss to the Celtics.  Adding an extra dose of irony (and memorability) was the Ruben Patterson jersey donned by Bucks superfan Nowak.  (Patterson of course was the registered sex offender whom the Bucks had opted not to re-sign the previous summer despite a career year in 06/07.  By the way, Nowak's also a fan of Mo Williams and Terry Stotts--he just loves the black sheep).

Well, all is now forgiven.  The Bucks are a long way from contention, but the team finally has some semblance of direction and remains in the playoff hunt despite a rough early schedule. And so Sen. Kohl was understandably in a good mood last night at the Bucks' "Holiday Hoopla" dinner, making his rounds, chatting with fans and posing for pictures.  Kudos to him for that.  Among those requesting a picture?  Nowak, Keith, and Dan of bag revolt fame. Yep, those are the same Ruben Patterson jerseys. 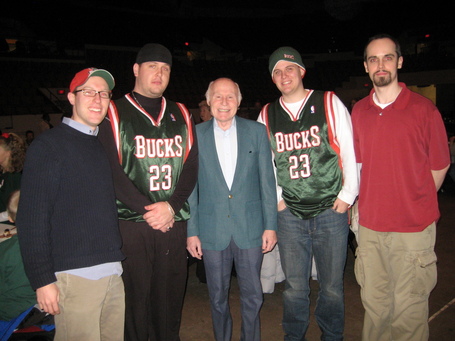 I had the chance to hang out with them and a couple other longtime RealGMers before the game, which is always a good time.  But no one enjoyed it more than Adam, a Madison native, trumpet extraordinaire, and the Bucks' biggest fan in New Jersey.  During the raffle he won a courtside ticket upgrade so he and his wife watched the Bucks from the best seats in the house.  Check out his account here.