Sessions: Not starting, but leading

Share All sharing options for: Sessions: Not starting, but leading 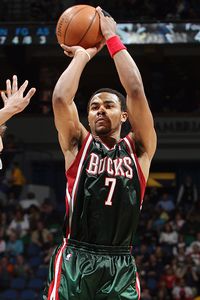 According to a pair of BrewHoop-supported statistical measures, Ramon Sessions is the most productive player on the Bucks this season. That's different than saying BrewHoop thinks Sessions is the team's best player, but read on.

Sessions has a 17.12 PER, good enough for 70th in the NBA. The fact that the top-rated Buck is 70th in the NBA is troubling; more context on that point is forthcoming. Perhaps worse is that the team's top-rated player is coming off the bench. He's averaging a very respectable 31.6 minutes per game, but keep in mind that total doesn't include the first two games of the year when he didn't even suit up.

Last night's loss featured a rather useless performances by the Bucks' starting unit, so maybe it shouldn't surprise you that the next highest rated Buck in terms of PER is Sessions' backup-friend Charlie Villanueva, whose 16.06 places him 102nd.

PER is limited, and far, far from perfect, like all stats, including the Roland Rating. At the same time, John Hollinger and the guys at 82games are two of the finest in the NBA-stat biz.

And the Roland Rating ranks Ramon Sessions as the best Buck this year as well. His +8.4 rating tops second place Richard Jefferson's +4.7 handily.

Sessions' productivity has slowed in the last week, and Andrew Bogut, Richard Jefferson, and Michael Redd can still make strong cases as the team's best player, especially if we consider output previous to this year. But there is little doubt that Sessions is at the very least the team's best point guard.

(As a sidenote, Sessions won our preseason poll asking who should start at point guard... so Skiles stuck him to the bench the first two games of the year. Bravo, BrewHoopians. Recently, davio ran a similar poll in FanPosts.)

The Bucks will struggle as long as Bogut, Jefferson, and Redd don't step up as the team's top players. Ramon Sessions, on the whole, is playing ball. And Luc Mbah a Moute, Charlie Villanueva, Dan Gadzuric, and Joe Alexander are doing about as well as any realistic fan could hope.

Bogut, Jefferson, Redd (and Ridnour) are underachieving. From a year ago, the first three are down in: PPG, APG, FT %, and PER. When 80 % of the starting lineup is underperforming, that's a problem. Said problem is exacerbated exponentially when Malik Allen is the fifth starter.

The big three should be in the prime of their careers, ranging in age from 24-29. As such, we should be optimistic that they are only going to improve as the season progresses. If Bogut, Jefferson, and Redd improve, and Sessions becomes the fourth best player on the team, Milwaukee will be in good shape.

More good news: The Bucks have faced a preposterous early schedule; only Portland has played more road games. And don't look now, but Milwaukee is just one game out of the playoffs.

Back to PER. Twenty-seven teams have a player with a higher PER than Sessions. Continue reading to see each team's current top-rated PER man with overall ranking in parenthesis: