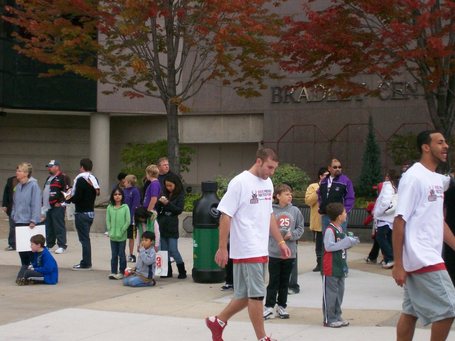 So keep that in mind. Though this time we're talking about a game (or at least a scrimmage) too.

The Bradley Center hosted an open practice to unveil the 2009-10 Milwaukee Bucks this afternoon. A nice public service, because it's nigh time to reacquaint yourself with the team: There's quite a bit of turnover from the last time we saw the them.

Twenty-eight minutes of purely Bucks basketball today. Plenty of time to learn. Though it's also plenty early, and remember that. It's plenty early in two months. We're just dealing with perhapses today: It's only October 3.

But it is October. And today felt like it.

"Our bench is going to be very strong," Scott Skiles told Jim Paschke and the crowd prior to tip-off.

Who, exactly, will comprise the bench (and the starting lineup) is a very worthwhile question then. If the open practice is any indication, we might have an idea. The game pitted White v. Black on the scoreboard, and White looked suspiciously like what Scott Skiles might be considering as his starting five: Luke Ridnour/Michael Redd/Luc Mbah a Moute/Ersan Ilyasova/Andrew Bogut. A lot can and will change during the next three weeks, but that lineup was not put together coincidentally.

To start, they faced Brandon Jennings/Charlie Bell/Carlos Delfino/Kurt Thomas. And if this was a matchup of starters versus bench, then the bench was not exactly "very strong" in the opening period.

White built a 26-9 lead after the first eight-minute quarter thanks to sloppy play by Black, but (and this is the part you're more interested in) also thanks to the sharpness of Michael Redd, Andrew Bogut, and co. Redd played decisively, looked strong, and generally didn't show any lasting signs of injury. He netted a cool 11 points in the first eight minutes, including a swished three to close the period. He also looked good going to the hoop, drew a couple fouls, and led everyone with 18 points overall. The pace of the game (practice, remember) was naturally slower and sloppier than regular season ball, but Redd earned favorable reviews with this performance. Encouraging.

Meanwhile, Bogut remains stiff at the free throw line, but was active on both sides of the ball. He didn't overwhelm, but was solid. He barely played in the second half, and was situated on the baseline sort of Steve Nash-style in the third quarter, but rejoined teammates on the bench shortly after. Nothing to read into there; Bogut appears ready to go.

Charlie Bell, ummm, did his job today like he has all summer. Some players looked a bit weary late in the game, but Bell appeared in good condition throughout. He was energized defensively and gained confidence after hitting a couple jumpers in a row in the second quarter. It should be noted that some players switched teams during the game, including Bell and Brandon Jennings, so the 54-47 final score in favor of White is even more meaningless than you would think. Which is to say, extraordinarily meaningless.

Speaking of Jennings, the rookie played like a... rookie. A gifted rookie, but most certainly a rookie. He opened the game by hitting a three, but then didn't score again until making a few fourth quarter free throws. In between, he committed more than a couple turnovers, including two of the flashy-pass-gone-bad variety. Still, it's plain to see Jennings already offers great quickness and ballhandling skills. Ukic orchestrated the offense under more control and picked off a few passes defensively in a pretty nice showing. Ridnour was Ridnour-like, and whether or not any of the team's point guards can shoot is a legitimate question heading into the season.

Newcomers Hakim Warrick and Carlos Delfino were only noticeable in how quiet they were offensively. Neither had scored a few minutes into the third quarter when Delfino drove and dished to Warrick for a one-handed slam... Unfortunately that came after Delfino was whistled for an offensive foul. Probably just one of those days for these two; this is after all an absurdly small sample size and not a terribly competitive match.

Ilysasova meanwhile seemed to stay close to the action in general. He started better than he finished, but the forward isn't afraid to shoot the ball or try to create things offensively, which is nice to see.

Gadzuric waited 1:37 to commit his first foul, as Black racked up five fouls in the first period, which equaled five more than White. And Gadzuric also tossed an airball in the second half, but one way or another finished with 15 points. Which is more than he scored in all but one game during the last two years.

So I hope you were there today.