Yes, we're talking about Luke Ridnour. Just 24 hours after an ugly fall in Boston that partially dislocated his left elbow--hence the NFL lineman's knee brace on his arm last night--Ridnour was back at it, needing just 15 minutes to score 15 points with six assists and no turnovers in the Bucks' win over the Raptors. What's surprising is that--at least this season--performances like that haven't been a surprise at all. And if you're at all familiar with Ridnour's recent history, that itself is...well, surprising. More after the jump...

Let's start with a crazy-sounding null hypothesis: Ridnour has been the Bucks' most effective player through 21 games. Sure, it seems kind of silly when you say it, and "effective" shouldn't be equated with "valuable" or "important" (I'll go with Bogut followed by Jennings on that one). Nor should that endorsement be confused as a forward-looking projection for the rest of the season (more on that in a moment). Still, Ridnour's strong play has turned into more than just a fleeting hot streak at this point. Truman Reed at Bucks.com was on the story a few weeks ago, and the story hasn't changed much since then.

"He's been, in many ways, one of our most valuable players so far since Labor Day weekend," Skiles said. "He came in early. He was great in September. He was great during the exhibition season. He's come off the bench and made good plays.

"There have been times where we've been teetering a little bit when he's been in the game and he's been able to come up with something -- either making shots, making plays or playing good defense. He's been very valuable so far."

But the efficiency is rather excellent--and completely out of character with what Ridnour has done previously in his career. Ridnour currently leads the team in PER (19.46), true shooting percentage (60%), and assists/40 minutes (7.5) while ranking second in pts/40 minutes (19.2). Ty at Bucks Diary also has Ridnour as the Bucks' biggest win contributor through 21 games. Consider Ridnour's career shooting stats from Basketball Reference and 82games:

Using this data, it would appear very little has changed--with the notable exception that Ridnour is making two-point jump shots at a much higher percentage than ever before. While his three point percentage is up a bit over a year ago (39.2% vs. 35.0%), his percentage on two-pointers is up by a much bigger margin: 55.2% vs. 42.0%.

And despite his recent penchant for making awkward, rec league-style flip shots in the paint, 82games' data suggests Ridnour has continued to struggle in the direct vicinity of the hoop, meaning it's his two-point jump shots which are driving much of his shooting improvement. Per 82games, his efg% inside is a dreadful 39.3%, just above the 38.3% he posted last year. Fortunately, at least 78% of his shots have been jumpers every year of his career, and he's at 84% this season after 86% last year. So he knows his limits. While 82games doesn't have two-point jump-shooting data for 09/10, we can back it out from the inside/jumper data and regular shooting splits. By my quick calcs, Ridnour's currently making a stunning 58% of his two-point jumpers--miles better than the 42.8% he registered last year and well beyond Jason Terry's league-leading 49.2% for 08/09.

However, I'm a little skeptical of the 82games data because the inside numbers don't square at all with the NBA's HotSpot data and the similar numbers available at HoopData. Those sources suggest Ridnour's been better finishing at the rim (48% vs. 40% last year) in addition to shooting much better on long twos (55% vs. 44% a year ago). However, shots from in-close are still a minority of his overall attempts, so it's not him simply being more aggressive and effective around the cup. He's been on fire shooting from most parts of the court, especially the sides: 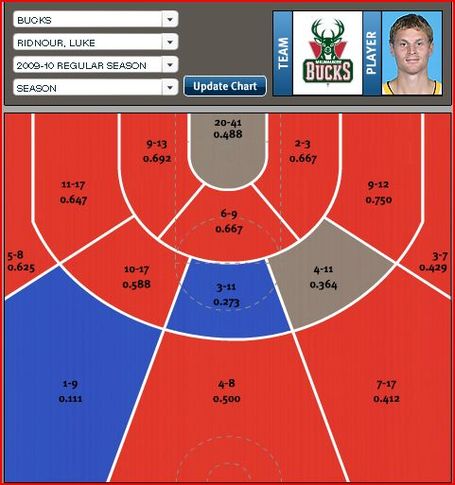 Whichever data is more accurate, the basic conclusions are similar. Along with a decrease in his turnover rate, that sudden jump-shooting improvement has caused all his shooting and efficiency numbers to go well above his career averages. Most of his other numbers--namely assists and rebounds--are fairly close to their historical averages, while his steal and block numbers are down.

As you might guess, the specific source of Ridnour's current strong play isn't all that promising for the future. A sudden improvement on long two-point jumpers generally tends to be fairly flukey, though it's not to say he's doomed to come crashing back down to earth tomorrow or next week. But a full season of Luke Ridnour shooting 50% from the field? Sorry, I'm not banking on it.

The irony is that most of us spent the summer wishing the Bucks had never acquired him in the first place. Afterall, had the Bucks insisted on an expiring contract (like Joe Smith) rather than Ridnour (and his two years and $13 million) in the Mo Williams trade, the Bucks would have had far less urgency to drop salary this offseason. That would have made re-signing Ramon Sessions both more feasible financially and fairly obvious from a depth perspective. Instead, the Bucks were "stuck" with Ridnour. Not the worst thing in the world, especially if you bought into the promise Jennings had shown. Ridnour was a competent but ultimately unthreatening incumbent for Jennings to compete with, and his expiring $6.5 million deal gave the Bucks flexibility going forward.

And while we were all pondering the potential of Jennings and the future home of Sessions, Ridnour was getting healthy after a season of back spasms, knee troubles and a broken finger. You can't attribute all of his recent success simply to good health--this is his seventh season afterall--but it certainly couldn't hurt. And what about the departure of Sessions? Well, Jennings' immediate impact has spoken for itself, while Ridnour's strong play has meant that Sessions would have been fairly redundant as a backup as well. I wouldn't bet on Ridnour outplaying Sessions for much longer, but the Bucks' point guard plan has turned out much better than almost anyone expected. Kudos to John Hammond and company for betting wisely.

That leaves the obvious question: what do the Bucks do with Ridnour from here on out? They might be tempted to hang on to him for their playoff push this year and then try to bring him back at a lower salary in 10/11. A perfectly reasonable strategy, though if Ridnour keeps this kind of shooting up all year, they might be best off letting another team overpay him for a career year that he's not likely to reproduce. Given the Bucks' history with signing role players to bad contracts, simply letting Ridnour walk probably wouldn't be a bad thing. And judging from the current regime's actions last summer, I doubt they'd make an overly generous long-term commitment to a role player--remember Carlos Delfino's three year, $10.5 million deal is only partially guaranteed next year and a team option for 11/12.

Fortunately, Ridnour (and his expiring contract) will also be attractive trade bait to any teams dealing with backcourt injuries at the trade deadline--or simply teams looking to dump salary for expiring deals. Though Kurt Thomas, Hakim Warrick, Joe Alexander, and Francisco Elson also will be free agents this summer, Ridnour would probably be a piece of any potential blockbuster since he has by far the biggest cap number. I'm not sure there are any big names currently available and attractive enough to sacrifice future cap flexibility for, but that could still change between now and February.