MILWAUKEE -- And so this is reality for an average team.

Shouldn't be taken as a slight either, because at 12-16 that label is more generous than anything.

After exciting, excruciating losses against top teams like the Lakers, Magic, and Mavericks, temptation begged you to feel that the Bucks were on the cusp of something you dare not say out loud, but something you thought to yourself with a smile.

But all of the hard-fought games against good teams at the Bradley Center this season, all of the recent success against the Spurs -- none of that history helped in the present.

Tim Duncan was first-class and San Antonio's second-unit was too, as the Bucks just never had it from the opening tip on a holiday-hangover night for Milwaukee. The Spurs led from start-to-finish, enjoying a double-digit lead for most of the night.

The next step isn't always forward, as we are learning the hard way. Just because the Bucks have almost won so many games doesn't mean they will win the next ones.

This made four losses in a row at the BC, and you know a few wins will come soon. But in reality, when you are still average, playing against the really good teams is usually going to end somewhere on the scale of losing.

Hakim Warrick. A few too many of those fading mid-range jumpers for my liking, but Warrick worked it fairly effectively, sinking five of those shots outside the paint. Not bad for guy who hadn't made five shots altogether in a game since Dec. 2 in Washington.

The makes/misses next to the hoop overlap, but as the shot chart reveals, Hak' shot the same percentage inside (3-6) and outside (5-10) the paint, resulting in a fine 8-16 night for 23 points. 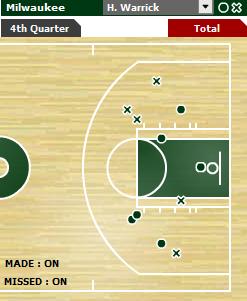 Nice that he made a good portion tonight, but as someone who entered the game at 32.0 % from 10-15 feet on the year, it would be best if his confidence in that awkward leg-kicking-fading-jumper doesn't balloon too much. I prefer him around the hoop, where he dunks and draws fouls. He shot 7-10 from the line tonight, a major reason the score stayed as relatively close as it did late.

Jodie Meeks. The second-rounder earned a season/career-high 28 minutes after providing a serious offensive lift off the bench. He lived up to his advertisement as a long-range sharpshooter, making 3-4 from outside on his way to 15 points. And his decisive, fast runs to the hoop were equally encouraging. Meeks blasts to the basket were as fast as Michael Redd is slow in his journeys to the rim. Whether Jodie will ever possess Mike's crafty body control is another story.

Scott Skiles after the game:

And you can tell, different from some of our other guards, he has a burst of a speed and athleticism which is genuinely NBA-like.

Luke Ridnour. San Antonio's bench just ran all over Milwaukee, but the Bucks' best were also reserves -- all three tonight. Flying ever-so efficiently in the face of logic, Luke keeps shooting like he has all year, making 5-10 tonight, pretty much in line with his 50.7 % touch from the field entering the game.

He packed five assists into his 20 minutes and led the team with a +8 differential.

5. Five straight games with a new leading scorer for Milwaukee: Ilyasova/Jennings in Cleveland, Delfino versus Sactown, Bogut in Indy, Redd against the Wiz, and now Warrick against San Antonio. Just a single win in those games though. Balance is nice, but things workced better in early November when Jennings or Bogut led the way and the Bucks won seven of nine.

12. Andrew Bogut led starters for Milwaukee with 12 points. Meanwhile, McDyess scored 14 points in 17 minutes off the bench for San Antonio.

Jodie. The Bucks have hit on so many second rounders of late that people entered the season with legitimate hopes that Meeks would contribute. And while he has yet to consistently live up to his reputation as a sharpshooter (or even average-shooter), 'twas nice to see Meeks break out a bit.

We have a bit in common, Alexander and I. Same name (Alexander), same age (23), same amount of playing time this season (0 minutes, 0 seconds).

Marcus Haislip. This first-round Bucks' bust finally made it happen at the BC, nailing a three and blocking a shot. So maybe there is time for Alexander. Yes, Good is getting a bit droll here tonight.

A little bit of everything. We move forward each day optimistic that Bogut will carry the club, Jennings will sparkle, Redd will revert back to his old form, and the defense will take care of the rest.

Instead: Bogut blended in, you hardly noticed him on a night when Tim Duncan (26/8/4) was so Duncanish in thoroughly dominating the paint. Young Buck had yet another slow start in contrast to Tony Parker, Redd didn't score or really do anything else, and the 112 points was the most the Bucks allowed since the 112 they gave up over a month ago in their first game against the Spurs.

Luc? Gauging Luc Mbah a Moute is one of those difficult things. He has one of the worst PER's among regulars in the NBA. But we know (and this is one of those times when an annoying cliché is actually true) that you cannot quantify what he offers in numbers.

We have been calling for The Principal to start given his defensive excellence combined with Carlos Delfino's mediocre modest meager vaguely traceable offensive contributions of late (and please don't be surprised that he is shooting under 40.0 % this year, because that's just who he is: an under 40.0 % shooter).

Anyway, Mbah a Moute didn't get in the game until the Bucks were down 74-53 late in the third quarter. In other words, most everyone was playing rather terribly and another opponent had traipsed into the BC and scored at will - and yet no Luc. Now, he didn't come in and turn around the game (it was too late for that and he isn't one to do such a thing anyway), but this just doesn't make much sense, especially considering the timing of it all.

The defense is a given, but The Prince was also coming off a very strong three-game run offensively for his standards: 10.3 points on 66.7 % from the field. He was even getting to the line (!) making 10-16 total in those three.

Skiles' post-game take on the Mbah a Moute situation:

Nothing. I'm just searching right now. Searching for anything I can find.  We've now lost four in a row at home. We've taken a noticeable downtick in the way we've played. And so I've got to try to locate where I can to find someone to get us going.

Maybe not so much. Next up for Milwaukee is a trip to Charlotte on Monday. The Bobcats (tied for 8th/9th in the East with the Bulls) lost tonight, but they are still just a game back of the Bucks... which means another loss could put Milwaukee on the outside looking in at the playoff picture in the top-heavy East -- all before January for a team that started 8-3.