Fear the Sword / Cavs the Blog / Waiting for Next Year

Bogut vs. Shaq. After struggling in the past two games against Brendan Haywood and Ben Wallace, Andrew Bogut's life isn't getting any easier with Shaq paying a visit to the BC. A year ago Shaq dominated Bogut in Milwaukee, dropping 29 on 16 shots compared to just five points on eight shots for the big Aussie. Bogut improved his numbers to a very respectable 15 points (7/9 fg) and 11 boards in the rematch in Phoenix, but Shaq was even more dominant than in the first outing, posting 35 on 19 shots in the Suns' 15 point rout.

After missing six games with a strained rotator cuff, O'Neal has played in four straight, averaging 10 ppg and 7.5 rpg on 50% shooting. He's topped 30 minutes just twice all season, and his combination of injuries and limited burn have allowed Zydrunas Ilgauskas (24 mpg) and Anderson Varejao (30 mpg) to stay plenty involved.

As for Bogut, he had scored at least 13 points in eight straight games before slumping to just eight (on a combined 8/23 fg) in both of the Bucks' road losses in Washington and Detroit. And though Bogut was at least distributing and blocking shots in Washington, he's tallied just 12 boards total in the last two losses.

Jennings' slump. It's now been seven games since Brandon Jennings made more than a third of his field goals in a game, a streak that has seen him on target just 30% overall (38/125). But it's not as simple as Jennings just going cold from the perimeter. In those seven games Jennings has still shot a robust 41% from deep (15/37), so it's been everything inside the three point line that's caused him problems--as reflected in his curious shooting splits: a low 41.5% overall but an excellent 45.7% from three.

How bad has it been? Since scoring 26 in Memphis on November 21, Jennings has shot just 26% on two pointers (23/88), in part reflective of his lack of finishing strength. Still, it's almost impossible for him to get any worse and you'd think (hope?) that there's a fair bit of bad luck mixed in there as well. Per the NBA's Hotspot data, Jennings has been money from the wings and mid-range corners, but misfiring badly from a couple of the midrange zones near the top of the key. He's been ineffective around the cup as well (42%), and in the last five games his shooting in the immediate basket area has been just 24%. Let's hope his efficiency around the hoop picks up before his three point shooting levels off. Full season data: 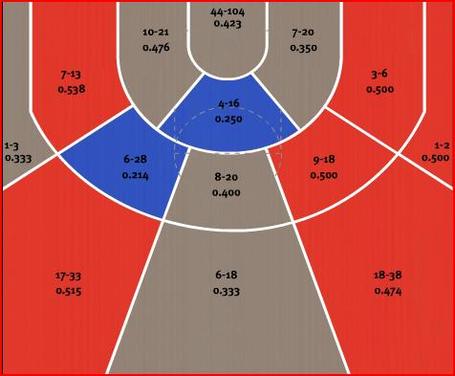 Luc is back, Redd practices. Via Charles Gardner comes the good news that Mike Redd is back at practice. But while Redd will be missing again on Sunday, the better news is that Luc Mbah a Moute finally returned to the court for a 12 minute cameo in Detroit. No one's expecting him to be able to contain LeBron by himself, but at the very least it gives the Bucks a long defender to throw at LBJ if/when Carlos Delfino gets into foul trouble.