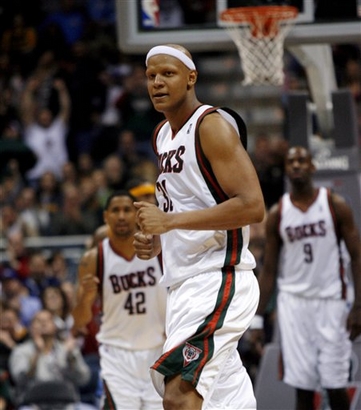 Here's the situation: Fourth quarter (or overtime), less than five minutes on the game clock, and neither team ahead by more than five points.

And now the question: Do you want Charlie Villanueva on the court in the clutch?

Yeah, me too. The guy can score in more ways than other Buck, particularly with Redd shelved. And he's the club's best rebounder, at least while Bogut is sidelined. Defensive ace or not (granted, we're opting for or not in this case), Charlie V is a mighty good choice, and arguably Milwaukee's top overall player this season.

Breaking down the numbers

Upon browsing the work of the stat geniuses at 82games, I noticed that Villanueva isn't quite one of Scott Skiles' very top choices this season to play in the clutch.

Please read before trying to make sense of the chart below: 1) The first column represents the number of minutes Milwaukee's top eight players have played in the clutch, according to the definition in the first sentence of this post. 2) The second column is the the number of total minutes played this year, to provide context. 3) Finally, I divided the two numbers in order to give a rough representation of how often they play in the clutch while controlling for how often they play in general.

For an extreme example, if someone played 20 in the clutch this season, and only 30 total, that would mean they have played 66.7 % of their total minutes in close and late situations. As such, it would be pretty obvious that the team's coach views said fictional player as a late-game specialist.

I'm not sure which part is more surprising: that CV is fifth in clutch minutes, or that CV is fifth in total minutes. In any event, Redd/Bogut were clearly favorites to play in clutch situations, while Jefferson and Ridnour (really) are preferred among actives. Incredibly, Redd and Bogut have nearly as many clutch minutes despite playing hundreds fewer minutes overall.

Making a case for Charlie

The next logical step is to examine how these guys have performed in the clutch.

Among the eight players listed above, Villanueva stands out as the one who improves the most in the clutch. He is shooting 53.8 % in the clutch, compared to 45.7 % overall. In fact, Bogut (64.3 %) is the only other guy who is shooting above even 44.0 % in the clutch among the above eight. Ridnour rounds up the rear at 34.5 %.

There are plenty of factors that can make the meaning of these numbers murky. First off, the mere definition of "clutch" is inherently subjective. How much would things change if we only included the final two minutes of games, and a three point game? Maybe not dramatically, but it would surely alter the numbers a bit.

Another example: Players in foul trouble (or who have fouled out altogether) are naturally more likely to be on the bench late in games. Big men are more often in foul trouble, potentially tying coaches' hands in these situations.

Small sample size is the most obvious issue when considering clutch of course. As you can see, clutch minutes are a very small portion of overall minutes, and aren't representative of a player's overall production.

It's also worth considering that a five point lead is a different situation than a five point deficit. Along with matchups, that can be the difference between playing Luc Mbah a Moute to protect a lead and Villanueva to score quick points.

As such, small differences are surely best off ignored. But a few of these differences seem substantial enough to at least make you consider the question: Do you really want Charlie Villanueva on the bench in the clutch?