Share All sharing options for: Andrew Bogut is Stylin' 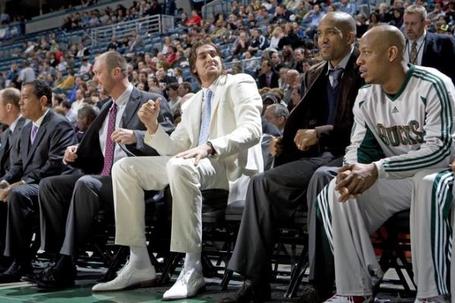 I kept meaning to post this picture, so forgive me for taking so long to get to it. I first mentioned it three weeks ago in recapping the Bucks' 122-110 win over the Pacers, but didn't see an online picture until there was an excellent RealGM thread about it afterwards. I could probably write a few thousand words abut this outfit, but on the other hand I think it speaks to each of us in our own way. Fortunately, Drew blogged about it so now we have his side of the story:

Now without further ado, time to talk about the white suit. Last Wednesday vs. the Indiana Pacer I wore an all white suit. White shoes, white socks, white shirt. Only thing that wasn’t white was my tie. If I had a white tie I was going to wear it but it’s in my Australian wardrobe back in Melbourne. So I had to go with a light blue. Why? Well I have been the locker room joke lately with some of my outfits. Usually I’m pretty neutral. Keep it simple you know. Not only that, I like outfits that come on just as easy as they do off. The week before I wore jeans and a shirt with a tie, top button undone, you know the more casual but half business look. I was informed by a fair few of the lads, and the coaches that I looked like a punk rocker for the 60’s. That made my day, ‘cause it was the look I was going for. I would have loved to live in that era, and to drive the cars of that era while they were brand spankers would have been the icing on the cake. The consensus was 0 out of 5 after coach put a rating chart on the whiteboard before the next practice. That’s part one of the story.

Part two is that I love to wear white loafers with jeans and a casual shirt and jacket. Apparently there is a unwritten rule somewhere that White shouldn’t be worn until after Presidents day, which I believe is this Monday? So after my poor rating punk rock look, I decided to step it up a notch. Knowing that President’s day had not yet passed what better than a white hot suit in the middle of a Milwaukee winter. I think if you were at the game you will undoubtedly agree the price of admission was a bargain. On top of that the new consensus rating out of 5 from most of my team mates was 5. Not a bad average I’ll say. 2.5 is pretty steady and now I can sleep like a baby at night! If you have some ideas what my next outfit should be feel free to let me know (keep in mind we do have a dress code in the NBA....apparently?). Oh and we got the WIN!