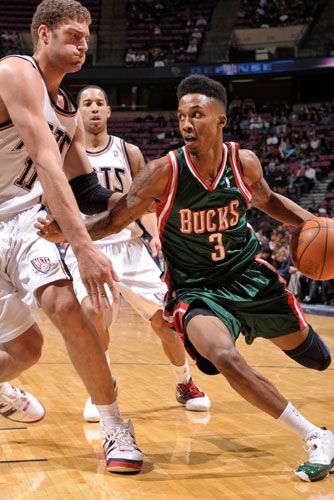 The high top fade is officially back

JS: Alexander returns to practice
After more than two months of rehabilitating his torn hamstring, Joe Alexander finally returned to practice this morning.  Charles Gardner writes that Alexander won't be going full speed quite yet, so I'd guess it may be a while before we see him in game action.  Still, it's a start.

"I don't make unrealistic expectations for myself," Alexander said after he went through Wednesday's non-contact workout at the Cousins Center. "That's just going to set me back. What I am actually able to do is contribute at least a little bit, at least enough where coach will be able to say, 'I might be able to use Joe a little this game.'

"That's all I'm looking to do, really. I just hope to be another piece to the puzzle that he can use."

It's hard to say how much of a chance Alexander will have to prove himself. Certainly, the Bucks' decision to decline his 10/11 option doesn't work in his favor, but you could also argue (or hope) that the Bucks will want to get a look at him before he becomes an unrestricted free agent this summer.  Either way, don't expect Skiles to do him any favors.

I would think Alexander will be eager to move on to a new team after the embarrassment of having his option declined, a move which suggested Alexander struggled with more than just the on-court side of being an NBA player.  But it's not to say the Bucks have their forward situation sorted out, either.  As much as I like Mbah a Moute and Ilyasova, both guys are still role players rather than long-term starters at this point. And while Alexander is justifiably well behind both guys on the depth chart, he could still be a useful player for a team lacking certainty in its forward rotation.  As we saw in summer league, his first step makes him a tough cover for bigger forwards and he's able to draw fouls much better than Luc or Ersan.

Aside from those two, Hakim Warrick will probably be elsewhere by the end of next summer, while Delfino's partially guaranteed contract means he could also be looking for new employment next summer.   I'd guess Alexander moves on to greener pastures as a free agent, but stranger things have happened.

Bucksketball: Measuring Mbah a Moute
Jeremy takes a look at the progress of the Bucks' other 2008 draft pick.

All summer we heard about how hard Luc was working to improve his jump-shot, well he’s still working and it still isn’t all that improved.  The Prince is actually shooting a worse percentage from 16-23 feet this year (32) than he was last year (36).  He seems to be thinking about it more when he catches with an open mid-range shot.  It’s as if the process going through is mind is, "Everyone is telling me I need to be able to hit this shot when it’s open and I’m not completely confident, but I have to shoot because I am incredibly open right now, so I’ll see what happens when I throw it up there."  And that doesn’t seem like the recipe for success.  But there are clear signs of improvement elsewhere on the court.

Mbah a Moute's defensive versatility, intensity and instincts are all still there, and on a team like the Bucks that alone should guarantee him at least 25-30 minutes every night.  But his lack of offensive improvement is a bit worrying, if only because it's been a reality check about his ultimate potential as an NBA player.  Aside from the shooting problems Jeremy mentions, Luc's high turnover rate has risen this year (13.1% of possessions to 14.2%) while his rebounding has dropped off (13.6% rebound rate vs. 10.1%).  Part of the latter decline can be attributed to playing more small forward rather than power forward, which means he's been playing further away from the hoop on both ends.  Jeremy's spot on that numbers will be able to fully quantify Luc's contributions, but they also reflect a genuine lack of improvement from his rookie season.

Team Rankings: Bucks' struggles in transition and at the rim
As I mentioned after the Nets' game, the Bucks score just 10.1 pts/game in transition, ranking them 27th in the league.  That alone isn't shocking--doesn't it seems like the Bucks' favorite play in transition is an open pull-up jumper?  But it's a bit surprising when you consider a number of factors that would seem to work in favor of a fast-breaking game: they rebound on the defensive end (3rd defensive rebound rate), force turnovers (3rd in turnover rate), and play at a faster-than-average pace (12th).

So why so few fast break buckets?  My assessment is that it's largely a personnel issue.  In contrast to teams like the Hawks, Warriors, and Sixers, the Bucks just don't have the kind of athletes that can run and finish on the break.  The Bucks' fear of attacking in transition is also less surprising when you consider that they're also last in the NBA in "at the rim" fg%, and their inability to draw fouls makes their inside finishing an even bigger liability.  Not surprisingly, they're also near the bottom of the league in points in the paint (27th, 37.0 ppg).  The problem of course is that all this makes Milwaukee highly reliant on executing in the halfcourt and making jump shots, which isn't exactly ideal for a team with only one post player and a general lack of shot-creators.  Easy points off turnovers helped turned the tide of the Nets game, and it'd be nice if the Bucks developed more of an attacking mindset--even if their personnel may be somewhat limiting, they're still likely to get better shots than out of the halfcourt.