As part of our weekly attempt to divert attention from preseason boredom (and injuries), here's Jacob's latest Bucks Twitter roundup. No need to waste hours of your life reading about Brandon Jennings' love life or wading through shirtless photos of Corey Maggette--that's what we're here for. And if you have succumbed to Twitter addiction, follow Jacob @speedingtime234 and Brew Hoop (@brewhoop).

I'm a bit late, but so is a big chunk of the Bucks rotation, amiright? Hit the jump for some SCANDALOUS Twitter info!  (Oops, forgot, this isn't a tabloid magazine....)

All the way back against Washington, Pre-Bogut, you may recall that a certain trigger-happy cowboy left the game early because of a knee injury, ironically not long after he was fined for faking a knee injury to give Nick Young more minutes. Andrew, take it away.

So did Gilbert Arenas get hurt tonight for real or what? Whats going on in DC, he played 3 mins!

Don't think we didn't see that subtle jab, Andrew!  This means Arenas is going to have to meet you outside the old saloon at high noon.

And at what was supposed to be Bogut's return in Memphis, he got treated to Memphis' best hotel room.

Pic from the door to walk in room. Looks bigger in pic, But its small. I cant fit in bathroom have to crawl in 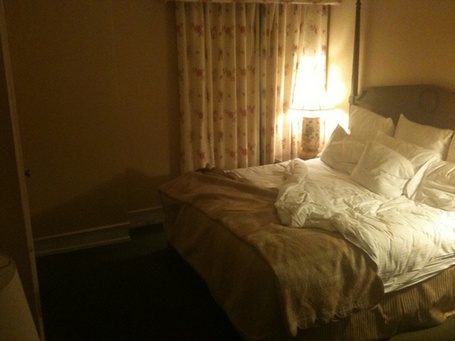 Yeesh.  No wonder he had a migraine before the game.  And apparently it's Memphis' "best hotel."  Yeah, how about not.

This is memphis' best hotel apparently. I bet Elvis got a better room haha. I know i know im not Elvis but one can dream:)

You're already better than Elvis. Don't be so modest. [Fact: Elvis had a terrible left hand. Advantage: Bogut - Frank]

And of course, Bogut received a tweet regarding everyone's favorite past time, making "small person" jokes about Earl Boykins (finishing just ahead of fat jokes about Tiny Gallon).

Our Aussie readers might want to shield their eyes from this one:

One of our assistant coaches (not naming him) today asked me what Aussie meant? I didnt know whether to laugh or cry.

Horrific.  Dang you, Joe Wolf. (You know that's who it was.)

Carlitos thinks about Tweeting in English more, likes his team

Great W @ Whashington,can't wait to have all team healthy! We're going to' be really good!

Of course you wouldn't expect someone to say something negative about their team, but It's nice to hear that Delfino is feeling confident.  Hopefully he can transfer some of that confidence on to the court.

Talking to Brandon on Twitter, Delfino dropped this gem:

@BLKICE3 I should start tweet more in English...BUT... do I have fans that want that?do I have Americans fans?wanna see...

Carlos, you don't know the half of it. We here at Brewhoop Incorporated are certified Delfino fans  Maniacs.  If you tweet in English we (or at least me....) will read.

Just bought a mullet wig. Why? You may ask? Because I believe every person should either have a mullet or own a mullet wig.

Truer words were never spoken.  I myself bought ten of them today.

We all know about the new tech rules being enforced by Stern's zebra helpers.  If I do say myself, they've taken it too far.  I'd like to stop the obnoxious whining that happens all the time, but in the preseason they've been calling techs for showing any emotion. One such victim was CDR.

I assume he's calling himself dumb for garnering a tech, but he could be subtly calling out the league.  I don't know, just a feeling...

Who's the flyest of them all?  Ask him.

Jus washed my face.Asked the mirror "who is the flyest of em all?" was a rumble,5mins it lasted the mirror said "U are U conceited bas****!"

Hilarious.  So, what has CDR been doing when he's not playing?  Getting into tip top shape.  He's specific too.

Day off. I'm still goin to get some cardio & some shots up. Coach Skiles want me to be in Rip Hamilton shape so that's what I'm going to do.

Hmm.....do Skiles and the Bucks want him to be a Rip Hamilton-type player?  Seeing as Hammond worked with the Pistons and brought in Rip, he might have seen a bit of Hamilton in CDR.  They are of similar build, I'm just curious as to how you can be in Rip Hamilton shape....

Because you can never have enough CDR, Jake LeRoy from Bucks.com has provided some extensive CDR Twitter documentation.