We're now on the verge of the Bucks season, kicking off things with the first preseason game for the Bucks tomorrow against the Boozer-less Bulls.  As you can imagine, the Bucks players have toned their tweeting down a little bit, especially with the sad news that CDR is trying to tweet less by going through "Twitter rehab." (Say it ain't so!) Well, almost all the Bucks players.  Tiny Gallon just won't slow down.   If I thought the amount of his tweets clogging the Bucks players' feed was bad before, now it's... more.... bad.  I'm waiting for Skiles to create a Twitter and take "disciplinary action" against Mr. Gallon.  Well, unless the sky falls we'll only have to put up with this until October 27th.

Tiny does... Whatever Tiny does

You better enjoy this, people... Well, okay, it's not so bad, because Tiny has some of the most amusingly pointless tweets at all time.  You can't help but shake your head yet laugh at the same time.

You heard it here first folks, Tiny is the 4th member of the Heat's superstar squad.   If he can get his "mama's" permission first.

Not quite.  Sorry to say, he won't be joining you in Europe.  Oh, and why hasn't he been fined yet?

I wonder how Tiny  "focuses" . I always thought playing video games was how he focused.

I've seriously lost count of how many times Brandon has "quit" Twitter, but by now it's always a sure bet that he'll be back.  Just happens that this retirement was a bit shorter then the others...

Drake verse on Deuces (remix) that's how I feel

Aaannd, life has gone on in Brandon Jennings Twitter world like nothing happened. Funny how stuff works out sometimes...

Squad Six Auditions were last week, and I can assure you, there were some great performances.  Bogut no doubt agrees.

YOU HAVE TO CHECK THIS SQUAD 6 TRYOUT VIDEOhttp://www.youtube.com/bucksdotcom#p/u/2/AFZwj4QkAcc THE BEST AUDITION I HAVE EVER SEEN!! FTD!!

That's the most excited I've ever seen Bogut on his Twitter.  It's on, people...

Man Migraines suck! People who get them would know what im talking about. They are not headaches, two different things...

Remember the Knicks game at MSG where Bogut got a migraine and had to leave the game?  Yeah, that sort of kind of really sucked, but we still toughed it out in the end despite virtually letting the Knickerbockers get their way in the paint.  Lets hope we don't see more of those in the future, we already have enough to worry about with Bogues.

Hobson is ready for the Heat, goes to team Dinner...

Even though Hobson likely won't be around for a lot of these games, that doesn't mean he isn't excited for the season.  More so, he's excited to take down the Heat, at least's that's how it seems:

Make sure you have your scouting report in hand.

Getting ready for our team dinner !

Team Dinner?  Well, I'm sure Skiles didn't even have to ask what Sanders wanted.

Hobson has also seemed to have made some reptilian friends.  How they got there, I don't know, but they're here! 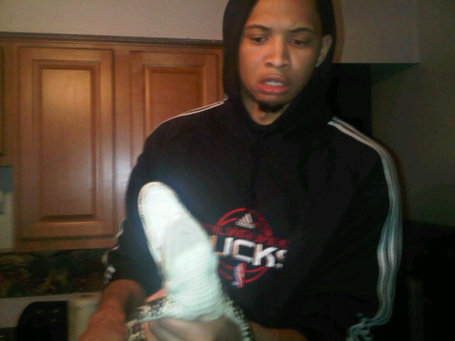 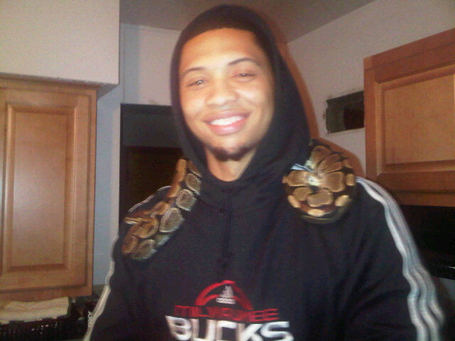 I'm no expert here but I believe the bottom picture is a snake.  Shocker I know.

WARNING:  The following tweet displays the exact opposite of Corey Maggette's reputation.  You have been warned.

Team is about sacrifice. Believing in someone when no one does. Trusting in every player,coach, staff member. Because the common goal is

You tell 'em Corey.  Yes, I believe Corey will fit in, at least emotionally, fine with the Bucks, it's just the little (or not so little) things like fitting in to the defensive schemes and ball movement.  I'm confident though, but going from Don Nelson to Scott Skiles is still a huge culture shock.

Rehab or not, the show must go on!

Guys, the only thing I'm going to ask of you is NOT to send me ANY articles written about me. Good or bad. I don't read on myself. Yes yess

Curious as to why.  Is it an ego thing?  Or does he just get uncomfortable reading about himself?

And, I never thought I'd say this about something from Twitter, but this might become one of my favorite quotes about the NBA and sports in general:

The summer is the time to be selfish. Individually get better. That's over. The fall & winter is all about team. Milwaukee Bucks. Yes yess!

It's very true.  During the summer, it's all about getting better, (For most players not named Eddy Curry, of course) making sure nobody gets in your way.  When Fall comes around, it's time to work as a team.

I've never gone into a season like this.I WONT be very Twitter active & I'm Considering NOT having a cell phone.Jus focusing 100% on hoops.

You can't do this to us CDR, you just can't.  Can't you sense my sheer desperation through the text?  This thing will be so much blander without you...  But seriously, this is awesome.  He seems genuinely pumped for the season, As he should be.

I leave you with this:  At http://buckscast.podomatic.com/, you can find Dakota's interview with the Ham Slamwich himself, yes, Darvin Ham.