Share All sharing options for: Bucks Shot Locations and Effectiveness

Three games in, the Bucks sit at a mildly disappointing 1-2 record. While the loss in New Orleans was disappointing, the Hornets were at home in the season opener and were obviously fired up. The disaster in Minnesota, though, was inexcusable. The Bucks really put forth a pretty miserable effort and threw away what should have been a relatively easy win. More than anything, it just boiled down to Milwaukee poor shooting.

I frequently hear about the Bucks', specifically Brandon Jennings', problems with shot selection, but wanted to know if that was truly the case through three games. After the jump is a graph of the Bucks' shot locations and how effectively they're turning those shots into points. 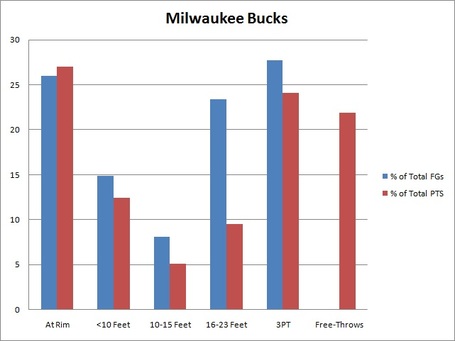 For comparison, here's the same graph with league-average stats: 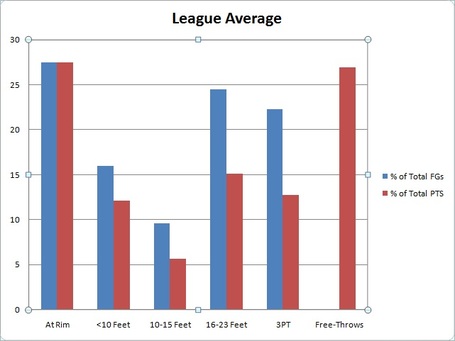 In actuality, there isn't a whole lot of difference between the Bucks and an average team, which in itself is the real problem: the Bucks are better than an average team this season. What's held Milwaukee back has been its poor shooting on long jumpers and struggles at the line. That second point might seem questionable after Milwaukee's 23-27 performance against Charlotte, but keep in mind that a few crucial missed FTs against New Orleans ended up being their undoing. They've had to compensate by getting a much larger chunk of their points from behind the arc, but their poor shooting from that range was what did them in against Minnesota.

Consider this too: According to Hoopdata.com, the Bucks's "expected effective FG%" given their shot selection is 48.7% (effective FG% accounts for the added value of three-point shots). That is, if Milwaukee shot league average on all their shots, they would have an eFG% of 48.7%. In fact, the Bucks actual eFG% is 45.5%.

The ratio between those percentages measures how much a team is being helped or hurt by their shooting. Milwaukee's 0.93 ratio is tied for 5th worst in the league. That's the kind of stat that we would expect to level out at least near 1.00 as the year goes on, or even above 1.00 if the Bucks shoot well.

The important take-away here is this: the Bucks are largely shooting the right shots, they're just not making them. When everyone gets healthy and the shots start falling, the improvement should be quickly apparent.