For quick access to all your Bucks-related Twitter needs, check out the new Bucks Twitterverse widget in the left sidebar.

Well, here we are.  Nine games into the season, and just like we expected, the Bucks sit perched a top the Central division...Oh, silly me. We're 4th in the division.  But we've won two straight, and the Bucks' Twitterverse is a lot happier place to be when winning happens.  Or at least I'm forcing myself to believe that.  Viva the Jump!

Bogut searches for the cure, talks about his arm, prepares for a lockout and more

If you count preseason games, Bogut has missed 3 games the last 2 years because of that little thing called migraines.  It's been a bit frustrating, especially because there's no way to prepare with it.  Rest assured, Bogut isn't a big fan of having them either.

These Migraines are pissing me off. But the win has eased my pain. Heard @SquadSix rocked Indiana. Area50 who? So happy we won.

I can only imagine how it feels for him considering all the work he puts into this, and just how much it must suck to have migraines overall. He was out on Twitter later asking people for quick-fixes for migraines, and he seems to have settled on something:

Great day for a day off training. Get the body right. Acupuncture later too....

Acupuncture has been known for being effective in treating migraines, so we'll see what happens...  Seeing Bogut covered in needles isn't a pretty picture...

Important practice tomo followed by a meeting with my financial advisor. Gotta start preparing for a potential lockout now, just in case.

Who knows why his practice was important, but what I mostly took away from this is that he's preparing for a lockout.  Of course probably all of the players are, and "just in case" is probably just a formality at this point.

For people asking: my arm isnt great and it wont be all season. Im trying to forget about it and play, yes it is tough, but ill be fine.

How long does this take to heal?  Is this something that will stick with him past this year?  It's hard to tell if it's affecting him at all on the court, but I think he's playing more than respectably.   We can only hope this doesn't worsen as the year goes on...

So apparently CDR has a large following.  After all, we have a poster on here who's named after him and now this, @TeamCDR.  Apparently he's his biggest fan?  Anyhoo, Chris Dougey himself retweeted this tweet, so it must mean something:

...I don't know how he got that information and I'm not sure I want to find out, but get well soon, Dougey!

Brockman and the littlest Bucks fan

This has been linked to in the comments and has been spread about the internet already, but Brockness took notice of it so it must be really important.

Team dinner tonight, this should be fun. You never know what's going to happen when this group gets together. We have some funny dudes!

Yes, I'm sure Gooden is the life of the party. And I'm sure they talk to Redd via satellite in his Columbus estate.  His spot at the dinner table has no doubt been taken by Corey Maggette.

Can ya'll make Sure Grant Hill see this my homie said he might retire after he see this, hahaha!!!! http://yfrog.com/n5q2uuj 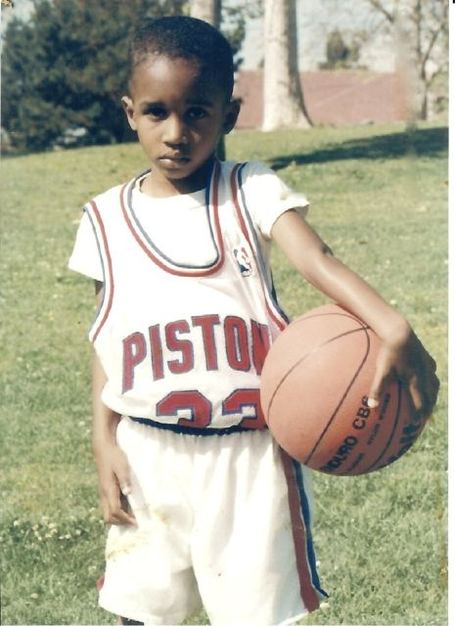 Sidenote:  What he didn't tell you was that this picture was taken right after he dropped 55 in a game of one-on-one against a kid in a Chris Mullin Warriors jersey.

I was going to add in that Hobson tweeted that he started crying when he saw that Landry Fields was starting for the Knicks, but he has since deleted that tweet.  Not the first time I've made note of one or two of his tweets only to see that he deletes it later.  Boo!