Share All sharing options for: Hornets 87, Bucks 81: Chris Paul And David West Did This Last Week

It has not yet mattered who the Hornets play. And it never really matters who guards Paul.

The Bucks stuck Luc Mbah a Moute on Paul down the stretch of the fourth quarter, and The Prince assumed ideal defensive position, moved his feet, and used his length. And Paul scored six points in the final six minutes, including a floater that sealed it with 21 seconds remaining.

Reporter (not me): How disruptive was Mbah a Moute... with his range it seemed like he did give you a little bit of a problem in terms of where you wanted to go.

Paul: (Pause) I don't know about that one.

The Hornets stayed perfect despite being extraordinarily imperfect tonight, but Paul is just about the perfect point guard. Early in the fourth quarter he came over and rode a stationary bicycle a couple feet from me. After a minute or two, he jogged back, went straight to the scorer's table, checked himself into the game, and checked the Bucks out of the game.

New Orleans led by 11 entering the fourth but the lead was sliced to seven when Paul checked in with 9:18 remaining. After getting (very close to literally) nothing from Brandon Jennings and John Salmons heretofore, Jennings and Salmons each made threes and the lead was down to 70-68 with 6:18. That was the closest they got. Mbah a Moute subbed in to guard the point guard, but Paul hit a quick shot right away, made another a couple minutes later, and then clinched the win with a drive and nine-foot floater to make it 86-81 with 21 seconds.

This was not Paul's best game -- pretty average for his standards. But his standards are the highest, and he combined with David West for the second time in nine days to beat the Bucks. West (25 pts, 6 rebs, 4 asts, 2 stls, 2 blks) was a skying tower of offense. The Bucks tried Mbah a Moute on him too at one point, but there was no stopping him.

So far this reads more like a Hornets win than a Bucks loss. But Milwaukee did at least as much losing as New Orleans did winning on Saturday evening.

Andrew Bogut. Not sure how he avoided getting another headache watching his teammates plays "offense" but 'Drew bounced back with a major showing. Unfortunately, said teammates neglected to find him in the fourth quarter, as Bogut was held without a field goal attempt in the fourth quarter...despite playing most of fourth. It was a guard's game in the final period, Jennings and Salmons got hot, and the Bucks actually dropped what is at this point an unheard of 27 points in the final 12 minutes. Getting a big man shots isn't the easiest thing to do in crunch time, but neither is beating an undefeated team, and coincidentally (not coincidentally) neither happened for the Bucks.

Nevertheless, Bogut scored 19 pointson 7-11 shooting in the first three quarters and even made 5-6 from the line, so it's not like the Bucks had good reason to worry about Hack-a-Bogut late. He added 14 rebounds and some nice interior passing, though his on-court chemistry with Drew Gooden remains a work-in-progress, which begs the questions whether on-court chemistry with Gooden has been a ten-year work-in-progress for nine teams and more than a hundred teammates.

I hope our bar isn't so low that we say 3-11 (shooting) is playing so well... I'm not trying to short-change Luke, who did play a good game tonight, but we are trying to find some balance on our team right now with the starters and the bench players. And if every time something goes wrong we think about yanking someone from the lineup, it could be a very long year.

For what it's worth, both Gooden and Mbah a Moute played the majority of the fourth quarter together, and Mbah a Moute started the second half after Delfino left the game with a neck strain.

Mbah a Moute was 1-3 on those corner jumpers, and I don't think they will be running plays for him yet. But at least he is trying out there. Maybe (probably) everyone is, but he sure makes it obvious. Down 84-79 with two minutes to go, he got the ball in that usual corner jumper spot, pretty open, and drove ferociously to the rim for a dunk, got blocked, retrieved the rebound and went up for and-one (except it wasn't really an and-one because he missed the free throw). It was all very Mbah a Moute.

Brandon Jennings. Heated up in the too-little too-late fourth quarter, knocking down a couple threes, but didn't ever really command the game, which is understandable given the competition. But the team needed a star performance from Jennings to beat the in-form Hornets, and in the end his 12/5/2 line felt just like a 12/5/2 line.

4. The Hornets traded away Darren Collison because he was so good as a rookie, and now they have Marcus Thornton playing four minutes? Can't argue too much with 6-0, but I wouldn't mind starting Thornton at the two for the Bucks right now with the way Salmons is playing.

83.3 % David West shot 10-12 (.833) from the field, managing to outdo himself after making 9-13 (.692) in the season-opener in New Orleans against Milwaukee. And while West is a really talented offensive player, it's not like he usually shoots an exceedingly high percentage from the field for a star big man: 50.0 % this season coming in and 48.7 % for his career (Drew Gooden is 47.1 % career, for comparison).

Paul. Favorite player to watch in the NBA. And now I get to watch him and want him to win, because...

No more New Orleans. The Hornets are 6-0, and maybe they are a legitimate title contender. More likely, the Bucks just caught them at their best. Either way, the season series is over on Nov. 6 and that suits me just fine.

Fourth quarter backcourt. The top scorers from last season, John Salmons and Brandon Jennings, didn't do much of anything for three quarters (combined: 7 points, 0 free throw attempts), and that resulted in the Bucks running an Earl Boykins/Keyon Dooling backcourt for the final 6:28 of the third quarter and an 11-point deficit. Boykins actually made a jumper on the first possession and finished the third with a floater at the buzzer.

So while the deficit was too much to overcome, at least Salmons and Jennings thought about things on the bench and delivered some sorely needed offensive punch in the fourth quarter: Jennings hit a pair of threes, Salmons made four free throws, and the starting backcourt pair combined for 19 points in the fourth, just like old times, sans some poor decision-making by Salmons in particular on a perfect pass to Davis West that sealed the loss down 86-81. See, I can be negative here too.

Blue circle on the right. The first half was back-and-forth sloppy, the Hornets were coming off a high-stakes win the night before against Miami, and there wasn't much to dissuade me from feeling that New Orleans was just maybe due for a loss. But then, down 38-35 with two seconds before halftime, Marco Belinelli heaved in a 68-footer. And this was not the night they would lose for the first time. That doubled the deficit, and those three points actually proved quite decisive in the low-scoring, close game. 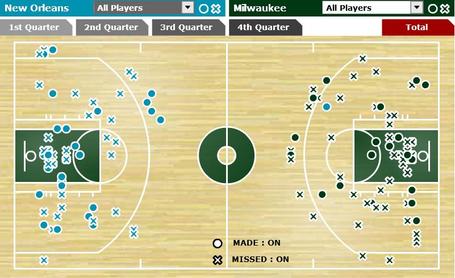 Offense-ive. The Bucks continued their dreadful run of offense by hitting 38.6 % from the field, 25.0 % on threes, and 65.0 % from the line for 81 points. Everyone assumed the offense could only get better after ranking 23rd in offensive efficiency, and they still probably will, but this is a real and extended shooting and scoring rut.

Defending point guards. Our pregame notes revealed that starting centers had scored a combined 12 points on 4-17 shooting in the five games started by Andrew Bogut. Pretty incredible lack of offensive production, and pretty much the opposite of what opposing starting point guards have produced against Milwaukee in this young season: every point man has put up at least 12 points individually against the Bucks. Granted, Milwaukee has been dealt a rather robust stable of opposing point guards early on, facing the world's best (Paul) twice and a top five point guard (Rondo) in the first six games.

It's always difficult to judge individual defensive performances, but by the end of last season some of the advanced metrics painted a favorable picture of Jennings' defense (for instance, opposing point guards averaged a modest 15.8 PER against Jennings in 09-10). And the idea was that while Keyon Dooling wouldn't replicate or even do a bad impression of Luke Ridnour offensively, he would at least be better on defense.

But seven games into the season, Jennings has only outplayed the opposing starting point guard twice, and that might be generous: His triple-double was great, but keep in mind D.J. Augustin dropped 26 points on 13 shots along with 5 dimes and one turnover, and Jennings sort of got the better of Darren Collison last night in Indianapolis, though he scored less, shot a worse percentage from the field, and Collison made 8-9 from the stripe and added five steals.