MILWAUKEE -- The Miami Heat are a better defensive team than the Bucks. LeBron Raymone James, Christopher Wesson Bosh, and Dwyane Tyrone Wade, Jr. are three of the finest offensive players of our generation. And the Milwaukee Bucks are an historically bad offensive team.

Before the game, these were three facts.

And thus the feelings of pregame helplessness and postgame realism.

Don't get carried away about the defense part in the lede, because the claim that Miami is better was purely a statistical one, and both are so very good that there isn't much difference. But when the Bucks run up against a team as good or better than them defensively, it's trouble. Because no team is as bad as them offensively. And the Heat are clearly quite good on that end too.

Miami has fallen short of great expectations just as Milwaukee has fallen short of good expectations, but this was a fifth straight win for the Heat and no one should be surprised if they have the best record in the East by February or are in the Finals in June. The Heat are very good, and so this really wasn't a bad or terribly concerning loss, and that is important.

Miami hasn't yet beaten good teams either. In fact, both teams have beaten the Hawks and Magic, and not much else. But the difference is the Heat are beating bad teams, and beating them badly. And at 7-13, Milwaukee can do little to rightfully argue with that label.

The matchups didn't seem so terrible -- the Bucks had a defensive specialist for James in Mbah a Moute, a springy and mobile defender for Bosh in Sanders, and one of the best rim-protectors of all for a team with the best of slashers.

But two ferocious James dunks in the opening minutes quieted the crowd and all that you could hear and see after was that the Bucks were short on star quality and team unity. The Bucks played everyone -- all 11 players who suited up -- but none of the combinations really worked. They came back a bit in the fourth quarter, bringing to within three points at 74-71, but three players you may have heard some chatter about over the past few months -- James, Wade, and Bosh -- took turns scoring to make it 80-71, and once again the Bucks were battling more to get into the 80s than to actually win. They lost on both accounts this time.

Corey Maggette. Milwaukee's offense was at its worst when it was painstakingly boring, routine, and slow. But even at its best it was more of the the same. Maggette scored 20 points on eight shots thanks in part to his first three-pointer since November 10, but mostly because he just rammed his way into the lane and drew fouls, or leaned in against defenders and drew fouls. The same kind of visually displeasing but effective stuff that made Dwyane Wade (7-10 free throws) the player of the game (and also a Finals MVP once upon a time).

And so you get the feeling that the Bucks aren't at their best when Maggette is the player of the night.

Zydrunas Ilgauskas brought Bogut out to the perimeter on a 17-foot miss in the first minute of the game, and coincidentally Bogut spent little time deep in the post offensively himself. Whether it was Ilgauskas or Erick Dampier or Joel Anthony guarding him, Bogut rarely was able to stake a position in the paint.

To compound this troubling matter, Bogut plays for the Milwaukee Bucks. A team which at present does not exactly spread the floor.

Bogut still scored a team-best six points in the third quarter -- the only winning quarter and the only one in which they scored a reasonable amount (24) of NBA points. And he was also pretty much the only Buck corall rebounds (13).

Larry Sanders. The rook made a nice turnaround jumper on the baseline to start the second quarter. But that encouraged him a little lottle too much, because he took and missed his four other shots outside the paint, none of which were particularly rational. I wouldn't necessary say "crazy," but Scott Skiles would/did:

He's getting better with the things he's doing out there. You could tell tonight to start the game he was a little jittery, every time he caught it he wanted to score. He took a couple crazy shots, but in general, he's getting a lot better, and we'll keep putting him out there.

Sanders didn't quite shut Chris Bosh down, but he did a fine job limiting the star power forward to 16 points on 17 shots and zero free throw attempts. A couple more blocks (and a goaltend), and we don't know his ceiling yet but with this sort of defense we also know the floor isn't that low.

-13. The Heat pulled in 48 rebounds compared to 35 for the Bucks, a pretty major negative differential for one of the best rebounding teams in the NBA. In particular, you can't allow the opposing two guard (even if it is Dwyane Wade) to haul in 14 rebounds all by his lonesome, including five offensive.

Speaking of offensive rebounds, what ever happened to Ersan Ilyasova getting all of those tip-offensive rebounds? The Heat seemed to get a bunch of resets on those tonight. Ersan? Three total rebounds in 22 minutes, one on the offensive glass.

The fact Milwaukee only turned the ball over nine times and still managed to score just 78 points is a testament to just how inept they are converting in the halfcourt offense. The Bucks made 5-6 on the fast break, which means they made 22-72 (.305) in the halfcourt, which is bad for their standards, and they have the lowest of offensive standards.

6. Carlos Arroyo made all six of his field goals, including two three-pointers. And he also hit all four of his free throws. Arroyo came into the shooting 47.4 % from the field, virtually identical to his mark last season, 47.5 %. But he sure lived large off the open looks afforded by playing with LeBron and co. tonight.

Next. The Bucks stay at home to face the Pacers on Wednesday, and while Indy went for 124 tonight and have hit the century mark in six of their past seven games, Milwaukee already beat them in their place this season by a 94-90 count -- and that was without Bogut. The Central Division is pretty pathetic -- the Bucks are still tied for third at 7-13 and just 4.5 games behind the Bulls. The Pacers have been a pleasant (or unpleasant) surprise at 10-9 though, and they seem legit enough to challenge for a playoff spot. The Bucks at least managed to split against the Floridian teams, and now the Pacers and Rockets should be more manageable.

Close. Despite another horrific offensive performance, the Bucks trailed by just three points with less than six minutes to play in regulation against one of the hottest teams in the NBA -- this is the kind of thing losing teams grip to, but that's where we are.

Larrylight. Brandon Jennings tossed up an alley way up -- surely too far up for most -- but Larry Sanders was lightning and thunder on the oop, bouncing up and bursting down on the hoop for one of the plays of the year. I will hook up the video here if/when I locate. Update: Here is the throwdown...

LeBronlight. You sort of had the feeling that this would not be Milwaukee's night on August 10. But if there was any lingering doubt, James took care it by about 7:20 p.m. tonight, with two massive slams in the first four minutes of the game, including this first one over both Andrew Bogut and Larry Sanders:

Up and down. Mostly down. Not that this will come as a surprise, but the Bucks have only strung together two good offensive performances in a row once all season -- almost a month ago against the Knicks and Hawks when they dropped 107 and then 108 points in a pair of wins. Those games also coincided with the team's only winning streak of the season, when they won three in a row (they went on to beat Golden State with 79 points). Other than those three wins in five mid-November nights, they have not even posted back-to-back victories.

(Wishing I had stats to refute this to place here.)

Big Three. Not that we expected them to outplay LeBron/Wade/Bosh, but their sterling performances in the win over the Magic provided some hope that the Bogut/Jennings/Salmons trio was ready to roll. False hope, maybe.

All three had games to forget, and Salmons was the worst, shooting 2-11 for seven points in 32 brutal minutes. Shooting being the operative word, as Salmons never got into the paint, misfiring his way around the court from all sorts of Salmonsy mid-range places: 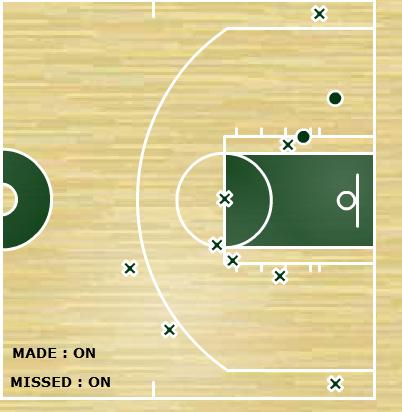