Share All sharing options for: Heat 87, Bucks 74: Hurting in Milwaukee

MILWAUKEE -- The nice thing about that loss to the 76ers was that it couldn't get much worse. Until it did. Two nights later. Before the game, during the game, all night everything went wrong faster than Dan Gadzuric biting and jumping and flying on a pump-fake.

The Philly game felt like a bump in the road at home, but now the whole ride feels awfully bumpy.

This was an important, late-March battle between teams fighting for playoff positioning. Yet it felt more like I should be hoping for a number one draft pick watching Kurt Thomas start and Royal Ivey, Dan Gadzuric, Primo Brezec, and Charlie Bell play serious minutes.

Such was the sticky situation when Andrew Bogut (back) and Ersan Ilyasova (flu) couldn't play, and Carlos Delfino (neck) was frighteningly stomped on in the first quarter. Lose three of your best, and you are going to lose. After all, this team isn't Portland, and no team can really stop Dwyane Wade (30/7/7) every time.

Delfino's injury was the story of the night, he was just lying there on the floor motionless for minute upon excruciating minute from my vantage point, and everyone in the building had the same thoughts, everyone in the BC had that same sinking feeling in their stomach.

Some "Del-fi-no" chants tried to lift him, and eventually a stretcher transported him into the locker room. The night was already lost in a way at that point.

It's not like us. It hasn't been like us this year to lose the jump ball and have a guy just dribble right down from the right side and literally shoot a reverse layup. Two guys with backs to their play, and another guy just standing and watching.

A rather rotten night. Another one. But this time it really can't get worse. Right, Sunday?

John Salmons. Without Bogut and Ilyasova, and then without Delfino, and essentially without Jennings, this was a night for John to score more than the four points he finished with against Philadelphia in the previous game. And he did, in a minute and 34 seconds, scoring the team's first five.

But this was also a night for John to score more than 40 points. Because there was just no one else. Salmons led the way with 23 points, making 9-17 from the field while no other starters made more than a couple shots. This very well could have been a historically bad offensive evening in Milwaukee without this trade deadline addition.

Luke Ridnour. He made a perfect chest pass to Dwyane Wade (while playing for the Heat), he made some mistakes, but he also made plays. Ridnour chipped in 12 points on 5-11 from the field, and those 11 attempts from the field are his most in a month.

Luc Mbah a Moute. Twelve points in the last three games, and that's an aggregate, not an average. The Principal was full of rebounds and misses tonight, unable to put back the put-backs. Eight offensive rebounds is just terrific, 2-11 from the field, not so much. Mbah a Moute entered the night shooting 64.2 % at the rim, but this won't help. Looks like 1-10 from what the ESPN box score terms "0 feet" from the hoop. 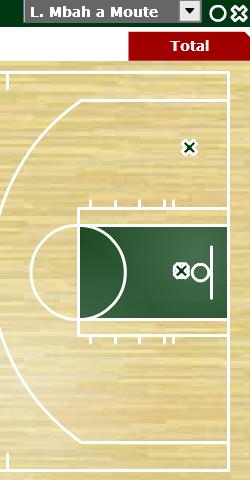 2. Kurt Thomas, along with Brandon Jennings and Luc Mbah a Moute, led the team with two assists. The Bucks had four assists at halftime, nine assists in 48 minutes.

15.0 % Three point shooting, or the lack thereof, harmed Milwaukee for the second disappointing home loss in a row. A couple nights after shooting 5-28 (.179) against Philadelphia, they managed an even worse 3-20 (.150) night from beyond the arc.

0. Zero blocked shots for the Bucks, which doesn't really happen when someone is in the lineup. Link-tip to TheJay for this list of previous games in which the team didn't block a single shot.

The real Bucks. A big win isn't followed with reasoning that suggests good health is responsible for the good result, so to blame this bad loss on injuries doesn't fly, completely.

Not completley, but perhaps mostly. The Bucks are still 13-1 when they run a Jennings/Salmons/Delfino/Mbah a Moute/Bogut starting five, and each of them individually raise questions at this juncture, but together they have been rather spectacular. That is the unit that will take to the court and start in the playoffs in Boston or Atlanta and hopefully not Cleveland or Orlando.

Two more. Presumably, the Bucks are still a passable home team, and they have a couple more chances to prove that before hitting the road, with games on Sunday against the Grizzlies and Tuesday against the Clippers at the BC.

BROGUT. It's been a minute (a full week, actually) of Brandon Jennings and Andrew Bogut producing absolutely nothing profound, and these two have carried the team by themselves, together, and with others throughout most of the season, and it's obviously on them to put this mess back together.

Maybe it wasn't Emo Bogut after all, maybe it was the injury or two. But if that is the case, and this is about injuries, the whole thing is even more frustrating than if he was just not playing well for a few games.

Like every night, Milwaukee needed their man in the middle desperately. The Heat and Bucks started the night second-to-last and last respectively (but not respectably) in the NBA in scoring at the rim. And while the points in the paint were pretty even (Miami 34, Milwaukee 32), the Heat converted on 17/22 shots in the painted area compared to 16/47 for the Bucks, and that type of discrepancy borders on lunacy. The Bucks couldn't rent or lease a bucket, much less buy one. With Bogut, the Bucks make a few more, the Heat make a few fewer.

And Brandon? You had 35/8/5 against the Warriors. And in the four games combined since then you have totaled 27/9/6.

Standings. The Bobcats won again, the Heat quite clearly won, and so the Bucks lead Miami by a game, and more importantly, only lead seventh-place Charlotte by 1.5 games. Milwaukee wants nothing to do with the seven seed, as that would result in a first-round date in Orlando.

Adding insult to injury. To injury. To insult. And so on. Bogut (back) and Ilyasova (flu) didn't suit up for this one, and Jermaine L. O'Neal was bitten by the injury bug in the first quarter after hyperextending his right knee. And in one of the bleakest moments of the year at the Bradley Center, Udonis Haslem's foot inadvertently came down fast and hard on Carlos Delfino's head/neck in the second quarter. The team reported that Carlos had full movement in all extremities, and we hope for only the best.