Share All sharing options for: Bucks' win caps off night of celebration

On a night full of highlights, Jennings' around-the-back dish may have been the best

In the grand scheme of the universe, everything about game three just felt right.  Don't get me wrong, I fully expect the Hawks to bounce back with a much better effort on Monday, and actually winning the series will still require a rather Herculean effort on the Bucks' part (and a win on the road, too).   But the Bucks' players, coaches, staff, and fans deserved at least one more night where all the good things about the 09/10 season could be celebrated--Bogut's injury and the first two games in Atlanta be damned.  And fortunately, the Bucks delivered exactly that. Yes, the 107-89 victory represented a much-needed first playoff win, but it was also a well-deserved celebration of what this season's Bucks have been all about.

For me that was as much a relief as anything else.  I flew into town Saturday morning for the specific purpose of watching games three and four in person, so yeah, you could say I was a little more amped up for a win than the average person.  After the jump check out some additional thoughts and observations from the Bucks' first home playoff game in four years.

Jennings' swagger.  By now you've probably seen Brandon's shimmy in the fourth quarter, but even more important was the way he rose to the occasion in the first.  His three triples to open the game got the crowd into it early, showing once again his incredible sense of the moment, and he was into it as well: pounding his chest to the crowd, flashing his three-point monocle.  He loved it, we loved it...the playoffs were back in Milwaukee.

Cruising. There wasn't anything too surprising about the Bucks winning, or even the way they fed off the crowd's energy to jump all over the Hawks early on.  Up 2-0, this was the game where you'd expect the Hawks to get complacent, and there's no denying how much better both of these teams are at home than on the road.  But I will say that I expected the Hawks to put up a better fight in the final three quarters, much as the Bucks chipped away and fought back in game one.  Things seemed to be swinging that direction at the end of the second quarter, beginning when Marvin Williams' late pull-up three got them to within 12 at the break.  Things continued to go that way in the third when Johnson hit a three and then made a pair of free throws to cut the Bucks' lead to single digits.

For a moment it seemed like the Bucks would be in for a fight, but it ended up being a false alarm.  Jennings found the much-maligned Carlos Delfino wide open for a right corner three on the next possession, pushing the lead back to 12 on the Argentine's first three of the series.  After Thomas forced a Horford miss, Mbah a Moute then drew a foul and made both free throws, and Jennings then found Mbah a Moute streaking down the middle for an acrobatic transition lay-in to get the lead to 16. Moments later, Jennings passed through perimeter pressure to find Mbah a Moute at the free throw line, and the Prince located Delfino in the same spot on the right side for another three.

Containing Josh. The toughest Hawk to cover drew the Bucks' best defender (Mbah a Moute) early, and it's hard to argue with the strategy on a night when Mbah a Moute somehow outscored Smith. While Salmons was perfectly respectable hanging with Johnson, Mbah a Moute's length and quickness predictably bothered Smith more than Delfino had in the first two games.

Aside from the defense, Smith also just appeared a step slow, and in the second half flat out didn't look like he wanted to be on the court anymore.  He got up slowly on two or three occasions following hard fouls and scrums on the court, though it's tough tell whether his main problem was mentally or physically.  And naturally, the crowd--which booed Smith at every turn--absolutely loved it.  While Smith is unlikely to play this poorly on Monday, give the Bucks credit: they made adjustments and the Hawks didn't do anything to counter them.

Horford vs. KT.  Hard to believe Kurt Thomas' numbers (26 min, 4/4 fg, 8 pts, 13 rebs) dwarfed those of Al Horford (31 min, 5/9 fg, 10 pts, 3 rebs), especially given the way Horford single-handedly kept the Hawks afloat with eight straight points (including three jumpers) midway through the third.  But Horford really didn't do anything with the exception of that two minute stretch in the third, and Thomas finally had his jumper locked in after a couple weeks of struggles.  It's also tough for Horford to rebound when the Bucks aren't missing shots, isn't it?

Hammond honored pregame.  John Hammond accepted the executive of the year award from Bob Lanier before tipoff--getting a well-deserved standing ovation.  Unfortunately, they apparently misspelled his name "Hammand" on the actual award (I think it was Channel 4 which had a close-up last night).  People constantly refer to him as "Hammonds," but Hammand?  Has anyone ever spelled it that way?  C'mon, NBA. 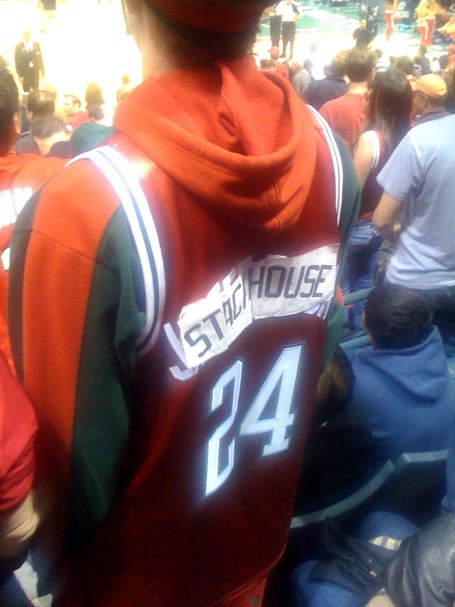 Red alert.  Plenty of teams go for the "white out" approach in the playoffs, so I give the Bucks some credit for going unconventional with the decision to go red in game one.  But if the Bucks are going with a team color, how about green?  From a selfish standpoint, all of my Bucks gear is either green or brown (I have a brown retro logo shirt), and at least with green you don't have to worry about the Hawks showing up wearing the same color as the rally rags.  I guess red is more visually impactful, but whatever...I don't want to buy another shirt, people.

Giving Bogut his due.  The big man was no longer sporting the huge robo-arm-brace thing he had in Atlanta, though he was still wearing that big cast on his lower arm and hand, limiting him to lefty high fives during timeouts. You know it's killing him that he can't play, but that doesn't mean he couldn't enjoy his teammates' win. Bogut was bopping and grooving on the bench in the final minutes as Squad Six got their "Ole" chant going (below, may take a minute to load), and they capped it off with an "AN-DREW BO-GUT!" chant in the final minute.  Squad 6: still dominating.

Seniorgee crushes it.  Seniorgee's dance routine in the second half was easily the entertainment highlight of the evening for me, though I also enjoyed the video the Bucks put together of Bango going after Hawks fans in the streets of Milwaukee.  My only complaint: the Hawks fans were always wearing Al Horford jerseys, when it clearly would have been more villainous to cast them in Josh Smith jerseys.