Bucks/Hawks, v4.0: Milwaukee having too much fun to quit now

Share All sharing options for: Bucks/Hawks, v4.0: Milwaukee having too much fun to quit now

If game three was a well-deserved celebration, then consider game four the party of the year.  The BC seemed to be rocking even more than on Saturday, especially with the Hawks deciding to put up a bit of a fight and offer some drama in the fourth quarter.  Fortunately the Bucks' players and fans were up for the challenge, putting an exclamation point on another fantastic night in Milwaukee with a 111-104 win to tie the series 2-2--and guarantee there will be at least one more game in Milwaukee this year.  Alex will have our regular recap shortly, but in the mean time I thought I'd throw together some quick thoughts from my second amazing night at the BC in three days.

Offense: better and best.  Both teams put up crazy scoring efficiencies tonight: 128 pts/100 for the Bucks and 120 for the Hawks.  You'd normally never expect to win a game surrendering that kind of scoring to Atlanta--in fact that's a higher efficiency than they had in either of their wins (118 and 110)--but somehow the Bucks managed to do them one better whenever Atlanta was poised to make a run.  According to my game logs, the Bucks had only eight games in the entire regular season where they allowed 120+ pts/100 possessions, and they won only one of those contests--the Golden State game where Jennings scored 55.  It's also the highest single-game efficiency of any game this season and the third-best eFG% (60.1%) they put up.

Both teams were punishing each other for any daylight they surrendered, but the difference was probably that the Hawks ended up taking much tougher shots.  The Bucks did a much better job driving and passing through the Hawks defense for easy buckets, outscoring ATL 44-26 in the paint.  From three point range the Bucks were good but hardly great, as Delfino was on fire (6/8) and everyone else was cold (1/10).  Meanwhile, the Bucks were insistent on cutting off Atlanta's dribble penetration with help defenders, and early on they made the mistake of doubling on posts too often as well, leaving Bibby and Crawford open time and again.  To top it off, Johnson was making all kinds of leaners and fadeaways, while Josh Smith banked in a long two and even made his first three of the season.  Just one of those nights.  But I also couldn't help but wonder whether the Hawks' sharpshooting had them often too content to take long jumpers rather than work the ball inside more.

Mouse in the house.  I thought Jennings' 23 tonight were probably even more impressive than the 34 he dropped in game one.  Aside from a tough step-back he drilled in the second quarter, his other eight field goals were all layups or floaters going to his left, as he time and again beat Bibby or whichever big man they tried to switch on him to the hoop (see below).  I always complain about Brandon's ability to get quality shots and finish around the hoop, but he was simply fantastic in that regard tonight.  Especially in the third, he also kept the Hawks off-balance by getting to the lane and passing the ball off to open teammates, notably Mbah a Moute.  He delivered a pair of huge floaters from the left side of the lane in the final five minutes to help seal it, and added some late free throws to ice it.

Attacking Zaza.  The Hawks' switching defense makes sense when you're working with mobile, athletic bigs like Horford and Smith, but not so much with a slower guy like Zaza.  And give Skiles a ton of credit, because whenever Pachulia's on the court they seem locked into running P&R against him to create a mismatch.  Salmons and Jennings both exposed Zaza's lack of footspeed on numerous occasions, while Delfino's dunk on him provided the night's most obvious highlight.

Delfino arrives, finally.  In the pregame, I humbly requested 15-18 points and 7-10 rebounds from Milwaukee's favorite Argentine and he came through with 22 and 4.  Good enough.  He drilled a pair of first quarter threes to help the Bucks recover from an early six point deficit, then delivered the facial on Zaza (above) to send the building into hysteria shortly thereafter.  And two days after delivering a pair of dagger threes from the right corner (his only field goals as a matter of fact), the Hawks' miscommunication somehow left him all alone to rip another dagger from the left corner that made it 97-88 with 3:56 remaining.

KT/Gadz continue to impress.  The Hawks got Al Horford a couple post looks in the second quarter, but for the most part he was invisible for a second straight night.  Foul trouble definitely was part of it tonight, but the Bucks have also been doing a very nice job hedging on P&R to prevent good looks on pick/pop plays.  Have to expect a bounce back game from him in Atlanta, right?

Meanwhile, Gadz has been dialing it back to 2004 the past two games, showing that he can still harness his energy and athleticism for the powers of good.  His shining moment came at the end of the third when he flew in at the last second to swat Joe Johnson's shot with about 11 seconds left, then bobbled and recovered a nice pass from Ridnour to finish past Josh Smith with less than a second left in the period.  A number of "Danny G" chants tonight, all well deserved.

Gadzuric gave way for Thomas down the stretch, and the veteran frustrated the Hawks with his hard picks, drawing a pair of frustration fouls from Crawford and Bibby, each of whom looked like they wanted to pummel KT with a manhole cover.  My favorite moment of the game was probably when Bibby launched himself at Thomas and then got an evil, evil smile from Thomas as he walked to the foul line.  God I love having Kurt Thomas on our side.

Family affair.  I saw Brandon Jennings' brother Terrence walking around before tipoff--rocking a white headband and white Jennings #3 shirt, natch.  He was one section over from us with his mom, and late in the game I saw that he had a ROY sign for Brandon.  The "We love you!" is especially awesome.  Kinda tough to see him, but I snapped a pic below.  For more on Terrence, check out Jim Paschke's interview with Brandon's bro last summer.  You can see why people only have great things to say about Brandon and his family. 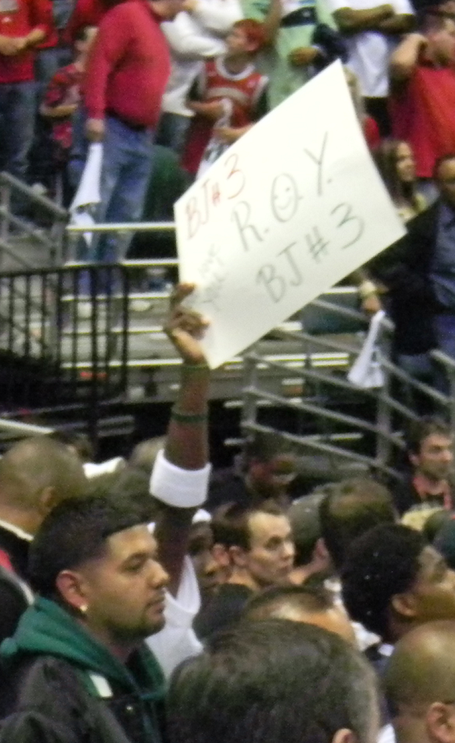 Bango bringin' it.  Seems like there's only so much you can do with a trampoline at this point, so Bango set the bar even higher with a rather insane backflip off a 16-foot ladder.  Too bad we didn't have those mats down when Bogut did his flip.  Yeesh.

The scorers' table tells no lies.  Not sure whether they were rotating other ads in during the game, but in the final minutes I couldn't help but notice the same words stuck on the scorers' table: 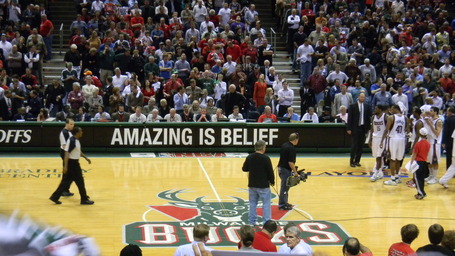 Ice water.  I remembered to bring my semi-decent camera tonight and snapped a few pics late in the game, including this one of Jennings icing the game in the final seconds. 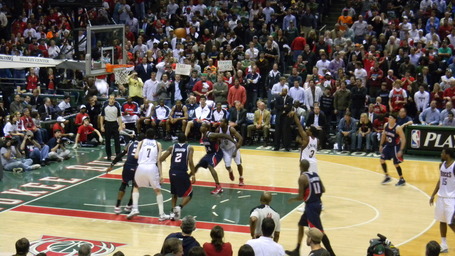