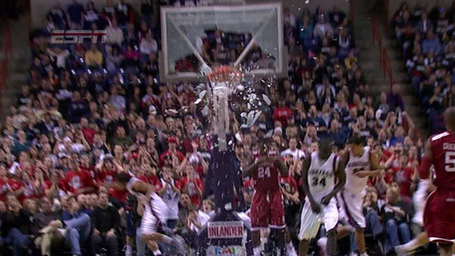 Okay, I'm a big Oklahoma Sooners fan, and thus I've watched Tiny Gallon play quite a bit in his brief time at OU. As you probably know, I'm not the biggest fan of Tiny personally, but I have to say that he wore the crimson and cream so I certainly hope that he has a productive career (especially now that he is with the Bucks). I think he'll have trouble adjusting to the NBA, but I hope to be proved wrong.

With all that out of the way, let's take a look at Tiny Gallon. I had the feeling from the moment that he arrived at OU that he was looking to be a one-and-done. He talked about that possibility frequently whenever he was interviewed. Then, it came out in March that Tiny accepted $3,000 from an agent back in August 2009 - in violation of NCAA rules.

Beyond that, Tiny was in coach Jeff Capel's doghouse a few times, in case you're wondering why he only started 21 games. He was benched a few times during the tumultuous season. The Sooners lacked the chemistry that is necessary to win in basketball, and a lot of it was because of individualistic play from guys like Tiny, and Tommy Mason-Griffin who also declared for the draft after his freshman season. OU lost games they were heavily favored in - to Houston, San Diego, Nebraska, and Colorado. They lost to 31 against Baylor, a team they had never lost to before. They lost their last 9 games consecutively, and 12 of their last 14. Basically the guys gave up on the team, and I think that Tiny was no exception.

I will admit that Tiny is a good rebounder, and has the skills to do that at the NBA level, even though he is a bit undersized at 6'9". Scott Nadler at DraftExpress sums it up nicely:

One aspect that really stood out about Gallon’s game was his prowess as a rebounder. He averaged 13 rebounds per 40 minutes, pace adjusted, which was good for 15th in our entire database. He has great hands and is aggressive when pursuing the ball, often rebounding the ball in traffic -- as evidenced by his 4.5 offensive rebounds per 40 minutes. These are impressive numbers, especially considering that he got them in the tough Big 12 conference.

Sometimes it was amazing the rate at which Tiny would get rebounds. He really had a talent for it, and that was definitely his best asset as a player.

He does have some offensive skills too. Tiny has a pretty smooth jump shot, but he may just be a bit too in love with it. Tiny shot a little better than 57% from inside the arc. He scored 16.9 pp/40 pace adjusted. He has a variety of low post moves, and he even crossed someone out of their shoes once.

Tiny is a bit too in love with his ball skills and his jump shot. He has the type of game you'd associate with Antoine Walker (but nowhere near that good) and the body of Anthony Mason. It was incredibly frustrating to watch a guy with that kind of size shoot three pointers, and settle for jump shots, but that's exactly what happened.

With respect to his ball skills, DraftExpress explains why this was a problem:

Gallon’s propensity to turn the ball over is a bit discouraging. His assist-to-turnover ratio of .34 was 20th worst in our database . His tendency to drive into traffic and force tough passes caused him to turn the ball over on 24% of his possessions last season. Clearly Gallon is still trying to figure out his limitations as a basketball player.

His turnovers were something that I noticed a lot at Oklahoma. It could kill momentum, and obviously it ruined offensive chances. For some of his offensive ability, Tiny would negate that by making a stupid turnover, often times because he thought he could show his handles and get by a guy. And the worst part was that often times Tiny would not hustle back down the court after a turnover. Coming into college, we all knew Tiny would have conditioning issues because of his weight, but to his credit he really slimmed down. At times though, it would seem as though Tiny would take a few runs down the court off - and I recall quite a few occasions where I'd notice that Tiny was the only player on the other side of the court.

Tiny was also not great defensively. He struggled sometimes a little against taller guys, and guys with developed post moves and a high basketball IQ (something that will not be lacking in the NBA). He really needs to work on post positioning, both on offense and defense. He doesn't have good lateral quickness and is susceptible on a variety of designed give-and-go type plays. The examples of him deciding against running down the court illustrate his lack of focus and hunger on the defensive end.

Something has to give. Skiles will not allow that kind of attitude on the team. Tiny is going to have to get in line, or he'll be sent packing. I'm really hoping that Tiny realizes that he has a golden opportunity now, and something just clicks. With the right work ethic, training program, and teammates, I think that Tiny could develop into a solid player. He needs to realize that he's not a small forward and he should be playing near the basket rather than shooting up perimeter jumpers. I hope that Tiny has a great career and becomes a contributor. My major issue with this pick for the Bucks is that I didn't see much in his time in Oklahoma to indicate that he has the willpower to turn it around.

I'll be rooting for Tiny, don't get me wrong. But I'd rather have his teammate Willie Warren in the Bucks uniform, and merely follow Tiny from afar.