Caponomics, Pt II: How much is Luke Ridnour really worth?

Share All sharing options for: Caponomics, Pt II: How much is Luke Ridnour really worth?

With six members of the 09/10 Bucks becoming unrestricted free agents, we all know John Hammond has a busy summer of reloading and refining ahead of him. And while there's little question that his first job is figuring out how to retain (or replace) John Salmons, we've heard almost no discussion about Luke Ridnour so far.

A year ago we probably wouldn't have predicted re-signing Ridnour to be such a priority. In his first year as a Buck, Ridnour had put together another solid-but-unspectacular year, battling through a series of nagging injuries before a broken finger opened the door for Ramon Sessions to deservedly take over the starting PG duties. Many (myself included) were then disappointed when it was Sessions rather than Ridnour who departed last summer, but Jennings' immediate impact quickly erased most of those concerns. And despite outplaying the rookie in the preseason, Ridnour (like any good veteran role player) didn't rock the boat when Jennings was named the starter for the season opener in Philly.

Instead he let his play do the talking--and it said quite a bit. Healthy for the first time in years, Ridnour didn't miss a game and obliterated his career highs in every shooting category, had the lowest turnover rate of his career, and set a new career-high in PER (17.81) to boot. A career .413/.338/.857 shooter coming into the season, Ridnour shot .478/.381/.907 and showed his worth by leading the Bucks second unit as well as frequently playing next to Jennings late in games.

Back in December we questioned how long his hot shooting could continue, and it did tail off somewhat from the 50.8% he was shooting from the field in December. The Bucks were also better with him off the court (+3.0 pts/100 possessions) than on it (-0.24), but that's probably more a reflection of Jennings' strong all around play than a condemnation of Ridnour's work.  The bottom line is that Ridnour was about everything you could have hoped for in a backup, both in terms of production and willingness to embrace a diminished role. With Jennings firmly entrenched as the starter of the present and future, there's no illusion about how the 29-year old Ridnour would fit in going forward. But that leaves one all important question: how much should the Bucks be willing to pay to keep him?

Can Ridnour's hot shooting last?
Let's start with the more basic question of what we can realistically expect from Ridnour going forward. As we first suggested in December, it would be virtually unprecedented for a guy Ridnour's age (29) to consistently become a lights-out shooter after years of mediocrity. You see one-year aberrations, but they're usually just that--aberrations. In fact, his true shooting percentage had been rather remarkable in that it was so consistently poor over his first six seasons--never worse than 48.2%, never better than 50.9%. If you're not used to looking at TS% stats, consider that the average team shot around 54% this year and the Bucks were third worst at 52%. Yet this year Ridnour's true shooting spiked to 57%, best among any Bucks rotation player, and his scoring rate jumped to 19.4 pts/40 minutes--well above his previous career-high of 14.9 and better than every Buck except Salmons and Bogut.

Much of that was due to his incredible shooting on long twos. After making between 41% and 45% of his 16-23 foot shots the past three seasons, Ridnour buried an insane 57.0% (146/258) from that range this year. Among players with more than 100 attempts, no one else in the NBA made better than 48.0%. Needless to say, that kind of shooting isn't likely to be repeated, and paying Ridnour on the basis of a career season doesn't make a whole lot of sense. Courtesy of the NBA's hot spot data, check out Ridnour's shooting by location over the past two years--notice how dramatically it changes: 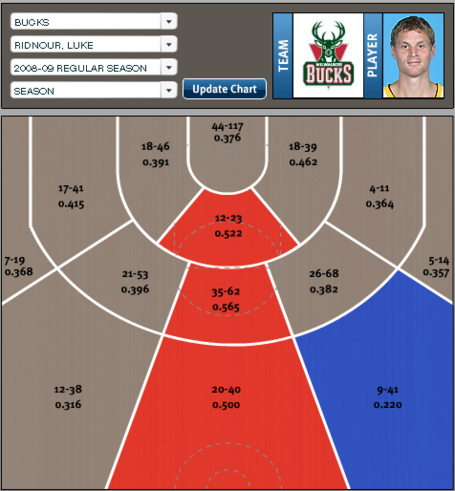 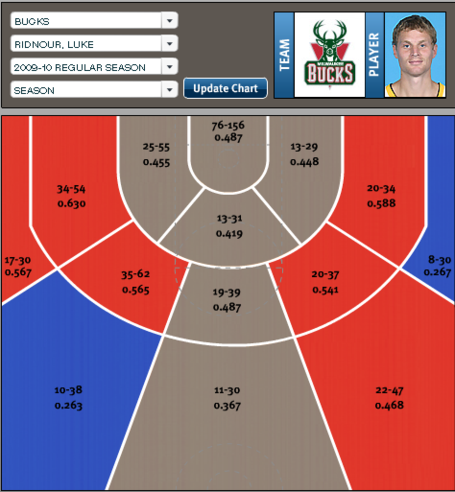 Ridnour's value: No more than $3-4 million per season for the short term
Ridnour's last deal paid him $6.5 million per season, but that was signed when the Sonics considered him an up-and-coming starter. Those days are obviously long gone. So what's market value for a good backup point guard?

The problem with that question is that the best backups are often either a) young players on rookie contracts (George Hill, Darren Collison, Ty Lawson) or b) high-scoring combo guards still getting paid by the inflated deals they got while they were starters (Jason Terry, Jamal Crawford). That leaves a more modest subset of guys who were actually signed for the purpose of being backups, including the likes of Steve Blake ($4 million), Earl Watson ($2.8 million), Keyon Dooling ($3.56 million), and our old friend Ramon Sessions ($3.67 million in 09/10). Sessions isn't a great comparable since he was signed in part for his youth and upside, and similarly both Jarret Jack and Lou Williams ($5 million) were young and viewed as at least potential starters when they signed their deals. None of those descriptions apply to Ridnour at this point, though his productivity last year was also well above that of guys like Dooling, Blake and Watson.  Still, given his age and the low likelihood of a repeat performance, I'd peg his "market" value around $3-4 million.

I'd also argue against signing Ridnour (or any other backup) for longer than two or maybe three years. Part of that has to do with his age: though Ridnour has never relied much on his athleticism, he's not going to get any better as he cracks the three decade mark. But perhaps more importantly, there's just little reason to sign role players to long-term contracts. While every team wants good bench players, those are the guys you're supposed to find off the scrap heap and through the draft. Good GMs find Luc Mbah a Moute in the second round, get Jerry Stackhouse for the minimum, and bring Ersan Ilyasova back for well below market value. They don't tie up major dollars in their bench.

Not that it isn't tempting at times. After all, how bad can a long term deal be when it's "only" $3 or $4 million per year? After all, if the mid-level exception is close to $6 million, shouldn't that be the average player's value?  Um, no. In a league where superstars rule and make three to four times the average salary, teams can't afford to pay just decent players the MLE. And that doesn't even factor in the risk of signing average players to long-term contracts.

Consider the case of Charlie Bell. A couple years ago Bell was a useful rotation guy, and he still can be useful as someone who plugs holes when other guys get hurt. But you don't pay an NBA player close to $4 million every year for five years just to be a scrappy fill-in when better players get hurt. And for most role players it's not a big leap to go from the useful rotation guy to the dude who can't get into a game. Which is a long way of saying that while Ridnour may be a key cog of the second unit now, things can change very quickly.

That's where short contracts are helpful, because not only do they allow you to avoid deadweight salary in the long term, but they also give you more trade options in the short term. Prime example: the Bucks were able to acquire Salmons simply because they had small expiring contracts that the Bulls wanted. They wouldn't have touched Bell's deal with a ten foot pole, and they probably didn't care too much whether Hakim Warrick and Joe Alexander would ever help them on the court. The important thing was that they had expiring deals. And while all role players prefer long-term certainty, it's only useful for the team if it comes at an appropriate discount.

Thinking short-term: the importance of Salmons and Ridnour
While I'd prefer the Bucks let Ridnour walk rather than give him a four year deal for $4-5 million per season, there are at least a couple legitimate reasons they might be willing to pay him slightly more than we might otherwise prefer. The most obvious is continuity and the pressure to build on this past season's success. Nostalgia and the misplaced fear of "letting talent walk" has led many franchises down the wrong path, but it's understandable for the Bucks to want to retain Salmons and Ridnour as they try to avoid a letdown next year. We know how they fit into the roster and continuity on a good team is generally a good thing.

But an easy to overlook factor is that Salmons and Ridnour can both be re-signed using Bird rights, while free agent replacements would require dipping into the Bucks' limited cap exceptions. Assuming Salmons opts out, the Bucks will have ten players (including their first rounder) under contract for $52 million next year. If the luxury tax is around $68 million, that would give them a $16 million budget to re-sign Salmons, Ridnour, and fill out the remaining 2-3 spots on the roster. Because the Bucks will be over the salary cap, they'll only have the biannual ($2.08 million) and mid-level (likely between $5.5 and $6.0 million) exceptions with which to sign non-minimum salary free agents (other than their own). However, because of Bird rights they can effectively sign Salmons and Ridnour for as much as they want without using any of their other exceptions.

For instance, if they re-signed Salmons and Ridnour for, say, $10 million combined, they would still have $6 million to spend on the final three roster spots. Two of those might be the second rounders for around $1 million combined, which would leave close to the full MLE to sign someone like Drew Gooden. They would also have the BAE, which they could use if the tax level was closer to $70 million, and every team can sign as many players for the minimum as they want.

In contrast, if Salmons and Ridnour both walk, Hammond will have some serious holes to fill in the rotation and only the draft picks and the exceptions with which to do it. In other words, from a cap perspective the money available to sign Bird free agents isn't perfectly fungible--if Hammond wants someone like Josh Childress or Ray Allen to replace Salmons, then he probably needs something close to the full MLE to do it. That in turn means no money to sign someone like Gooden. Hopefully the Bucks' first round pick can contribute immediately, but there's virtually no way someone like Paul George, Xavier Henry, or Gordon Hayward can fill Salmons' 20 ppg shoes as a rookie.

And unless they've found a reliable backup PG in the draft --and personally I'm not a huge fan of expecting a 2nd rounder to play 15-20 minutes every night--they would probably need to use the BAE (or less) on someone like Chris Duhon (a former favorite of Skiles in Chicago), Jason Williams, Watson, J.J. Barea, Anthony Carter, Carlos Arroyo, or Rafer Alston, to name a few. None of those guys are likely to arouse much excitement, but I'm not sure Ridnour will continue to be a cut above those guys in 2010 or the year after, either.

Given his banner season, Ridnour will certainly attract attention this summer, particularly from teams like the Celtics, Knicks, Heat, Lakers, Spurs and Jazz. The Bucks will obviously be hoping none of those teams take an overly optimistic view of Ridnour's future performance, but if they do make him an inflated offer then it's up to the Bucks to think about the big picture. Losing Ridnour isn't the preferred option, but overpaying him would be the bigger mistake.