Sanders turning heads, the future of Redd, building the Bucks

Share All sharing options for: Sanders turning heads, the future of Redd, building the Bucks

ESPN: Sanders' breakout game
Jeremy has a post in today's Daily Dime about Sanders' big game. Yes, it's "just" summer league, but showing off NBA skills and a non-stop motor is an undeniably positive thing--even if it's no guarantee of future stardom.

Blocked shots are supposed to be Sanders' forte, with a few rebounds on the side. The offense he displayed, which included a game tying 3-pointer with 0.7 seconds left, surprised everyone. Everyone but Sanders, apparently. His eyes lit up when I asked him about his outside shooting.

"It's just something I been working on," Sanders said with a smile. "When someone says I can't do something, I like to go and work on it. I haven't really played much five-on-five or organized ball since my last college game. I've just been working on my game."

JS: Bucks' Redd not coming back until February
We've been talking about this in the fanposts for a few days, but just wanted to re-post this if you somehow missed it.

According to sources, Redd does not want to risk coming back too early, as he possibly did last season, and does not plan to try to return to basketball until sometime next February. It's possible that Redd, 30, also is being mindful of how the Tracy McGrady situation played out last season in Houston and New York.

The uncertain future of Redd has been hanging over the Bucks all summer, so any type of certainty around Redd's rehab is a good thing. And the fact that the Bucks can collect insurance checks for 80% of his salary until he returns is a nice bonus for a team that has clearly moved on. Gone are the days when Redd's contract made him the presumed leader and franchise centerpiece, and it's that baggage which will always complicate the possibility of him returning, even if it's in a reduced role. We all should wish Michael well, but I'm not sure he has a real future in Milwaukee.

Yahoo: Ridnour signs with Wolves
As mentioned in the FanPosts, Luke Ridnour will officially not be back as Brandon Jennings' backup...and hilariously it's the Wolves of all teams who ponied up four years and $16 million just a year after they gave Ramon Sessions the same amount.  Who will the Bucks sign to replace him?  I'm going to go out on a limb and say it's not someone from the Vegas roster. 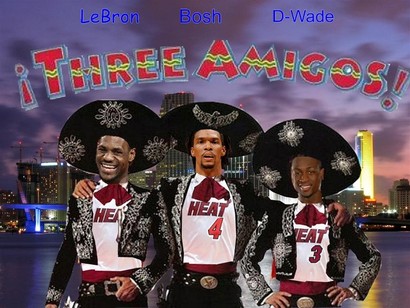 I've been looking for an excuse to use Dave's creation...

ESPN: To beat Miami Heat, build your team like 2004 Detroit Pistons
Tom Haberstroh (of Hoop Data fame) has a great read on how the old Pistons' model might be used to take down the Heat's galaxy of stars. He's also got some love for the Bucks.

The coach managed to turn the slightly built Brandon Jennings into a fine defender at the point guard position, and with the depth the team added in acquiring Drew Gooden, Chris Douglas-Roberts and Larry Sanders, Skiles has plenty of other options if Maggette doesn't respond. Add in the versatility of Luc Richard Mbah a Moute off the bench and the Bucks boast the personnel and gritty attitude to potentially become the defensive powerhouse of the future -- with enough weapons to put points on the board, too.

Hardwood Paroxysm: Free agency through the lens of WARP
I'm always looking for more rationalizations of the Bucks' summer spending...

Remember the Drew Gooden contract that people drew all sorts of insta-snark? That measures out to be the best bang for the buck deal of the summer up to this point, along with Boozer’s deal. The years may be long on Gooden but the Bucks got the veteran big man at a steep discount most likely because of his questionable motor and perception that a oft-traded player equals a flawed player. If he continues to produce on the court, Gooden could be a steal at this climate.

"Overall, I don’t know if I will big enough for the NBA, but I really want to go to the NFL as a running back," Terrence says. "Reggie Bush is my hero.

"Football is my main sport really. It just happens that I’m also very good at basketball. I play running back and free safety. I score at least three times a game and make two interceptions. And I put a guy in the hospital this year. It was on a kickoff and he came around a curve and I laid him out. It was a clean hit. I’m probably working more to get my body ready for football. That’s where strength is important."

It's kind of funny how cocky he comes off in the article, but by all accounts he's a great kid. Jim Paschke had a really great interview with him last summer while he was watching Brandon in Vegas.