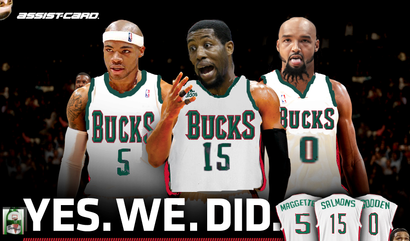 Seattle Times: Jon Brockman chat
The Times reports Brockman will earn a modest $3 million over his three year contract, chump change compared to the dollars we've gotten used to seeing this summer. Granted, Brockman's also not a major upside guy--he's a gritty, lovable role player at best. But wouldn't you rather have Brockman at the end of your bench than 'Cisco Elson?

"I'll fill whatever role they need," he said. "Energy, rebounding, defense, whatever it is. Shoot, if I'm just a practice player, I'll do it. Whatever the team needs to win."

It'll be very interesting to see how the frontcourt minutes shake out. Right now the Bucks have a half dozen rotation-worthy PFs and no one other than Andrew Bogut who's a natural center, so presumably Larry Sanders and Drew Gooden will see a fair bit of time in the middle. And let's not forget that Brockman also dabbled at the 5 for the Kings (making him the shortest center this side of Chuck Hayes). That might give the Bucks some issues against Dwight Howard, but if size becomes a major issue they will have the flexibility to trade up one of their PFs for a bigger body. But for now...meh, I'm just interested in seeing the current team on the court.

ShamSports.com: Salmons/Gooden salary details
Sham has updated their salaries with the complete Gooden/Salmons details, more or less what Gery Woelfel reported the other day. Woelfel's rounding was slightly off, but nothing material.  Gooden's deal is fully guaranteed (sigh), starting at the full mid-level salary and getting max raises in years two and three before staying flat thereafter ($6.687 million). Salmons starts at $8 million and rises to $8.5 million in 11/12 before declining over the final three years, including $7 million in the final season, of which only $1 million is guaranteed. Note that the declining value means more is guaranteed ($33.166 million total) than if it was escalating with the same buyout.

Sham doesn't have the Dooling or Brockman deals in his table yet, but I've added them in on mine with some assumptions. I'd be very surprised if Dooling got anything less than the full bi-annual exception ($4.33 million total over two years), while for Brockman I just guessed his $3 million deal was a flat million each year (just keeping it simple). If Tiny Gallon and Darington Hobson sign for the rookie minimum (the only thing they can sign for given the Bucks don't have any other exceptions to work with) then the Bucks would still be $2 million under this year's tax with 15 guys under contract.  Luxury tax averted. Well played, John Hammond.

Next summer--you know, if it happens--would find the Bucks fairly capped out but probably in decent shape. I really don't know what will happen to the cap and tax levels if/when the lockout happens, but for lack of imagination let's assume it's around where it is now. With Redd expiring and Mbah a Moute and CDR hitting restricted free agency, the Bucks would have a little more than $52 million committed to 12 players. Including the RFA cap holds, the Bucks would likely just be looking at the MLE to work with in free agency, but they'd also be well below the tax. That's a major reason why all their offseason spending probably isn't the recipe for financial calamity some might have knee-jerked their way into believing.

Bucks.com: Challenges await Ilyasova
Seemingly on cue, Truman Reed has a new story up on Bucks.com about one of Brockman's competitors for power forward burn: Ersan Ilyasova. Aside from repping Turkey at the World Championships, Ersan is trying to get bigger, which he first mentioned at the end of last season:

"I’m not going to be resting for the whole two months; maybe two weeks," he said. "Then my goal this summer is to put on more weight and get stronger for next season as well. Sometimes when I play the ‘4,’, I feel light going up against some of the guys at the ‘4’ position, so that’s why my goal this summer is to gain more weight and get stronger playing the ‘4’ position comfortably next year.

"Two summers ago, I was 245 (pounds). Now I’m 227 and it’s my goal to be back to 245. And then I’ll get a lot of time to play in the summer league this summer with the National team and I think it will really improve my skills basketball-wise for next year."

He definitely looked a bit light against bigger PFs last year, and not being an above-the-rim type also tends to exacerbate the issue.  Hard to say if the added weight will be a net positive given that a) he's not the quickest guy as is and b) adding a bunch of weight could have some effect on his shooting mechanics as well. Fortunately, he's been heavier before, so it's not uncharted territory.

JS: Letting go of Redd good for Bucks
Garry Howard sees the end of the Michael Redd era as a good thing for the Bucks. No arguments here, though I thought it was interesting that he didn't even mention the whole insurance angle. Afterall, an $18.3 million salary looks a lot better if you can get over $14 million of it back, no?