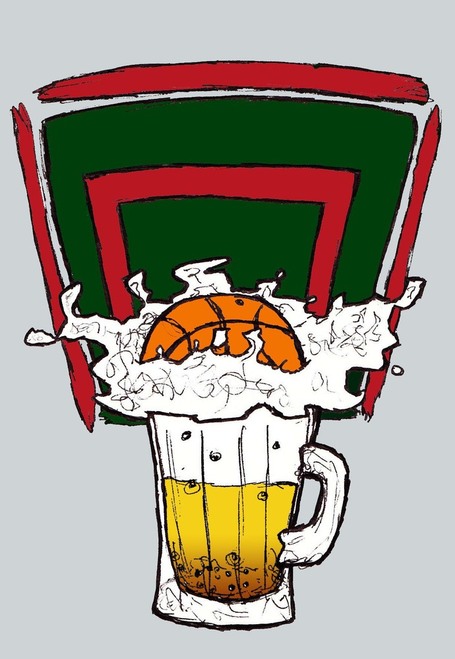 JS: Weltman's decision keeps front office intact
It hasn't been a huge topic of conversation, but don't underestimate the importance of assistant GM Jeff Weltman sticking around for a bit longer in Milwaukee rather than pursuing the Phoenix GM job. Weltman has been Hammond's right-hand man in MKE since following him here from Detroit in 2008, and it's hard to argue with the turnaround he's helped engineer along side Hammond and Scott Skiles. And while it's admittedly difficult for any of us outsiders to say how the front office dynamic might change if/when Weltman gets his own GM gig, let's just say I'm not in a hurry to find out.

Ironically, the post-Hammond Pistons are a prime example of how quickly a good front office can go south with the loss of a good wingman. Was Hammond really the straw that stirred the Joe Dumars drink? Tough to say. But we do know that a) Dumars and Hammond were the architects of Detroit's improbable 2004 title team and b) Dumars has gone off the reservation since Hammond left. I'd like to think the Bucks would be better able to cope with Weltman's departure, but who knows.

Fortunately, Weltman can afford to be a bit selective, which could explain his hesitation to go after the Phoenix job. It's not like Suns owner Robert Sarver has ever had a great rep as an owner, and with Lon Babby being brought in to head basketball operations the true autonomy of the GM job (henceforth filled by Cleveland assistant GM Lance Banks) is unclear. And from a personnel standpoint, Phoenix may need a tear-down in the next year or two anyway, which probably isn't as appealing as a team where you can start from scratch right away. Milwaukee certainly wasn't Hammond's first GM opportunity, but he waited for the right job and it's paid off so far.

One other sidenote: Weltman actually did a series of scouting reports for ESPN in 2007 (including one on Phoenix), a year after Denver let him go and right before he latched on with Hammond (whom he knew from their days with the Clippers) in Detroit. It would have been funny if Weltman called Sarver a cheapskate or something, but unfortunately it reads like an NBA guy trying to be analytical without stepping on toes. Ah well, we're still happy to have you, Jeff.

Deveney: Salmons interview
Pretty vanilla, but better than nothing.

SN: This year, in Milwaukee, you guys will have higher expectations. Is that daunting?

JS: For me, I prefer having expectations. I have usually played under the radar, and I always struggle with people not recognizing how good we are as a team. But we should be good right from the beginning. I think last year we were a surprise team, but we are not going to be a surprise team this year. I think we can finish among the top four in the East.

FanPosts: Examining What Worked, Ep. 1
DSinclair with a good look at one of the Bucks' biggest wins of 09/10. By the way, have I mentioned how much I love our readers? You guys rock.

Youtube: Brandon Jennings is not a journalist
Elie Seckbach, Israel's #1 NBA video blogger, hands over the mic to Brandon at a recent charity event.

Twitter: CDR keeps it Fresh
I need to do a full post soon about my enjoyment of all things Chris Douglas-Roberts, but for the moment just make sure you go to his Twitter feed and check out his "Memphis Memories" series of Tweets.  They're from Thursday, so you need to click "more" a few times, but funny stuff. A sample:

#Memphismemories: the whole team wearing Prada's jeans & button ups @ the Final 4 dinner when UNC,UCLA,Kansas had SUITS on. We didn't care

Courtside Analyst: Bucks "Defense Above Team"Ty takes a crack at rating the new Bucks' roster defensively. Maybe I should have saved this link for a day when I wasn't blathering about my affection for CDR...

What they appear to tell me is that the Bucks new additions, with the exception of Keyon Dooling and Jon Brockman, were not defensive standouts.  Chris Douglas-Roberts was particularly awful.

The Score: Three to watch in 2010-2011
Holly MacKenzie loves the Bucks (really, she told me a half dozen times in Vegas) and she's expecting big things from CDR in 10/11.