How Brandon Jennings can become the scorer the Bucks desperately need

Share All sharing options for: How Brandon Jennings can become the scorer the Bucks desperately need

How does that saying go? A journey of a thousand miles begins with a single step? Something like that.

In an ESPN chat a week ago, Brandon Jennings proclaimed he would shoot 40% from the field this season, which depending on how you feel about Jennings is either an acknowledgement of his need to improve his efficiency (refreshing?) or evidence of just how low his shooting standards still are (sad trombone).

While Jennings did not make the major strides most had hoped for last season, it's worth noting that he did increase his field goal percentage, finishing at the rim, true shooting percentage and free throw rate...slightly. And all that came while taking fewer shots per minute (really) and turning it over at an even lower rate than previously--an area where he was already surprisingly good. Unfortunately, Jennings also went from above average to clearly below average on threes (37.4% to 32.3%), and the reality is that he was so inefficient as a rookie that his marginal improvements elsewhere still left him well below average by most every scoring efficiency metric. That's especially problematic since, as Rob Mahoney points out, Jennings to date hasn't shown the consistent playmaking needed to compensate for his scoring inefficiency. While John Wall (49.4% TS) and Rajon Rondo (49.5%) were similarly ineffective at putting points on the board, their playmaking (and Rondo's defense) makes up for a lot. With Jennings that hasn't been the case, though that's probably worth beating to death some other time.

But putting that aside, what would it take for Jennings to get closer to the league average of 53-54% true shooting? As we argue out after the jump, it won't be easy...but it's still very possible. 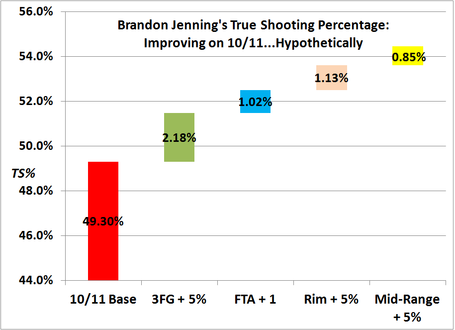 Three is the magic number. To understand how Jennings can get better, it makes sense to start with his three point shot for two major reasons: a) almost a third of his shots have come from behind the arc in his first two seasons, and b) it's the one type of shot he's actually shown himself to be proficient at making in the NBA. Note that I'll focus on TS% because it also factors in three pointers and free throws, making it a much more comprehensive efficiency stat than raw FG%.

Had he maintained his rookie three point clip, Jennings' TS% last year would have jumped from 49.3% to 51.4%, while his overall FG% would have jumped to 40.6%. Hardly knockout numbers, but a big improvement nonetheless. And just as importantly, we know he can hit threes because he's actually done it over an 82-game sample--hoping Jennings can make 37% of his threes isn't like expecting him to suddenly become a lights-out finisher or a Ridnour-esque mid-range shooter.

More throws, please. Jennings also drew more fouls last year, but that's another area in which he could stand to improve. He ranked 18th out of 28 in free throw rate (0.27 fta/fga) among PGs averaging 30+ mpg, and it's no secret that getting to the line regularly can dramatically increase scoring efficiency. Chauncey Billups is a great example of this currently, while Jennings' idol Allen Iverson scraped by in efficiency terms almost exclusively because of his propensity to draw fouls. In keeping with hypotheticals, drawing one more free throw attempt per game (from 3.9 to 4.9 fta/g) on top of the previously mentioned three point improvement would further bump up his true shooting up another point to 52.5%. Those aren't good enough numbers for a first scoring option, but at least they're in the ballpark of average.

Added strength a plus in the paint? Jennings' most obvious area of improvement last season came around the hoop, where he significantly improved his league-worst 42.7% efficiency as a rookie to a more respectable 51.4%. The problem is that he was still well below average among point guards who played more than 30 mpg, narrowly edging out Luke Ridnour for the bottom spot. To be fair, Jennings also creates more shots at the rim than most, which is valuable in itself because it's a fundamentally easier shot to make--not to mention the frequency with which Jennings' missed shots around the hoop lead to putbacks by Andrew Bogut and others. Still, even metrics that adjust for the value of taking better shots put Jennings near the bottom among NBA point guards in terms of finishing.

So yes, there's still much room for improvement, and adding around 10 pounds of muscle over the summer should presumably help him better finish through contact around the hoop--assuming it doesn't slow him down too much. All told, bumping up to 55-60% might be a shade on the optimistic side but it's not crazy, especially considering that a) the vast majority of 30+ minute PGs shot at least 56% last season and b) you don't have to be Derrick Rose (60.0%) or Russell Westbrook (60.4%) to be an effective finisher. While Rose and Westbrook stood out for the huge volume of shots they created around the rim, it was actually Beno Udrih (73.6%) and Steve Nash (72.8%) who led all PGs in at-the-rim FG%. For our hypothetical, let's presume Jennings improved his finishing to 56%, again keeping his attempt numbers the same. The net impact would be upping Jennings' FG% to 41.9% and his TS% another point to 53.6%--right around league average. Not bad, right?

Mid-range a must? Shot selection is obviously a big part of efficiency, and it goes without saying that cutting down on difficult mid-rangers and long twos would help most any player up their efficiency. However, Jennings isn't quite as horrible in this department as you might think. Sure, he often over-dribbles and is prone to forcing shots at times, but he actually cut his long two attempts by over 20% as a sophomore, from 3.6 per game as a rookie to 2.8 last year, all while playing two more minutes per game. His accuracy leaves something to be desired (35% last year vs. 34% as a rookie), but overall he's not as indiscriminate as you might guess. Among PGs who played 30+ mpg last year he was actually below average in terms of attempting long twos.

The Bucks would no doubt love to see Jennings make closer to 40% of his shots from 16-23 feet, and by all accounts that area has been a point of emphasis over the summer. Which is important, because the reality is that point guards have to shoot some long twos, if only to keep defenses honest and bail their teams out late in the shot clock. Unlike Andrew Bogut, you can't simply tell Jennings to never shoot long twos, but the good news is that he at least seems to realize the need for improvement. Moreover, Jennings also bumped his efficiency in the 10-15 foot range from 29.9% to 37.6% last season, though he takes relatively few shots in that range (1.3 fga last year and 1.5 as a rookie). For argument's sake, let's assume Jennings improved to 40% on 16-23 foot jumpers and his 10-15 accuracy stayed flat. Because he takes relatively few shots from this area the overall impact on his numbers is more modest than the others we've discussed, but it's still another 0.85% in true shooting terms and combined with the other improvements we've outlined it gets you to 54.5% true shooting and 42.9% from the field. Are there any realistic Bucks fans out there who wouldn't be thrilled with that kind of improvement?

All told, the hypothetical improvements above represent a credible way for Jennings to make a significant leap in efficiency terms. Getting back to his rookie accuracy from deep, adding one free throw attempt per game, making 40% on long twos, and improving to a 56% finisher at the rim would make Jennings far more valuable as a scoring option, bumping his TS% to slightly above league average and his overall FG% to 42.9%. Moreover, assuming everything else equal, that efficiency improvement would also represent a 2.2 point per game boost in scoring, which last year would have meant an increase from 16.2 to 18.4 ppg. That's huge when you consider we're assuming a minimal increase in usage (from adding a free throw attempt). That alone won't make Jennings a superstar, but it would likely make him a top seven-to-ten player at a premium position in a league suddenly full of young point guard talent.

It's not to say any of this will be easy, as there's no guarantee that Jennings will improve in any individual category, much less all of them. Thankfully, accomplishing just two of these improvements would go a long way to making Jennings a much better player, so it's not an all-or-nothing situation. Andrew Bogut returning from an offseason of recuperation with a semi-capable offensive game would making things much easier, though Jennings' own maturation will likely be the single biggest factor going in his favor. And considering how much the Bucks have riding on Jennings, it might represent Milwaukee's only reasonable chance of breaking into the upper crust of the Eastern Conference.