This is a guest post by Indiana Pacers writer and the creator of Hickory High, Ian Levy, who was nice enough to sit down and talk with me about a variety of Bucks and Pacers topics in the most recent podcast. Building off one of his articles -- Hickory High: Creating Shots In The Clutch -- he cooked up a chart and made a nice write-up for Milwaukee Bucks players that breaks down and analyzes (a) how efficient they are in the clutch and (b) the way each player's opportunities arise (assisted looks vs. isolation efforts). I have included the original podcast to pair with Ian's post beyond the jump. Enjoy, and be sure to thank Ian in the comments.

The Clutch Creation Gauge was an idea planted by an excellent piece from Corey Schmidt at Basketball-Prospectus, and nurtured by my irrational frustration with the term "creating shots."

Creating a shot takes nothing more than possession of the basketball and the inclination to throw it in the general direction of the hoop. Without qualifiers like good, open, easy or efficient, any discussion of creating shots strikes me as completely meaningless.

Schmidt's piece was a college basketball charting of which players take clutch shots for their teams and how efficient they are at that task. My extension was to use Ast'd% to measure the percentage of those shots that each player created for themselves. All the clutch stats come from 82games.com and use their definition of a clutch situation - five minutes or less in the game or overtime, neither team ahead by more than five points.

The graph below shows TS% on the y-axis, with the league average of 54.3% from last season as the mid-point. Ast'd%, or the percentage of a player's made baskets that were assisted on, is shown on the x-axis. This creates an easy four-category breakdown to place each player's clutch scoring in:

This first graph shows the Bucks from last season. 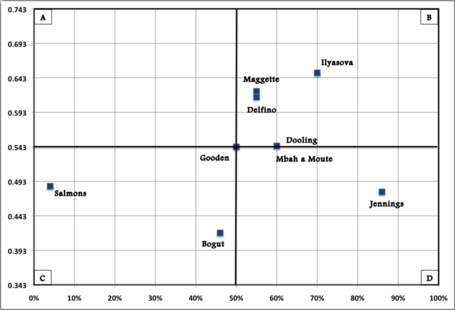 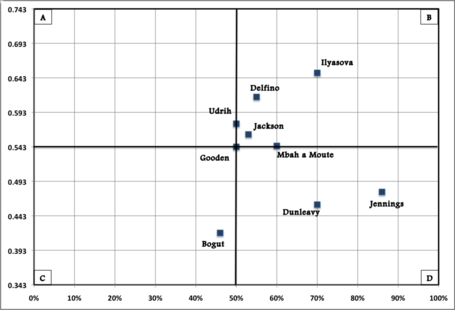 In terms of efficient clutch scorers, the Bucks look to be better off than last season having switched out Keyon Dooling and John Salmons for Stephen Jackson and Beno Udrih. I would also expect that Mike Dunleavy's performance should look a little better this season.

The most curious item for me on this whole chart was the placement of Brandon Jennings. I was not surprised to find his clutch TS% below average, but I was surprised that 86% of his made baskets in clutch situations were assisted on. There are two ways to read into that information. Since we're looking at baskets that are assisted on, we're only counting baskets that are made and assuming that the percentage of potential assists for his missed baskets would be roughly the same. It's possible that Jennings is simply only making the shots that are assisted on, and missing nearly everything he creates himself. It's also possible that the Bucks were putting the ball in Keyon Dooling's hands down the stretch and having Jennings work more off the ball. Since I didn't watch the Bucks enough this past season to know which is closer to reality, I'll allow you to reach your own conclusions.

The other placement of note was Andrew Bogut. The fact that just 46% of his made baskets in clutch situations are assisted on means the coaching staff and his teammates are doing him, and themselves, a great disservice. His poor free throw shooting will always hamper his effectiveness in these situations, but Bogut is not a player who should be reasonably counted on to get a bucket on his own. If the team was able to run an offense where 60-75% of his made baskets were assisted on, I guarantee his TS% would be much more reasonable.

Some Bucks' fans may find it disconcerting that there is not likely to be a player on the roster this season whose clutch performance will place them in Quadrant A. I'm of the Henry Abbott school of thought, that having a tremendous individual scorer is not necessarily the backbone of an efficient offense in close games. In an ideal world, the forceful creativity of a player like Steve Nash or Chris Paul, or a well-honed offensive system, can stand in for individual scoring brilliance. I'm not sure the Bucks have that forceful creativity, or meticulous offensive execution, but those elements strike me as a more worthy and thoughtful goal than pursuing some conscienceless gunner.