Have you ever reached the point in a sputtering argument where you and your counterpart finally realize the discussion is being undermined up by a fundamental difference in how you each define basic, essential terms? Of course you have. We all have. Brandon Jennings, Andrew Bogut, Stephen Jackson, Beno Udrih, Drew Gooden, Carlos Delfino, Mike Dunleavy and Luc Mbah a Moute are the players the Bucks will be leaning on the most this season, but deciding on the value of their respective levels of performance will be a challenge for all of us.

This type of problem emerges all the time when trying to discuss the success or failure of individual players in team sports, so this is my attempt to create a format (with input for readers) that can serve as a basis for our own objective evaluations of Bucks players throughout the season. However, before I describe the project and the ways in which I will need your help, let's take a moment to identify the stated problem as it often appears in sports arguments:

Person A: I think Brandon Jennings had a good first season, but I was disappointed with his performance in his sophomore campaign and felt he played poorly.

Person B: I disagree. Relative to the standards he set in his rookie season, Jennings actually played better in his second year.

Person A: In his rookie year, Young Buck was a big part of a team that won forty-six games and went to playoffs, so I think it's pretty hard to argue he was better during last season's clunker.

Person B: Hold on a second, because now you are shifting the argument. Are we talking about team success or individual execution? I'm not saying the Bucks were better in 2010-11, I'm simply saying Jennings made more positive contributions with his play during his sophomore season. In fact, he was better as a second-year player by nearly every statistical measure.

Person C: Why are you using his past performance as the measuring stick? He doesn't get to play against himself, so measure him against his peers. He wasn't good either year. The Bucks won in spite of him during his rookie season, and lost at least partially because of him in his sophomore season.

Ultimately, this hypothetical conversation doesn't really get anything accomplished because the people involved are working with different definitions and premises when attempting to define success and failure. There is no doubt that winning is penultimate in professional sports, but individual performances are meaningful because they impact and influence the goal of producing team wins. When attempting to make objective evaluations of players, team success and failure can often obscure the quality of play of each individual.

In the most basic sense, successful teams are built on successful seasons from individual players, with the inverse being true for unsuccessful teams. Looking back on the 2009-10 Bucks, it's easy allow ourselves to let the warm glow of team victory wash clean the failures of certain players on the roster. In fact, the most prominent and enduring narrative from that surprise Bucks season is that they played consummate team basketball and became some type of specialized organic unit that was greater than the sum of its parts. I'm not a huge fan of romanticism in sports, so I'd rather remember that the team success was more precisely build on very strong individual seasons by a group of important players.

In 2009-10: (1) Andrew Bogut emerged as a top-5 defensive player, maintained his stellar rebounding numbers, and served as a consistent offensive threat in the post, (2) Luke Ridnour turned in a career year approaching the elite 40/50/90 marks for FG/3PT/FT, respectively, (3) over the final 30 games -- in which the Bucks went a spectacular 22-8 -- John Salmons produced at a level that outstripped all expectations and exceeded his career bests in nearly every category, and (4) Ersan Ilyasova offered the most productive season of his NBA career. These are the players and the individual successes that truly produced the most salient competitive advantages in those forty-six wins. None of this can change the fact that during the same season Brandon was one of the least efficient PGs in the entire NBA (and a worse player than what he showed during his sophomore season), and role players like Kurt Thomas and Charlie Bell had the worst seasons of their NBA careers.

The facts contained in the last sentence are much easier to forget when the team is winning, but that doesn't mean they should be forgotten. Understanding, retaining, and dissecting more precise reasons why a team succeeded or failed makes us all better fans and game analysts. I'm not suggesting that fans operate under a simple dichotomy of winning means everyone was good and losing means everyone was bad; people almost always generate more sophisticated reasoning than that to justify their conclusions on player performance. However, I am suggesting that we often proceed without precise definitions of our standards for measuring individual success and failure, so when the wins and losses start to pile up we lose our precision and get caught up improperly conflating team and player performance to the point that player evaluations become tainted or unrealistic.

Returning to the hypothetical situation I posted above, the issue undermining the conversation is the failure to reach a mutually accepted definition of success when it comes to Brandon Jennings. Now you might identify more with Person A than Person B, or perhaps you prefer Person C's approach, but the point is that there can be a better conversation on the subject if there are some basic definition that can be agreed upon.

Logicians refer to the stated problem as the multiple endpoints phenomenon. The idea is that if you have a specific measure of success or failure, they become more difficult to achieve, but if success or failure remain generalized concepts, they become much easier to achieve because they include wider sets of outcomes. The problem is magnified when a specific criteria is either implied or asserted, but a generalized criteria is actually used. The phrase "Brandon Jennings will have a solid season" leaves a very generalized criteria that could mean many different things to many different people. Without attempting to specify the meaning of all possible outcomes, the test is no longer objective, and we expose ourselves to the risk that the claim will receive support too easily.

What kind of evidence will count as support for this claim? Shooting percentages? Overall efficiency? Assist numbers? Team record? The imprecision of the initial claim allows for any of these "multiple endpoints" to, after the fact, serve as a basis for success that may not have been acceptable criteria if success was specifically defined at the outset. The general rule to remember with regard to the multiple endpoints theory is that if two entities are sufficiently complex, mapping one onto the other will almost certainly lead to various tenuous connections between the two entities that appear to confirm a relationship. Failure to specify the meaning of outcomes allows us to interpret the meaning of those outcomes in ways that favor our initial expectations and preconceptions. It makes it easier to be correct because we leave space to define ambiguous outcomes in our favor ex post facto, but in the end that's cheating the system and undermining the quality of analysis.

An Example of Format: 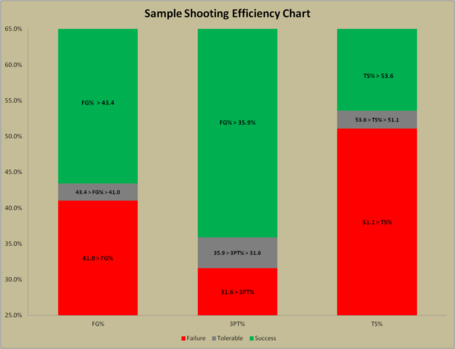