Bucks 98, Timberwolves 95: The Bucks Are Not Stopped Here

Share All sharing options for: Bucks 98, Timberwolves 95: The Bucks Are Not Stopped Here

MILWAUKEE -- Not to repeat myself, but the Bucks felt right at home at home.

At home. Full disclosure: The Timberwolves went 5-36 on the road last season. That adds up to a little shy of one win per month.

Still, this is a slightly different, more capable Timberwolves team, and all Milwaukee could do was win, and they did that, and more than that: They never trailed over the final 36 minutes of the game. Thirty-six game minutes that is, which amounts to around an hour and a thirty minutes of real time. After more than eight months away from the Bradley Center, that time was well spent, and mostly well played.

As is the custom, Milwaukee built a double-digit lead by halftime only to let the opponent slip back into the game. This time, the Bucks watched (too much watching) a 75-55 advantage turn into a 94-92 advantage.

But Brandon Jennings turned a broken play into a three-point play when he dished to Jon Leuer (first player off the bench this evening) for an and-one dunk to make it 97-92. Then Luke Ridnour drew a foul and made one free throw and missed the next, but Minnesota got the rebound. Jennings went up and came down with a rebound on Michael Beasley's missed jumper, and these are just a couple of the reasons why Brandon is back in your good graces tonight.

This was just a start, but this is just the start.

Brandon Jennings. The jury is still out on Brandon's point guard purity, but in 72 minutes through two games, he has committed a total of two turnovers -- and one of those was the result tip-toeing a toe out of bounds along the baseline tonight. Milwaukee's offense has not hummed consistently throughout the first two games, but Jennings has generally balanced aggressiveness and assertiveness with aplomb.

In the fourth quarter alone, he made 7-8 free throws, made the pass of the night, grabbed a massive rebound, and didn't turn the ball over.

In all, 24 points on 7-14 shooting with 7 assists and 2 turnovers and 1 satisfying performance.

Jon Leuer. When Bogut fouled out of the game with 2:08 remaining in regulation, it was difficult to know whether the Bradley Center crowd was cheering Bogut for a solid night's work or for Leuer, who was entering for him. In any event, the rookie earned plenty of cheers when he dunked and finished an and-one to give Milwaukee a 97-92 lead on the most important play of the game. They are all equally important, but you know what I mean.

And while that play rightfully stands out, Leuer was the first man off the bench in the first quarter and showed off advanced timing, footwork and court sense during most of his 20 minutes, in which he scored 14 points on 5-7 shooting, grabbed 8 rebounds and added two steals.

Andrew Bogut. Not to encourage 7-20 shooting nights by centers, and he missed three shots barely a minute into the game, but Bogut finds a way of finding himself in Three Bucks, and he is here with 15 points, 9 rebounds, and 3 assists in 31 minutes.

Bogut did not score too many points, but he earns bonus points for showing a pleasantly surprising bit of synergy with Jennings tonight. In the first quarter, Jennings dished to Bogut on the right block and cut to the baseline, where Bogut quickly found him for a nice reverse layup. They tried that again a couple plays later and Bogut faked a pass to Jennings and then drew a foul. In the fourth quarter, Jennings hooked up with Bogut for a hook. For the Bucks to matter, these two need to matter together, and they showed signs this evening.

13. Kevin Love made 13-15 from the free throw line -- in the first quarter. Also featured in the performance: Three dozen pump fakes (estimate) and a couple questionable calls. As Scott Skiles pointed out in the post game presser, Love's 13 first quarter throws were almost as many as the entire Bucks team made in the whole game (16). Additionally: Love is very good.

14/25. Minnesota finished with 14 assists and 25 turnovers compared to Milwaukee's 24 assists and 12 turnovers, and nothing was more important.

Rated PG. David Kahn remains the planet's foremost hoarder of point guards, so it could not have gone over very well that Milwaukee's three point men contributed in real ways to the win. Luke Ridnour (17 points, 7-10 fg) was nifty like he was and is always nifty in Milwaukee, but protégé Jennings mostly matched him. Meanwhile, Beno Udrih (8 points, 4-6 fg) showed off a nice mid-range touch and Shaun Livingston (4 points, 2-6) was not so hot shooting but made another pretty no-look pass and generally looked able and threatening again as Scott Skiles gave him sixth man minutes (24).

Bogut from outside. For someone who shot a cool 0-28 from beyond 15 feet last season, Bogut looked nice and comfortable hanging out there tonight. Not only did he make two (for two) long jumpers this evening, by the third quarter was going through his legs and taking said jumpers off the dribble. 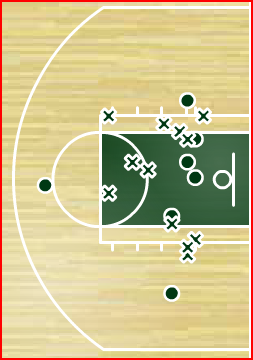 Better, faster. You might think that a faster-paced game would favor the team with Ricky Rubio, Derrick Williams, Michael Beasley, Luke Ridnour, J.J. Barea, and Wesley Johnson rather than the team that only averaged 10 fastbreak points per game last season, last in the NBA. You may also have heard the Bucks vowed to pick up the pace this season. They played a bit faster than usual in the loss to the Bobcats, and then sped it up even more against the Timberwolves (estimated 99 possessions via HoopData), with success: The Bucks forced eight turnovers and racked up 10 fastbreak in the second quarter alone, when they outscored the Timberwolves 28-18. Milwaukee also scored 16 points in the paint in the second quarter, and that is not a coincidence.

Closing time. A double-digit lead should be safe for a team that prides itself on the defensive end, but with two games of evidence that is decidedly not the case. A night after blowing an 11-point halftime lead in a loss to the Bobcats, the Bucks built a 20-point lead midway through the third quarter only to watch Minnesota strike to within two points at 94-92 with less than two minutes in the fourth quarter. A nice finish, but feel free to drop the dramatics, team.

Missing. Sure, Drew Gooden's suspension and the ailments of Carlos Delfino (right wrist sprain), Luc Mbah a Moute (knee), and Tobias Harris (dehydration) have opened the way for Jon Leuer, Shaun Livingston and others to make positive impressions, but after last season's injury-ravaged year, a relatively full squad would be novel and beneficial.

Three Bad. After shooting 8-23 on threes against Charlotte, the Bucks shot 2-16 against Minnesota from outside. The result is a 25.6 % mark on three-pointers, something that would not be as much of a worry if they had not shot 30.7 % in the preseason or 34.2 % (24th overall) last season. Due to get hot?