Share All sharing options for: Bucks 102, Wizards 81: Points And Points In Milwaukee 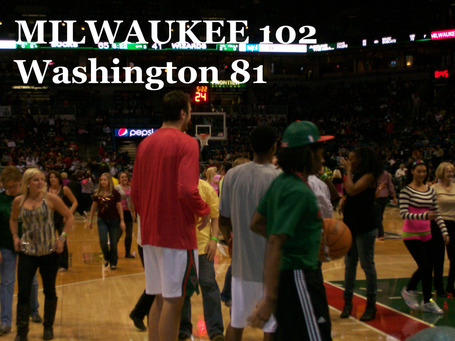 MILWAUKEE -- The Wizards? They peaked in warmups.

Not that Roger Mason was going to fix things anyway, but Flip Saunders checked in the inactive Mason in the first quarter, eventually netting his team a technical. This is nothing more than a quirky anecdote, but it functions as a microcosm of the disorganized nature of the Wizards both offensively and defensively. Captain Andray Blatche and company earned some oohs before the game with warmup dunks, but they mostly earned blahs during the game.

The Bucks built a 24-point lead in the first half as the team made seven of its first 10 threes and lit the Bradley Center with a purposeful and fast transition offense. They familiarly gave Washington life in the third quarter, but the final margin was 21 points. Brandon Jennings managed the game with distinction from start to end and all of that depth is starting to feel like the best of problems.

Forgive that the Bucks were mostly lamb (doe?) in between. They started the calendar year by completing a season sweep over the eventual champion Mavericks, and they closed the year tonight with a blowout home win over the Wizards. Not only is the year over, 65 points by halftime signaled last season is also over.

Ersan Ilyasova. Milwaukee controlled this game from the start, and Ilyasova was the perfect player in the near-perfect start. Scott Skiles could not think of taking him out of the game in the first quarter, when he racked up 10 points on 4-5 shooting, 4 rebounds, and 3 assists. He didn't play a minute of the fourth quarter as Skiles opted to run with Jennings/Udrih/Delfino/Leuer/Bogut down the stretch, and that was just fine. Ilyasova picked his spots, and so did Skiles. This is a team again.

Jennings was very good tonight offensively (22 points, 5 assists) and while John Wall was simply off, usually star players are not all the way off unless someone is pushing them all the way off.

Carlos Delfino. A rousing return for Delfino, and a reminder why he has endeared himself so well since arriving in Milwaukee. Mike Dunleavy was absolutely excellent tonight (13 points on 3-4 shooting from the field), but Delfino ended up earning more minutes than anyone other than Brandon Jennings or Andrew Bogut, providing the deep threat (3-4 on three-pointers) that the Bucks had lacked over the first two games of the season. Overall, 15 points along with 6 rebounds and zero turnovers in 29 minutes.

10.5 % John Wall shot 1-9 from the field -- and that was actually better than his his fellow starting guard, Nick Young, who shot 1-10. Together, Washington's starting backcourt shot a combined 2-19 from the field, or 10.5 %. Kudos to Milwaukee's perimeter defenders.

20. The Bucks committed 20 turnovers. But Scott Skiles was not to alarmed by that after the game.

Skiles: I thought in the first half we were trying to overpass a little bit, which we have done quite a bit, which I think is a good sign, and bodes well for us, because of our talent at the 1, 2, and 3 spots. We were moving and cutting, and trying to hit cutters, and they deflected a couple balls and got turnovers. But I think we are going to be a low turnover team. We have been so far. So I'm not going to worry about that.

10. Ten players played for the Bucks, and all of them registered at least one assist. Seven players had at least two assists, and four players finished with at least four assists. The Bucks piled up 26 assists on 39 field goals. Here is one of the few unassisted baskets:

Everyone who made a three for the Bucks tonight -- Mike Dunleavy, Brandon Jennings, Ersan Ilyasova, Stephen Jackson, and Carlos Delfino -- has a demonstrated and real history of success shooting from the outside. In fact, all five boast prior individual seasons in which they made a very respectable percentage of threes: Dunleavy 42.4 %, Jennings 37.4 %, Ilyasova 36.5 %, Jackson 36.3 %, Delfino 38.2 %.

We can't expect them to match their career bests all at the same time now, of course, but with the better spacing, less dribbling, and faster passing we have seen so far this season, there is no reason why they cannot at least trend toward those numbers. Tonight was the start of that.

Good Returns and Gooden's Non-Return. Carlos Delfino made a very good return to the lineup after being out with a sprained wrist, while Drew Gooden did not play despite being healthy and ready.

Maybe Delfino does not need to start after all, and maybe he still can play a valuable role on the team. Meanwhile, Gooden did not play simply because the Bucks were playing well enough without him. And having an overabundance of useful players on the bench is a conundrum, but it is also the best type of conundrum.

Third Quarter Collapses. The Bucks have been outscored by scores of 30-14, 20-19, and 26-13 in third quarters so far this season. For the record, Milwaukee's worst quarter last season (narrowly) was the third quarter, as they were outscored by -0.6 points per game in the third.

Skiles: There are two guys in the starting lineup that I have been coaching for three regular season games. We don't know everybody as well as we need to know everybody right now, that is just part of it. I don't think three, or even with the two exhibition games, five games is a trend or a cause for a big concern, but we do have to talk about it as a group and address and see what we can do to get a better start in the third.

Hit The Road, Jax. The Bucks now hit the road for a five-game west coast swing. Not only that, but the five games are in the span of seven days. Short and not sweet:

Milwaukee never experienced a road trip quite so brutal last season -- they had three different three game roadies, with two of those being out west. On the first one they actually took two of three, getting rocked in the first game in Portland before improbably blowing out the Lakers and topping the Kings in late-December. The second trip westward was not so kind, as they dropped games to the Clippers, Suns, and Warriors.