Share All sharing options for: Bucks 110 Nets 95: Nothing but Net for Bucks

MILWAUKEE --  Both teams looked like last season's versions of themselves on Friday in Milwaukee.

And that was a surprise. Because coming in, the Nets were more like last year's Milwaukee -- if only for the last week and a half. They had won five of six, boasting both high-scoring wins against bad teams (Toronto) and grind-it-out victories against the best (Boston). Meanwhile, the Bucks were looking a lot like the laughingstock of the NBA in bewildering blowout losses.

But lost in these most recent trends was that the Nets had won all five of those March games in New Jersey. And none of the big, bad, Bucks losses of late came at the BC. And in the end neither of these teams are all that good or all that horrible. They are both on the cusp of being average -- and teams like that usually win at home and lose on the road. Not to simplify or downplay the win here, but to simplify and downplay the win here: The Nets have won four away games in almost five months.

So the Nets make a lot of teams look good a lot in these situations; to wit, the Bucks popped in 115 on them a couple months ago, and that didn't exactly start an offensive revolution. But 110 is 110. And 110 is almost twice as many as the team scored a few days back.

Milwaukee scored 110 points -- coincidentally (not coincidentally?) their second highest output of the season after the 115 they previously scored against the Nets. After a pretty tight first quarter that Deron Williams concluded by knocking in a 63-footer, the Bucks deflated and let Jordan Farmar and Travis Outlaw take the lead into halftime. But Milwaukee just kept shifting up in the second half. Carlos Delfino swung in five more triples in the second half (after three in the first half), John Salmons got all mid-rangey on the Nets, and Brandon Jennings and Luc Mbah a Moute worked on the same wavelength at least three times, including a couple of angled pick-and-roll hook-ups.

It is easy to say the team passed the ball well when the shots go in, but the Bucks did handle pressure coolly. The Nets hung around for most of the game, and tried to trap Brandon Jennings down 92-84 midway through the fourth quarter (because the Bucks had 92 points midway through the fourth quarter...) but Jennings found Mbah a Moute (as was the trend) who swung it to Delfino for a corner three (as also was the trend). And the Bucks finished the game, converting on seven of their final eight possessions.

Carlos Delfino. Carlitos was due for a breakout after missing all seven shots against Orlando on Wednesday. Maybe not to this extent. Delfino splashed in a career-high eight three-pointers, making 8-11 from deep (and 1-2 on twos) to tie a season-best 26 points as Coach Skiles just could not take the Argentine out of the game (44 minutes). He also added three more steals -- the sixth time in ten March games that he's reached that number. Delfino has not scored 6+ points in two straight games all month, so keep an eye on #10 on Sunday afternoon. But until then let both of your eyes take this in (Carlos hangs out in the corners, Jersey): 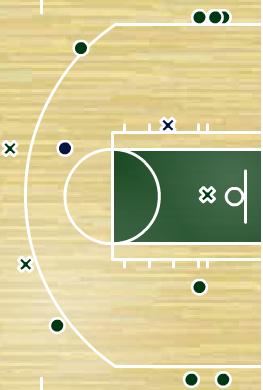 John Salmons. The Fish has followed three of his very worst performances of the year with his best back-to-back games of the season. And while it was more of a quarter than a game against Orlando, tonight Salmons rocked it all four quarters. Still till not getting a ton at the rim, but Salmons is resdisovering that famous/infamous mid-range game of his. And as the primary ballhandler on a hot-shooting team, Salmons pitched in seven assists along with his 25 points and only turned it over twice.

Brandon Jennings. Though we didn't know it at the time, Brandon broke his foot in a game against Deron Williams and the Jazz exactly three months ago. His first game back from injury was an 11-minute, 0-3 cameo against the Nets about seven weeks ago. On that night, Keyon Dooling got the better of Devin Harris.

Tonight, coincidentally, Jennings bested Williams, new Net point guard. He made some bright passes that were made brighter by the unusually excellent cutting, driving, and shooting of his teammates. Played a really effective game without making a three-pointer, ending with 16/4/10 and just one turnover in 42 minutes.

5. All five starters made at least half of their field goals... for the Bucks. I know you probably did not get to watch the game, and the box score reads something like an official press release from the Milwaukee Bucks, but I was there -- and this really happened.

4. Andrew Bogut had only blocked a couple shots in his last three games, but he is still leading everyone in blocks per game, and he stuffed four shots tonight.

59.2 % The Bucks matched a season-low with four fastbreak points for the second game in a row. Since fastbreak points are typically some of the most high-percentage points a team scores, this makes the 110-point output even more improbable. Particularly since the Bucks shot 1-5 on the break -- meaning they shot 45-76 (.592) in the halfcourt.

Salm On. I am wary to bathe in any brand of optimism when it comes to anything Bucks-related this year -- particularly John Salmons. But the past two games are a good start for him. With Corey Maggette's #5 not on the tip of Scott Skiles' tongue anymore, the coach has slid Salmons in at the three with some success recently. I asked Skiles after the game about playing Salmons -- who has only played 5 % of all small forward minutes for the Bucks this season -- more at the three of late:

I have been putting him there quite a bit because I have been playing Keyon at the two, and bringing in Earl at the backup one. Keyon's ability to guard ones and twos has allowed us to catch him off the ball and get in the game with a point guard.

This shuffle has contributed to killing two birds with one stone, if Corey Maggette and Chris Douglas-Roberts are birds, as neither are getting many minutes these days. Salmons has some history of playing small forward -- he did with the Kings while Mike Bibby and Kevin Martin manned the backcourt, and he even played a fair share at the three for the Bucks last season, most often with Ridnour and Stackhouse. The fact that Skiles is trending to playing backup point guard Dooling at backup shooting guard and starting small forward Salmons at backup small forward reaffirms what is already obvious about his lack of confidence in his actual backup shooting guards and small forwards.

Starters. The starters scored 28 of the 30 fourth quarter points and racked up 95 points themselves overall, which is more than the team averages altogether in an entire game this season. And these five that looked so in tune tonight -- Jennings/Salmons/Delfino/Mbah a Moute/Bogut -- are the five that made last season... last season.

Setting the Pace. This was actually a win-win result for people watching the NCAA tournament scouting lottery picks, especially since the Pacers beat the Bulls in what has been a dreamy season for rival Chicago fans. But Indiana's overtime win tonight also means the Bucks remain stuck 2.5 behind them for the final playoff spot.

No TV. Games against the Pacers and Nets and the like might not seem like real viewing winners when the schedule arrives, but most everyone missed Andrew Bogut's game-winning tip-in earlier this season, and now this fine game was not televised locally either. Especially frustrating after all of the rotten games that you probably have watched the team play this season.

Offseason swingmen. Exactly 15 months ago, the Bucks beat the Nets 99-85 at the BC to drop New Jersey to 0-11. The only real bright spot for them was Chris Douglas-Roberts, who rang up 31 points. Milwaukee was reasonable to like what they saw -- and they snatched him up in what looked like a buyer's bargain over the summer. Now Douglas-Roberts is mostly confined to the bench. Tonight he did not play because of a sprained right ankle, and I saw him limping a bit in the tunnel after the game. But that did not even make the news or the talking points before or after the game, because the most normal thing about a Bucks game is CD-R not playing.

Meanwhile, Corey Maggette worked his way into familiar CD-R territory with a DNP-CD tonight. The Bucks were firing on all cylinders, and I am not calling for Coach Skiles to have played Maggette. This is just a comment on two offseason swingmen who did not work out, in a season that has not worked out.