On the first day of spring, the ideas of rebirth, renewal, and regrowth applied to all 12 of the first minutes of the game for the Milwaukee Bucks. Exactly one Sunday after scoring nine points in the first quarter in Boston, the Bucks allowed just nine points in the first quarter to New York. That might normally result in a slim lead for Milwaukee, but instead the team blazed its way to 32 first-quarter points. And while the game took on the rainy disposition outside the Bradley Center as the Knicks came almost all the way back during the second quarter, Milwaukee never relinquished its lead. In a season that has seemed lost since the start, the Bucks led this game from start to finish.

Just like in the win over New Jersey on Friday, the starters completely carried the night for Milwaukee. Carlos Delfino made eight threes in the previous win, and he was even better tonight. He blew away and personally outscored the Knicks 10-9 in the first quarter and then put them away with 12 points in the fourth quarter. Brandon Jennings narrowly missed a triple-double with 14/11/9 in a near-perfect offensive game at point guard aside from four missed three-pointers. John Salmons went for 22 more points in a continuation of his spring mini-revival. Andrew Bogut was the defensive rock and a legitimate offensive weapon. And Luc Mbah a Moute was probably the best all-around player of them all.

So about those five: Jennings/Salmons/Delfino/Mbah a Moute/Bogut. They are not the group the started the season starting. But they are the ones that started most of last season. And they are clicking like a group that has played an hour or two of winning hoops together. Of the 21 starting lineup combinations that the Bucks have tried this season, this is the most common one. But this marked just their 11th start together. They are now a modest 6-5 after two straight impressive ones. Nothing overwhelming, but these five are nothing even resembling the 22-36 record of all of the other starting fives.

Carlos Delfino. The wild card went wild again. One game after throwing in eight three-pointers against the Nets, this is the one where Carlitos established a career-high 30 points. This time Delfino made 6-11 from deep, and the unusual part is that only one was a corner three. But Delfino did not just camp out beyond the perimeter. While he did not score a single one of his 30 points in the lane, he repeatedly got to the line and made 8-10 free throws -- a notable total considering he had made seven free throws in the past seven games combined. And he did mix it up in the painted area, grabbing 11 rebounds -- tying his second highest rebound total ever -- including three on the offensive end. 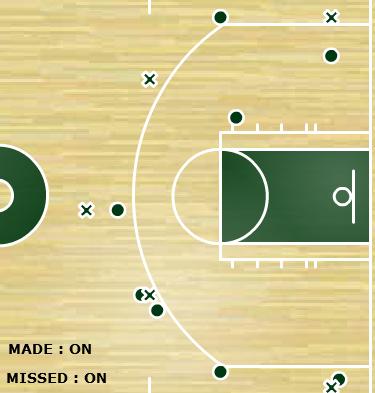 Luc Mbah a Moute. The Prince hassled Amare Stoudemire into a contested 14-foot brick of a jumpshot on New York's first offensive possession of the game, foredooming Stoudemire's wayward 11-28 shooting night. Mbah a Moute literally had a hand in stopping all three of New York's relevant offensive players. He frustrated Stoudemire, blocked Billups, and breathed all over Anthony. Mbah a Moute also chipped in with an atypical offensive performance -- notably making 13-13 at the free-throw line. Although he (rightfully) has a reputation as an offensive zero, Mbah a Moute actually has a quick first step off the dribble, and he is the Buck most prone to make a strong (if not always fruitful) drive to the basket in the halfcourt -- now that Maggette no longer plays. In a team-high 45 minutes, Mbah a Moute racked up 19/8/1 along with three steals and three blocks. Brilliant.

Brandon Jennings. Jennings was downright point guardy (with five assists) and a bit power forwardy (with six rebounds) in the team's smokin' 32-point first quarter. Jennings founds his mates in rhythm and with space, and they rewarded him by making jumpers. Indeed, all five of Brandon's first quarter assists were results of made jump-shots:

I once had 30 in a game. And I would have had zero if guys were not making shots. The other guys deserve credit for that. It's both. You've got to see people and then when you deliver it they've got to knock it down. And he (Jennings) had really nice vision tonight.

31. Milwaukee made 31-37 free throws -- its second highest output at the line this season. And not only that, but the starting five accounted for all of them.

3-20. Before the game, Coach Skiles talked about needing to limit players other than the team's big three:

Tony Douglas kind of went nuts on us. We can't let other guys come into the game and hurt us, their main players do enough damage. When guys who don't start or even others come in and play like that it hurts.

Milwaukee's bench only scored two points, but New York's bench may have been even worse. While Bucks' reverves only shot 1-6 (in 27 minutes), they also did not really play a role in the game, whereas Knicks' reserves actively hurt the team, shooting 3-20 (in 103 minutes). That contrasted the last time these teams met when Toney Douglas boosted New York with 22 points off the bench on 10-12 shooting. Douglas shot 3-13 tonight.

Closing a close one. The fact that this was even a close game is a bit disconcerting, but things tend to even out when two relatively evenly matched teams play for 48 minutes. But instead of dissolving in the pressure of the moment, the Bucks took control down the stretch.

Things got equal parts sloppy and chippy midway through the fourth quarter. With the Bucks up 84-81, Andrew Bogut hauled in a rebound off a Chauncey Billups missed three. Carmelo Anthony pressed closely against Bogut and the two exchanged words. Both were hit with technicals. On Milwaukee's ensuing offensive trip, Carlos Delfino drew a foul on Carmelo Anthony to the delight of the crowd. 86-81 Bucks. Then Anthony came down and hit a leaner over Delfino -- but he was hit with an offensive foul. Delfino also slotted a three with Anthony all over him to push the Bucks to a 91-84 lead. The Knicks kept tugging back, but Milwaukee made 10 of its final 11 free throws.

They started the game and they finished the game.

Rest. The Bucks get a couple days of rest before hosting the Kings on Wednesday, which is particularly beneficial given the massive amount of minutes the starters played this weekend.

Bogut. This marks three straight very competent games offensively for Bogut (21, 13, and 13 points -- shooting at least 50 % in each game). He is going both directions for hook shots and generally looks comfortable moving out there. For both short-term and long-term considerations, Bogut's spriteliness and coinciding offensive reawakening is the best of signs.

Nothing in reserve. The bench scored two points, which is not so alarming when you consider that they only played 27 minutes combined. Corey Maggete, Chris Douglas-Roberts, and Earl Barron earned DNP-CDs. Maggette's fall from the rotation is fine (because the team is thriving), frustrating (because the team seemed to think at one point that Maggette would be an important part of the team and as a result paid him), and predictable (because Coach Skiles just adores players known for not playing defense and killing ball movement) all at once. Skiles, after the game, on the bench:

I probably wasn't as patient with the bench as I could have been. But it wasn't as much because I felt like the bench wasn't giving us anything. It was more the starters had it rolling. It was important to get them back in the game and I didn't want to leave anybody out too long. We don't play again until Wednesday, so a lot of those things played into it.