MILWAUKEE -- Better never than late. With the clock ticking on the season, that was Milwaukee's response to a playoff push this weekend.

For the vast majority of NBA fans with the fortune of not being subjected to watching the team on a nightly basis, this nationally televised game neatly wrapped up the last four Bucks months: they defend, dribble disproportionately, go cold offensively, cannot overcome said offensive cold-spell, and lose a competitive but not overly dramatic game. The names are ever-interchangeable -- tonight Chris Douglas-Roberts played some and the Earls (Boykins and Barron) did not play at all -- but the formula remains.

The third quarter disappearing offense act did not last quite as long as it did against the Suns two nights earlier -- still the Bucks did not score a point for three minutes and twenty-nine seconds this time. They were up 58-54. By the time they scored again, they trailed 62-60. They did not lead again.

Luc Mbah a Moute. The Prince continues to ingratiate himself to Bucks fans with excellent defense, but he also has set a season-high in points in two straight games now. Mbah a Moute scored 16 against the Bulls, missed a couple games due to sickness, and then dropped 19 points against the Celtics tonight. He is not the offensive savior (as an airball and a play in which he dropped the ball out of bounds instead of making an open layup attest to), but he at least knows his range, and is willing to give it a try. The Bucks just dribbled around for about 15 seconds before Mbah a Moute drove hard to the rim with the team down 86-83 and and less than a minute remaining. Kevin Garnett stuffed him, but at least Mbah a Moute was ready for it.

Brandon Jennings. One game after Steve Nash turned the ball over seven times, Rajon Rondo coughed it up eight times against Jennings and the the Bucks tonight. While a drowsy Rondo never really turned it around like Nash did in the second half, Jennings played with bolts of energy for most of his 40 minutes. Notably, he made three really fine passes that resulted in assists in the first quarter, and if it seems like all of his assists are so difficult and improbable, please refer to the starting lineup -- you will find that absolutely none of the players are the least bit threatening going to the hoop, and they can't really make jumpers either.

Not quite the star performance to put Milwaukee over the top -- he shot just 8-19 and only scored three points in the fourth quarter -- but a 23/6/5 line along with three steals and a block is fair. Jennings even dropped in a couple floaters and made one particularly sparkling dash to the hoop for an and-one off the glass.

0. Larry Sanders, Jon Brockman, and Carlos Delfino -- the team's starting center, power forward, and small forward, respectively -- did not take a single free throw in 86 combined minutes. That is not so surprising, but that is also bad that it is not so surprising. The Bucks made 9-13 total, representing their lowest number of makes from the line in more than two months.

7:54. The Celtics pulled a Milwaukee Bucks Special and made just one field goal in seven minutes and fifty-four seconds spanning the end of the first quarter and more than seven minutes to start the second quarter. They only scored four points in that time.

Playoff possibility. If the Bucks make the playoffs, it will be an indictment on the lower three-quarters of the Eastern Conference. But it will also mean that Milwaukee will probably play Boston in a 1 v 8 matchup. And though they have lost both games to Boston this season, they also have played them very close both times.

Granted, neither team was anywhere near full strength tonight, and the Bucks probably wouldn't see the Celtics start the fourth quarter with an Avery Bradley/Ray Allen/Sasha Pavlovic/Jeff Green/Troy Murphy lineup in a playoff game. And both teams look a lot different than the ones that faced off in an overtime Boston victory in early-November. But a potential Bucks/Celtics playoff series could offer possible competitiveness and guaranteed chippiness -- as two close games and continued Kevin Garnett antics (he sort of punched/forearmed Brandon Jennings at the end of one play tonight) suggest.

Celtics fans. Why were thousands of people at the Bradley Center fanatically cheering when Jeff Green and Sasha Pavlovic scored again?

Salmons in the paint. In the last three games, John Salmons has attempted 50 field goals. In that same span, he has made one in the paint. Tonight against Boston, he shot 4-13, and only just one of those attempts (a miss) came in the painted area, per photographic evidence: 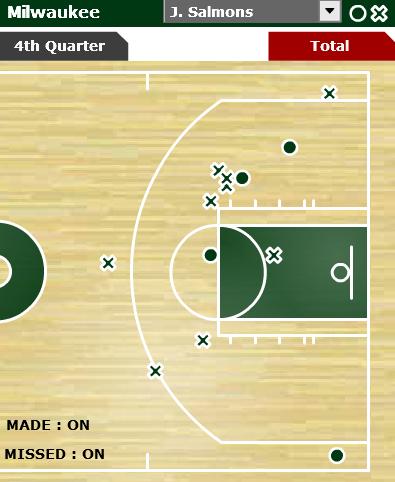 Everybody does not hate Chris. For most of the season, when Salmons does not cut it offensively (which coincidentally, has also been most of the season), we could at least cling to the idea that Chris Douglas-Roberts might do better if he were only given a chance. But as Jeremy Schmidt tweeted when Douglas-Roberts was checking in to the delight of a portion of the crowd, his popularity in Milwaukee seemingly flows when he doesn't play and ebbs when he actually does play. That pattern should continue after 13 scoreless minutes and a -10 differential tonight. Like most positions, the shooting guard spot does not have solutions, just problems.