Bucks 95, Wizards 76: Jennings, Salmons and Bogut turn back the clock

Share All sharing options for: Bucks 95, Wizards 76: Jennings, Salmons and Bogut turn back the clock

Say what you will about the Bucks' fading playoff hopes, but don't accuse them of rolling over.

Facing a young and decidedly sloppy Wizards team, Scott Skiles' bunch looked a bit more like the 09/10 Bucks, as Brandon Jennings, John Salmons and Andrew Bogut reminded everyone that at one point it wasn't totally ridiculous to call them a "Big Three." While John Wall and Nick Young struggled (9/30 fg, 20 pts, 10 turnovers), Salmons and Jennings took care of business (32 of 45 points in the first half) and the ball (two turnovers), helping the Bucks build a 15-point halftime lead that Washington never seriously challenged in the second half.

The return of Bogut also gave the Bucks someone they could feed in the post again, though he was arguably even more valuable operating as a passer from the high post. Looking more like the guy who frequently played up top in his first two seasons, Bogut picked out Salmons with a gorgeous pass on the opening possession en route to a season-high seven assists to go with 14 points (7/13 shooting) and nine boards.

So is there still time for a playoff push?  It seems like we've been saying "now or never" for about a month now, and I have to admit my gut has been leaning towards "never" lately.  After all, it's tough to see momentum building for a Bucks team that hasn't won consecutive games since late January and had dropped six straight on the road before tonight. But combined with Philly's win in Indiana, the Bucks' 24th win puts them just 2.5 games back of the Pacers for the final East playoff spot, and they can make it an even two games if they take care of business at home tomorrow night against the Cavaliers.

The playoffs might still be a stretch, but ping-pong balls can wait for at least one more day.

The first quarter lived up to its billing--a terrible road team against a terrible team in general--as neither side distinguished itself in the early going. But the Bucks made their move late in the second quarter as Washington became increasingly careless and at one point rolled out a lineup featuring five rookies. They also struggled to put the ball in the hole--kind of a big deal in basketball--whether it was from three (2/12), two (30/73) or the foul line (10/19). Not that the Bucks would have any sympathy for that kind of problem.

Washington's eleven first half turnovers turned into 16 Buck points, keying a 21-6 run over the final five minutes that handed the Bucks a surprising 51-36 halftime edge. Bogut's return to the lineup also paid immediate dividends, as the Aussie scored 10 in the half and picked the Wiz apart with his passing. The Bucks were already up 41-32 when six straight points came courtesy of Bogut's playmaking: a touchdown pass gave Delfino a breakaway dunk; a bullet pass from the top of the key gave the cutting Jennings a layup; and an outlet pass to Jennings led to a fast break layup from Salmons. He's the next Vlade Divac!

After missing his first three attempts from deep, Jennings then capped the half by racing up court to bank in a buzzer-beating triple to make it 51-36 at the break. Just as importantly, the third quarter collapse that has been a staple of the Bucks' game of late never materialized. The Wizards continued to turn it over almost every time they tried to pass the ball into the middle of the court, and not even a slew of missed Bucks layups could save the Wizards from themselves. Jennings scored ten in the period, including a desperation three at the end of the shot clock to give the Bucks a 67-50 lead and another moments later to make it 72-50.  Any illusion of a competitive game was gone at that point, though Skiles curiously opted to play Bogut extended minutes in the final period.

John Salmons. Alex has been tracking Salmons' struggles to score around the hoop over the past few games, and this one didn't start any more promisingly in that regard: after Bogut found him on a pretty backdoor cut, Salmons went up to dunk the ball only to lose his grip and send the ball over the rim entirely. Yeesh.

Thankfully that was not an indication of what was to come. He splashed a three moments later and went on to score 11 in the first quarter and another seven in the second (3/4 fg in the paint!), in addition to five dimes and five boards. Nothing too flashy, but plenty effective. 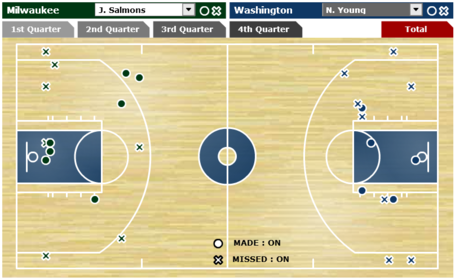 Brandon Jennings. The last time Jennings made at least half his shots in a game was waaaaaaay back on December 4 against the Magic, matching that effort tonight with an encouraging (and identical)10/20 line. While he led the Bucks in both shots and points (23), the kid was also fairly judicious about his usage, picking his spots in the early going and pushing the ball in transition whenever he could. He could have had a few more assists if his mates could make layups, but all told it's always encouraging to watch Jennings clearly outplay a superstar-in-waiting like Wall.  I'm not sure the average sports fan would have found it all that enthralling, but Jennings' play at least had Bucks fans smiling.

Andrew Bogut. The bad: Bogut went block-less for just the second time since December 20 and let JaVale McGee jump over him for a number of big rebounds. The good: Bogut was a steadying presence in the post, created a bunch of easy buckets with his passing, and frustrated McGee defensively for most of the night. Overall, McGee was terrific on the glass but looked desperate to force shots and was sloppy to boot (four turnovers), which kind of summarized the Wizards' night.

22. The Wizards coughed it up 11 times in each half, with Wall, Crawford, and Young combining for 14 by themselves. That provided the Bucks plenty of opportunities to get out on the break for easy looks, and while it didn't stop them from missing about a half dozen layups, even the Bucks will score points if you give them enough fast break opportunities.

18. Both teams scored 18 points on the break, which I found a bit surprising since it seemed like the Bucks had a clear advantage in that category. Maybe the Wiz's numbers were skewed towards garbage time, and in all honesty the Bucks could have had a bunch more if they were semi-competent finishers. Alas, they aren't, but the Wizards were so careless that the Bucks still managed to nearly double their usual fast break production (10.1 ppg).

19. The one thing the Wiz had going for them was their relentless pursuit of their own (frequent) misses, as they nabbed 19 offensive rebounds on their way to a 52-42 edge on the glass.

Big Three. Remember these guys?  Salmons, Jennings and Bogut have all been disappointing in their own ways this season, and at this point it's anyone's guess if they can all show up at the same time with any sort of regularity. Thankfully, Jennings does appear to be rediscovering his game a bit, which is probably the main thing I'm hoping to see from the season's last 20 games.

It's not that the other guys aren't important, but I just don't see them as x-factors in the same way Jennings is. Bogut might be a bit of a lost cause offensively until he has a full summer (and possibly a 'scope) to rest up his arm, but otherwise we have a good sense of just how good he can be (namely: damn good). Meanwhile, Salmons' age may well preclude him from ever replicating his fine form down the stretch last season, but we kind of knew that going into the season as well. Jennings is the only one whose best days should still be ahead of him, and it'd be nice to see more evidence of that in the final month of the season.

Moving. If there was a theme to the Bucks' success tonight it was movement. The transition buckets were obviously a big part of it, but even in half court the Bucks seemed a bit livelier--Bogut picked out Salmons, Delfino, and Jennings on backdoor cuts, and the big man also got in the act with a couple easy buckets off back screens along the baseline.

Quarter-by-quarter. The Bucks haven't shown much killer instinct this season, but give them credit for killing the Wiz off fairly early this time around. After taking a one point lead into the second quarter, the Bucks opened up a big halftime lead and extended it even further in the third, meaning there was zero drama down the stretch as Jennings and Salmons took it easy for the entirety of the fourth.

Mbah a Moute. He contributes in many ways other than scoring, but you'd be hard-pressed to say this was one of Luc Mbah a Moute's better games. Starting for the first time in a couple weeks, the Prince scored just a single point and grabbed five rebounds in 33 minutes.

Easy street. With games against Boston, Orlando and Atlanta on the docket next week, the Bucks almost have to win their next two home games against the Cavs and Sixers.

Injury. Bogut's return is the most important thing, but the Bucks have still not set a timetable for Ersan Ilyasova's return and they missed Corey Maggette tonight as well. No wonder Zach Greinke got hurt.