Comparing the Bucks' injuries to a decade's worth of NBA data

Share All sharing options for: Comparing the Bucks' injuries to a decade's worth of NBA data

As the lockout churns along and the glimmer of the draft has ended, there's not much to talk about right now other than the gloom and doom that comes with the ugly rhetoric of sports labor disputes. (Hey, look, a schedule! ...oh.) So, let's find something else to talk about. Let's talk about injuries. (I know, not exactly uncharted territory here...)

Management, coaches, and fans analyze their teams inside and out during the offseason. For those associated with the organization, their jobs depend on it, while we the fans just do it for fun. However, the constant is that neither seem to fully take into account injuries that their team might have down the road. And really, how can anybody? Though some players over time prove to be more durable than others, injuries are to a large extent unpredictable.

And after this past season, most Bucks fans were left never wanting to hear the word "injury" again. The Bucks' seemingly absurd amount of injuries became a point that GM John Hammond and crew came back to time and time again as a major reason for the Bucks' disappointing season. In January, I compared the amount of injuries the Bucks suffered (through that time) to the rest of the league, corroborating the notion that the Bucks were the hardest hit team in the league as far injuries go.

So, out of curiosity I thought that it might be interesting to see how injuries stacked up among all teams over the last 10 years. It's a long task with quite a bit of room for error (isn't this getting you excited?!) but in the end I think there are some interesting things to look over here. Kevin Pelton from Basketball Prospectus did something similar for team injuries this year alone, only he took it a step further by looking at minutes rather than games lost and then applying WARP (Wins Above Replacement Player) to see the value for each player lost. Which is important, since missing LeBron James is very different from missing Mario Chalmers, even if both guys qualify generically as 20+mpg rotation players. This isn't going to be quite as rigorous as Pelton's work, but by looking at a longer time period we can see some interesting trends around team injuries and how it might impact performance. Explanation of results and methodology after the jump.

For this, I used the data from the excellent Basketball Reference. I started with the first team alphabetically by city (Atlanta), starting with the 2000-2001 season. I opened three BR tabs (no, not Bleacher Report) for the roster/stats of that year's team, the player transactions they made during that year, and finally the schedule of the team.

I first looked at the transactions to see if any player movement occurred throughout the season for that particular team. Then, I looked at the roster and only examined the players who played an average of over 20 minutes per game, and only the top nine players if there was more than nine 20 minute players (the numbers will be different than Pelton's piece because he looked at all players, not just the top nine). Obviously players don't miss games just because of injury--suspensions and DNPs also factor in--but by restricting the sample to a team's top nine I tried to only look at rotation players who would be expected to play in every game.

I then subtracted the amount of games they played from total possible games they could have played. If a player moved during the season, I looked at the schedule and dates of when they were traded to find out how many possible games they could have played with their team before being traded/waived, and subtracted from there. The same goes for if a team signed a new player somewhere in the middle of a season. If a player wasn't moved at all, I kept their total possible games at 82. I did this for all 30 teams in the last decade, from the 2000-01 season to 2010-11. Here is the simple chart: 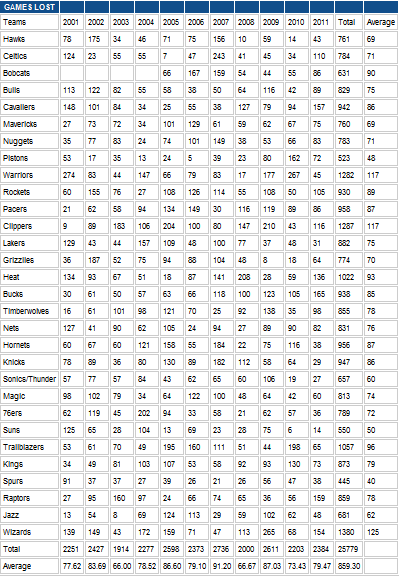 The next chart is the availability percentage of each team for every year.   It's basically an estimate of what percentage of games each of their top 9 players played in, dividing the amount of games missed by 9 *82 (9 players by 82 games).  Keep in mind that it won't be completely accurate because some players were traded before they get the chance to play in 82 games. 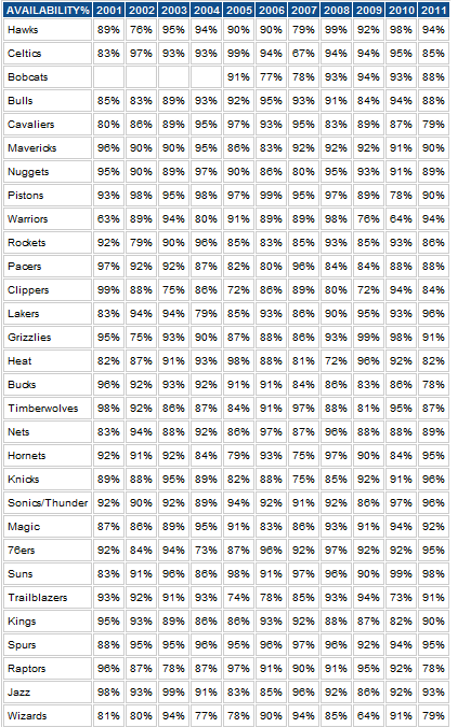 You can certainly make your own conclusions based on this.  The Bucks' percentages were all above 90% until 2007, when they began to dip. 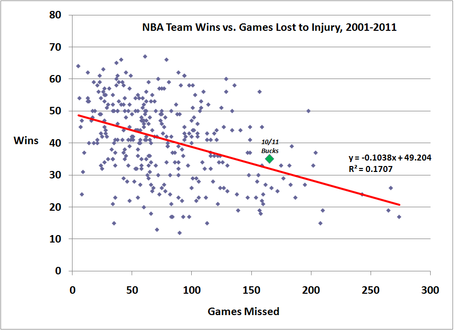 Introducing: Randomly scattered dots!  Actually, they aren't random.  It's a culmination of all the wins and injury data.  Each data point represents a team in the last decade, and is placed according to the amount of wins they had vs. the amount of total games missed by players in that season.

Simplifying everything and ignoring all outside factors, basically this graph would tell you that the average team with zero injuries starts out with 49 wins. Then, for every game lost by one of the top 9 rotation players, a team loses on average 0.1 wins. Since the average team had around 80 games lost due to injuries per year, that means the average team won 41 games (internal consistency, huzzah!). Again, this is really oversimplifying it, but it provides a general idea of how injuries impact a team. The regression's r-squared is fairly low at just 0.16, but the coefficient of 0.1 is statistically significant from zero: the 95% confidence interval suggests between 0.078 and 0.128 wins are lost for each game missed due to injury. Ideally you'd specify a much more complete regression factoring in all the other aspects which impact wins and losses, but as a first approximation it's worth considering. Overall,the closer to the bottom left the more underachieving the team, the closer to the top right the more overachieving the team.

For example, the 2010/2011 Bucks were slightly above average in terms of what you would expect for a team with the amount of lost games they had, with 2.91 more wins than the predicted (by this measure) 32.09. Positively electrifying, isn't it? The biggest outlier in the last decade were the 2010 Timberwolves, who only had 35 games lost due to injury and therefore were "predicted" to win 45 games, but only won 15. Does that make them the worst team of the past decade? Possibly. And it makes you wonder how bad they would have been if they had been above average in injuries.

Meanwhile, the 2009 Cavaliers had 79 games lost due to injury, thus being "predicted" to only win 40 games, but they were able to  pull through with 66, making them the biggest "overachiever" of the decade in terms of injuries.The teams closest to matching predicted totals (and thus, closest to the line of the graph) were the 2004 Jazz and 2007 Celtics, with actual win totals that were within 0.03 and -0.05 of their predicted win totals, respectively. In other words, the regression would tell you they were the most perfectly average teams in the NBA when adjusting for injuries.

So, what does this all mean? Well, it's obvious that certain teams have had more trouble with injuries over the last decade than others. The question is: Is it just pure luck or is it flaws in the organization?  Teams like the Suns have gotten significant praise for their medical staff and treatment, and the numbers back that up. They've invested a lot in their players' health, and it seems they've been rewarded.  It begs the question: are teams that struggled with injuries over the last 10 years simply not investing enough time or money into treating and preventing injuries? Are they gambling unnecessarily on injury-prone players? Whatever the reason, it's clear that significant amounts of money and wins are at stake.