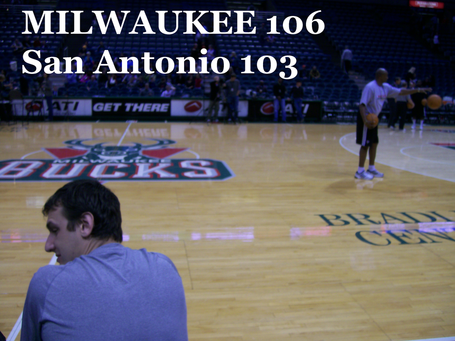 Yet the Bucks went basket-for-basket with the NBA's top-rated offensive team all the way into a hot, hot winter night in Milwaukee, as temperatures improbably drifted toward 50 fahrenheit outside and scores improbably bounced into the hundreds inside.

Stephen Jackson and Duncan traded a dozen points each in the first quarter, and Jackson never slowed in 42 minutes. In his first game since Jan. 2, Bogut was strong beginning and end, and mostly in between, starting off gaining excellent position on the first play of the game and later throwing down a couple dunks. Brandon Jennings could not stop Parker early and Parker could not stop Jennings late. Rookies were not really rookies as Jon Leuer was all sorts of Jon Leuer, Tobias Harris impressed again, and Kawhi Leonard is a player.

The short is if you came to the Bradley Center, you watched good basketball players do good basketball things. If you did not, the Bucks play 30 more regular season home games in Milwaukee, where they unequivocally never, ever lose.

And while these aren't your slightly older brother's Spurs, as they entered the game 19th in defensive efficiency, these were certainly not last week's Bucks either.

Stephen Jackson. Right when we thought it might be the right time to write off Jackson, he does this. And that, and everything else. Whether he was tossing around-the-back passes or throwing in threes, Jackson made it all work and made it look easy. While tonight was not necessarily indicative of what we can expect from Jackson on an even semi-regular basis, it showed that his first eight games might not necessarily be either.

This is the kind of game that makes you browse the box score for minutes and minutes, but to repeat: 34 points, 12-17 field goals, 3-4 three pointers, 7-7 free throws, 8 assists, 3 turnovers.

Brandon Jennings. To downplay Brandon's 11 assists simply because his teammates were making a full half (50.0 %) of their shots would be unfair for a point guard who has been surrounded by some of the most impotent offenses in NBA history.

The offense purred as Jennings blended in eight first-half assists, and in the money moments it was Jennings who took matters and the ball into his own hands, breaking down three Spurs for a sideways-running bank to go up 98-94, crossing up Tony Parker for a jumper to go up 104-101, and springing forward for a two-handed slam to finish the game 106-103. Parker had a fine night going against Jennings as well, but the fourth quarter was all Brandon's.

But the Three Bucks tonight are the three Bucks who will be counted on the most, just take a look at minutes played. And for that, this was an incredibly encouraging night.

Bogut carved out nice inside position on Milwaukee's first possession of the game, and that was really enough. But then he made the shot. The next time down, he received and finished an alley-oop from Jackson. In short, he started the game like someone who was to finish the game throwing down multiple dunks.

He admittedly had trouble chasing Tim Duncan's jumper, but made one of the most important plays of the game when he drew a charge on Duncan with the Bucks up 106-103 with 35 seconds in regulation.

Splendid return to the court for Bogut. The numbers: 14 points, 11 rebounds, 3 assists.

Also: The Bucks have only won 18 games (counting tonight) since 1985-86 in which they've grabbed fewer than 30 rebounds.

+9. To warn against reading too much into single-game differentials, Drew Gooden posted a +9, the top mark of any player on either team.

Adjustments. After all of the post-halftime blues this season, it was refreshing that after halftime, the Bucks had their five best first-half players on the court: Jennings/Delfino/Jackson/Leuer/Bogut.

The only difference from the starting lineup was replacing Leuer with Ilyasova, but that difference made a big difference. Leuer ended up playing the entire third quarter while Ilyasova sat the entire quarter, as Skiles seemed to push all of the right buttons tonight, though most of the buttons also seemed to be right buttons tonight. Leuer stayed busy scoring four and even delivering a pretty drive-and-kick for a Delfino three-pointer in the third quarter, and then Ilyasova returned to chip in 5 points, 3 rebounds, and 1 assist including a highlight corner three in the fourth quarter.

San Antonio entered the game as the fifth-ranked third quarter team in the NBA, but they only outscored Milwaukee by two in the third, and then the Bucks won the fourth 27-22.

But before you pencil Leuer into the starting lineup, know that Skiles played down a comment from a reporter about how Skiles started him to start the second half.

Skiles: It's one of the first third quarters we've actually played well, so it's definitely something we'll have to look at. But we have to be careful too though in making judgments about people when other people are out. It's very difficult to judge anybody on the team when Andrew is out. Mbah a Moute is out, Udrih is out, so we've got to be careful, but it is something we'll take a look at.

Rookies. Leuer is a keeper (see above or a Bucks game).

And even if the "he" is Danny Green or James Anderson, it is nice to be able to say about someone or someones that "he can't guard Tobias Harris." The rookie girthed his way to hoops over three different defenders tonight (also Richard Jefferson), showing off a soft touch on the rim and impressive footwork on both the offensive and defensive ends.

Skiles: Both I thought were good. Jon is always in the right place you know, seemingly at the right time. He knows what he is doing out there. Neither kid really looks like a rookie out there.

Role Reversal. Milwaukee trailed by double-digits (25-15) early and came back to win, which is bound to leave those of you who became accustomed to the team blowing double-digit leads and losing extremely uncomfortable.

Unstoppable Force Meets Slightly Movable Object. In a classic offense versus defense matchup, the Spurs (1st in offensive efficiency) scored surprisingly easily against the Bucks (11th in defensive efficiency) throughout much of the game, even with Bogut in the middle, as San Antonio shot 60.0 % overall from the field.

But Milwaukee held San Antonio to 44 in the second half, and Luc Mbah a Moute surely could have helped on Kawhi Leonard, who finished a Ginobili-like 19 points on 9-12 shooting along 4 steals off the bench.

Hurting. Luc Mbah a Moute (right knee tendinitis), Mike Dunleavy (groin), and Beno Udrih (shoulder) were out, because someone or three someones are always out. To make matters worse, old friend T.J. Ford had to be helped off the court in the first quarter and did not return.

The One And Only. Tonight marked the only matchup between the Bucks and Spurs, which is too bad because these teams tend to play compelling basketball against each other, even when it doesn't end well. Then again, considering the home/road splits, this might be for the best...