Carlos Delfino did not quite make Three Bucks, but he was the Three Buck against San Antonio.

How does Andrew Bogut fit into this picture?

Delfino made 4-6 three-pointers against the Spurs and at one point he made two straight in the second quarter, prompting a 13-1 run that gave the Bucks a 44-41 lead. His first of those two was from the right side (not corner) as shown in the shot chart. That was the same spot that Delfino was sinking threes from before the game in the video above. 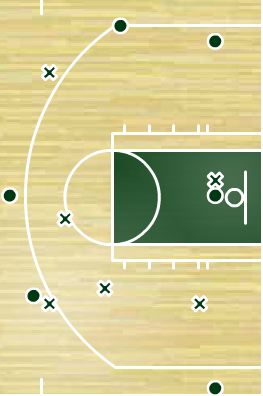 As a team the Bucks are still lagging a bit from outside overall, ranking 20th at 31.1 %, but last night's 9-14 effort will hopefully be the start of a positive long-range and long-developing trend. The Bucks were simply on against San Antonio, but Andrew Bogut's return to the court and assertive start to the game also clearly helped Milwaukee space the floor.

I checked into the numbers and found that last season, the Bucks shot more three pointers and at a lower percentage in games without Bogut. This season, the difference is even more pronounced, at least in terms of accuracy.

There are plenty of other variables to consider that contribute to swaying these numbers one way or the other, namely the injuries that have sidelined various Bucks both during and not during Bogut's time off the court. But it is plain to see that having a center, any center, opens up the outside shot. And not having Bogut sets off a rippling effect, if not a crippling effect, on the team's ability to operate successfully on offense not only in the post, but also on the perimeter.