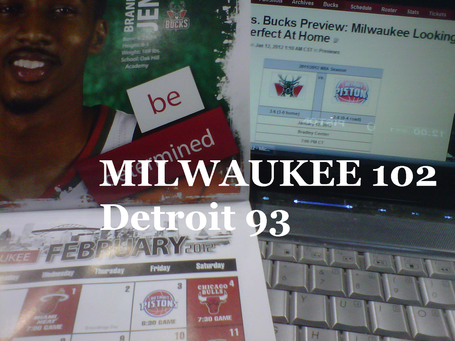 MILWAUKEE -- Even though the average Milwaukeean seems to assume that the Bucks lost yesterday, everyday, they actually have not lost a home game in 292 days and nights.

The Bucks led for all but 13 seconds against the Pistons, and this was not a glowing game by Milwaukee, but they improved to 4-0 at the Bradley Center this season, coming off three straight home wins to conclude last season. Indeed, the team has recovered well since allowing a 12-0 run to Derrick Rose and the Bulls to make joyless what was a joyful game late last March.

And so teams entering the Bradley Center (Timberwolves, Wizards, Spurs, Pistons) are a combined 1-16 on the road this season, and they are also 0-4 at the Bradley Center. You can put those clauses in any order, but it is still difficult to figure out what this means for the Bucks moving forward.

As I say, Detroit looked all the part of a team that has lost by an average of 20 points during a five game losing streak, aside from Greg Monroe. And Monroe was almost all Detroit needed, because he was so, so much Monroe. The second-year center had the finest game of his life, dominating offensively (32 points) and on the glass (16 rebounds) all the way through, seeming only to gain strength as the minutes ticked, gaining position so prime over Andrew Bogut on both ends of the court to make you look away.

But one night after racking up eight assists in the first half alone, Brandon Jennings played the role of scoring guard tonight, throwing in 27 points on a tidy 15 shots, even saving his best for last, putting away the pesky Pistons in the fourth quarter after Detroit had brought the game to within three points at 94-91 with 1:23 in regulation.

Following a running layup to make it 96-91, Jennings zipped a pass to Stephen Jackson on the perimeter who slung it back inside to Jon Leuer for a dunk to go up 98-91 with 25 seconds to go, with just the finishing touches to go. Speaking of them...

Brandon Jennings. Never bashful about taking clutch shots despite spotty success in the clutch during his first two seasons, Jennings has made a habit of high-scoring fourth quarters already this season, and lately the efficiency is catching up too. Forget for a minute or forever that the Bucks even needed a bit of clutch play to close out the Pistons -- Jennings closed out the Pistons. In the final 1:08 of regulation, Jennings broke down the defense for a driving, banking, floater to give the Bucks a 96-91 lead, hockey-assisted Jon Leuer's dunk to go up 98-91, and coolly swished four straight free throws.

Stephen Jackson: We've got a great closer in B.J., and he knows, he is starting to figure that it is his role, to close games for us. And he did a great job of knocking his free throws down and made a big layup down the stretch.

Stephen Jackson. Poured out six turnovers overall, but poured in 18 second-half points and was at his best in the third quarter when he scored 10 points, made both of his three-point attempts, dished out three assists, and collected two steals. That is what it takes for the Bucks to win a third quarter (27-25).

We are talking and writing about 25 points, 6 rebounds, 6 assists, 3 steals, and 1 technical.

He began the night slinging in a nice pass to Andrew Bogut for a layup on the first offensive possession of the game, and the rookie followed that up with a layup of his own and jumper on the next two times down the court, not a butterfly in sight during his first NBA start. He continued to show off court awareness beyond his years, and continued to recognize his own limits, which are becoming fewer and fewer the more we don't see them.

Almost shocking that this is almost not surprising: 15 points on 6-9 shooting, 6 rebounds, 5 assists, 2 blocks, and 0 turnovers in 31 minutes.

41-41. Normally I try to highlight stats that won't get play elsewhere, but the fact that Detroit and Milwaukee combined to make 41-41 free throws both is just too impressive and anomalous to not mention. Entering the game, Detroit ranked seventh in the NBA making 77.8 % and Milwaukee was 16th at 74.0 %, but Detroit shot 24-24 and Milwaukee made 17-17.

For Three To Won. Another game with Bogut in the middle, another cracking three-point shooting night, as the Bucks made 11-22 from long range, led by a 3-4 night from Brandon Jennings and a 2-3 effort from Ersan Ilyasova.

Hope Restored. It is only 10 games, but it is also already mid-January. With more than 15 % of the season in the books, the Bucks (4-6) have escaped a disastrous start, a backhanded compliment, sure, but important nevertheless considering how injuries have cruelly plagued them so once again and considering how the 0-5 road trip seemed to send the season spinning out of sorts just days ago. If snagging a playoff spot this year is the hope -- and it is either that or aiming for the aforementioned disaster and a high draft pick -- the Bucks are currently a game out of the final spot and look sort of like playoff contenders look. Now about home court advantage...

Pistons Undone. Despite neither team being particularly distinguished over the past few seasons overall, the Bucks had conspicuously dropped 14 of their last 19 games against the Pistons, including three out of four last season. But Detroit looked pretty much conquered from the outset.

Thinning. For a team known first for its defense and second for its depth, the Bucks gave up 50 points in the second half to what came in as a truly wretched Pistons offense (29th in offensive efficiency), and they relied almost exclusively on seven players against the Pistons, even in the face of said shaky times, even as the coach described his players as fatigued after the first question in the post-game presser.

Scott Skiles: In most of these games though, around the league, and it happened again tonight, there are moments of the game out there where you see 10 totally fatigued players on the floor out there. And there were several moments like that tonight. A lot of these games are won by the team with that has the most energy, and at least we were able to build a lead.

And Drew. Greg Monroe was calling for the ball in the fourth quarter with Andrew Bogut defending, and he was scoring. Monroe capped a dominant 32-point, 16-rebound night with 12 points in the fourth quarter to keep the pressure on the Bucks until the closing moments. Worrying not only was the defense, but also Bogut's rebounding, or lack thereof (4 rebounds compared to 16 for Monroe) and general lack of spryness.

Offensive players are semi-frequently afforded "off" nights, and Bogut virtually is never off (only occasionally mismatched) defensively, so he gets a pass here. And going through emotionally trying time combined with a long flight to and from Australia and then two games in three nights is a recipe for an exhausted body.

Didn't get the chance to talk to Andrew after the game -- just sincerely hope nothing physically or emotionally is bothering him much.

Monroe is in the division so this matchup will be re-visited many more times -- in fact, Detroit is back in Milwaukee on Jan. 30.

On The Road. The Bucks have not yet moved all games to Milwaukee, a troubling development on many levels. As such, they travel to Dallas to take on the defending champions on no rest tomorrow evening. They won last time in Dallas, but...