Milwaukee Bucks Offense: Stephen Jackson Is Shooting From Where?

Share All sharing options for: Milwaukee Bucks Offense: Stephen Jackson Is Shooting From Where?

The 2011-12 Milwaukee Bucks have a lot riding on Stephen Jackson, but the veteran shooting guard hasn't exactly answered the call so far this season. Sure his 34-point explosion against the San Antonio Spurs offered fans some hope, but stinkers against the Utah Jazz and LA Clippers more than cancelled it out in terms of value. His early play may have inspired some fans to fantasize about sending him out of town after gracing him with that old EA Sports saying (link very NSFW), but in reality it is time to make the best of the situation and find some place in our minds to rationalize the team's reliance on the aging Jackson for offense. Heck, he has been downright good in the last few games if you can overlook some turnovers. Anyways, this feature is meant to (a) inform us on to what to yell at our televisions when Jackson touches the ball and/or (b) help us find situations and floor locations where he is most dangerous. A shot-by-shot analysis of Stephen Jackson's first 11 games with the Milwaukee Bucks lies beyond the jump...

The method for my analysis is simple. I have collected the shot charts for each game so far this season, broken the court into three regions classified relative to someone facing the basket (left, middle, right) and calculated Jackson's shooting percentages for each area. My scouting eye has led me to believe that Jackson is better suited for catches on the left side of the hoop, so here is my exploration of that hypothesis. Teams have been heavily shading S-Jax to the corner when he catches on the right side during most games this season, and I feel his lack of a strong left hand (despite some occasional one-dribble moves with that hand) makes him fairly predictable and easier to defend on the right side of the basket. On the left he can use his dominant hand to attack the middle of the court and open up more options for the offense while also making it more difficult for the defense to trap him. It makes sense to me, but does it actually bear out in the numbers? Let's take a closer look and find out if I'm completely full of it.

(1) All shot charts come from CBS Sports, but I have modified them to reflect the game stats and the desire floor regions.

(2) CBS generally lumps all shots within approximately six feet of the basket in a single homogenized region under the hoop in their shot charts. Don't expect precision for close attempts when looking at the charts.

(3) I actually like the fact that CBS just clumps close attempts under the basket for the purposes of this exercise, because it focuses attention on the mid-range and outside shooting. Aside from close shots otherwise making the region analysis very messy, I think any shot within 6 feet is a good thing, regardless of which region it might land in. In other words, close shots are protected and isolated under this format so we can focus on how floor location might affect jump shooting.

Now let's take a look at the Stephen Jackson shooting charts for the first 11 games: 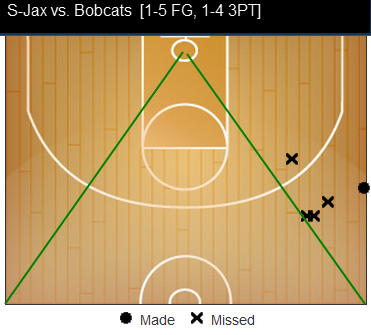 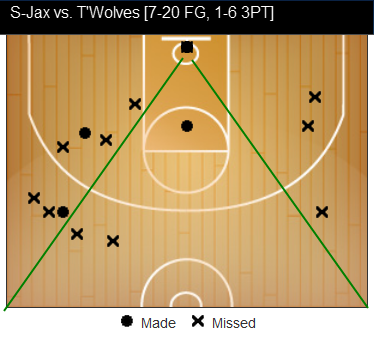 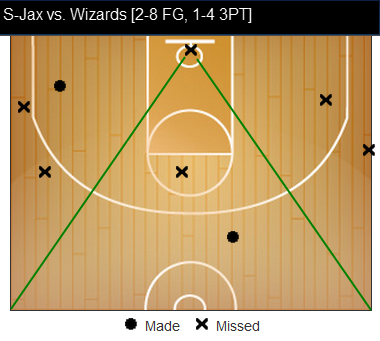 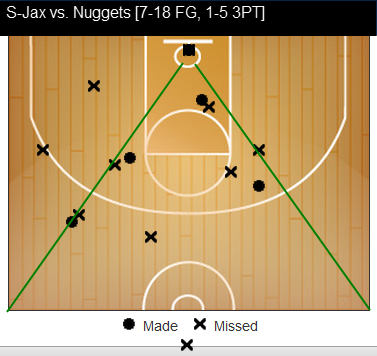 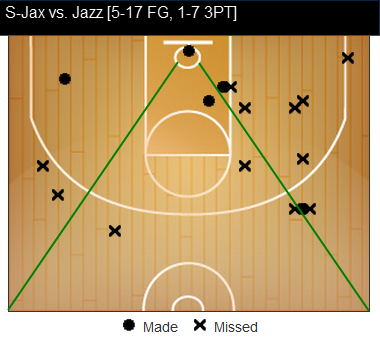 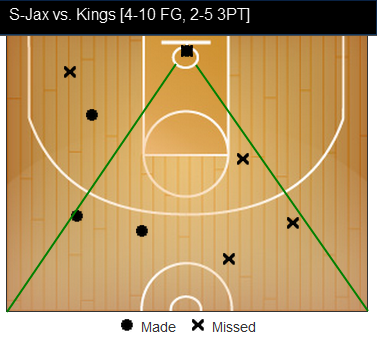 *Note: There are two made 3PT shots in the right corner that got cut off 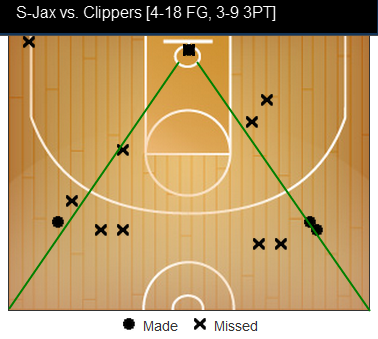 Note: One 2PT miss on the right side is not marked 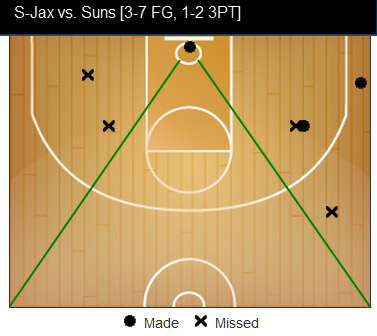 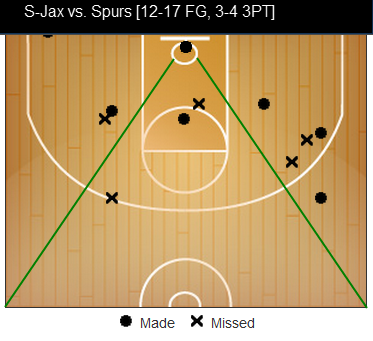 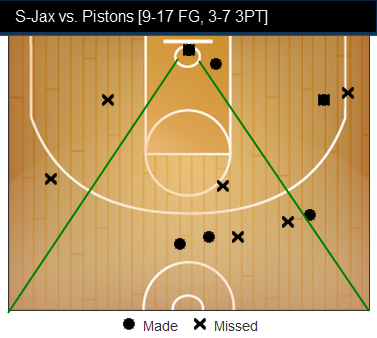 Note: Two made 2PT Right baskets are not marked 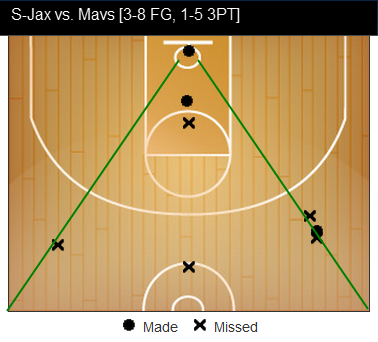 Now take a look at my analysis of those shots:

Impressions: The season is young, and the sample sizes are small, but there are some interesting trends emerging. I immediately looked at the difference between the right and left sides on two-point jumpers, and at the moment it appears my scouting eye has served me well. When operating on the right side of the court, Jackson has struggled mightily, shooting 29.2% on 24 shot attempts, while he shoots his best percentages inside the arc from the left and middle zones where he has more space to operate using his right hand (40% shooting from both zones on a combined 35 shot attempts). However, when Jackson avoids dribble-drives on the right he hits a very nice percentage from long-distance, so perhaps his best role from that region would be as a weak-side spot-up shooter waiting for the skip pass during pick-and-roll situations or pinch-post isos with Andrew Bogut.

If he can get to the paint on his drives, S-Jax's length and strength serve him well. He has converted 62.1% of his shots within approximately six feet of the rim through 11 games, so as long as he doesn't abandon his dribble-drives for mid-range jumpers he might actually get that overall shooting percentage up to a level that justifies his central role on the Bucks' offense.

This analysis will continue throughout the season, and I will start to incorporate different splits as the year rolls on, but this should give you a pretty good idea of how Stephen Jackson has managed to produce his points and misses in 2011-12.

The two biggest contributors on the Bucks offense have been, and likely will continue to be, Stephen Jackson and Brandon Jennings. Therefore, you can expect me to take a look at Brandon Jennings in the very near future and follow up on both players with this analysis until the Bucks win the NBA Championship or the season ends in some less satisfying fashion.

If you see anything in the charts or in the data that strikes you in any way, please feel free to pass along your own observations and/or reactions in the comments.