Share All sharing options for: Nuggets 105, Bucks 95: A Denver Flyby Over Milwaukee

But as fast as Jennings finished, he could not catch the Bucks up to how fast the Nuggets started, who started so fast they went back in time to 1983. So a couple weeks after losing to the Nuggets, the Bucks lost to the Nuggets again.
The Nuggets moved the ball as quickly as they received it, played up-tempo, attractive basketball, without a single star, without key players, and received a balanced night from the starters (four players with 11+ points, none with more than 14 points) and boasted impressive depth off the bench (Andre Miller with 11 assists, Corey Brewers with 22 points, Al Harrington with 16 points, Chris Anderson with defense). In essence, the Nuggets were exactly what we want the Bucks to be.

And while the Bucks resemble last season's Nuggets in at least one way -- no team in the NBA had such a dramatic home/road split as the Nuggets, who went 33-8 at home and 17-24 on the road -- they proved fallible even at home tonight. And so there are not just problems on the road anymore. Home, road. Defense, offense. Now there are a few problems almost everywhere.

Brandon Jennings. Overall, 30 points on 13-22 shooting and 3-6 three pointers along with 6 assists, 3 steals, and 1 block -- in a game that early on Ty Lawson seemed to have a firm grip on.

Another intrepid fourth quarter from Jennings, who almost impossibly and almost single-left-handedly made a game of it. He netted 12 invigorating fourth quarter points, and his shot distribution in the final 12 minutes was an ideal mix of three-pointers and shots around the rim. Bravo. 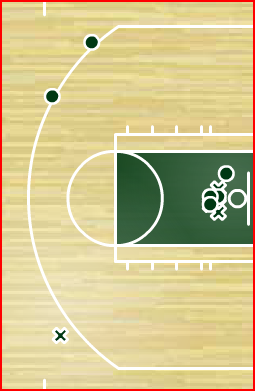 That shot chart reminded me of what Scott Skiles said pre-game, when talking about Denver's successful offense.

Skiles: The percentages league-wide show that is where you normally win games, at the rim and behind the line.

Tobias Harris. Harris got the surprise start tonight. Second half start, that is. With Stephen Jackson wholly ineffective in the first half, Harris joined the first five to start the third quarter, and suddenly the Bucks looked a bit renewed. Tobias started with a defensive board, continued with an alley-oop dunk, and helped Milwaukee win the third quarter 23-22. His line reflects a busy night: 14 points on 5-10 shooting, 4-4 from the line, 8 rebounds (5 offensive), 3 assists, and 1 steal.

Ersan Ilyasova. With Nuggets flying about, Ilyasova was one of the few Bucks to match the energy of the visitors in the first half, eventually tipping his way to 6 offensive rebounds and 11 rebounds overall, most since last February. Added 9 points and 2 blocks, and was more than just out there.

23-18. The first observation that even the most casual basketball fan would make after watching the game tonight is that the Nuggets burned the Bucks in transition. And to a certain degree, they certainly did. But you might be surprised to see that in the end, the Bucks actually scored 23 fastbreak points (10-11 shooting) compared to 18 fastbreak points (6-11 shooting) for the Nuggets. The issue was that Denver was essentially fastbreaking even after Milwaukee scored.

27. Denver ranked first in the NBA averaging 24 assists per game entering the game. They did that three better, finishing with 27 assists against Milwaukee.

Refreshing Prince. Before the game, Scott Skiles said that Luc Mbah a Moute had the green light to play, but that he didn't foresee playing him more than 10 minutes (if at all) since he had just been cleared to play. Although he did not play, tonight made it all the more evident that the Bucks need him.

Done With Denver. No more Nuggets! The Bucks lost two weeks ago in Denver and then lost by some more tonight in Milwaukee.

Jackson Off. Perhaps more than anyone, Stephen Jackson (20.5 points on 48.4 % shooting at home, 11.8 points on 31.8 % shooting on road) had exemplified Milwaukee's home/away basketball bipolarity entering this game, but he spent the first half evening out those numbers and spent the second half on the bench.

The entire second half.

After shooting 0-6 and scoring 2 points 16 minutes in the first half, Scott Skiles did not insert Jackson back into the game, prompting a lively postgame chat from Jackson.

Jackson: We just ain't playing well. We don't have an identity right now. We really don't know where to be on offense. But if they want to single me out, fine, it's my fault. It's my fault. I'll take the blame.

Defense. While the sputtering offense has rightly been an object of disdain for Bucks fans this season, the inconsistencies on defense are even more troubling. Although the team still struggles on offense, they entered tonight ranked 22nd in offensive efficiency, a legitimate improvement on last year's 30th ranked outfit. But they came into the game 17th in defensive efficiency, and then watched the Nuggets put up 63 points in the first half.

The guards are not shutting off driving lanes, the posts are not picking up the slack, and no one is getting back in transition fast enough.

Tired Of Losing. Andrew Bogut played a season-high 41 minutes yesterday in Philadelphia, and while it was yesterday and not last night, that is still quite a lot of minutes. If the Bucks would have capitalized on Bogut's ace game against the 76ers, then a heavy-legged night by Bogut and company would have been frustrating to watch but easier to handle. Instead, a three-game losing streak.