Share All sharing options for: Hawks 97, Bucks 92: Three Not A Magic Number 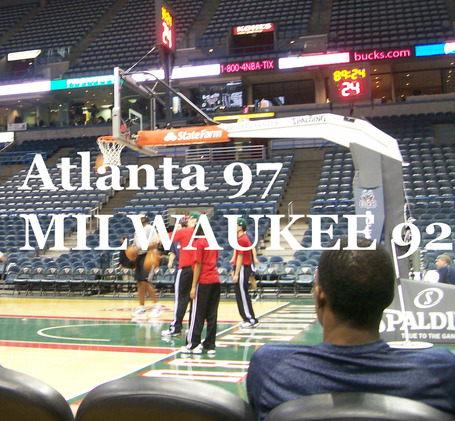 MILWAUKEE -- Three. It's a tragic number.

The Bucks actually won the fourth quarter, 28-27, and that is an ever-important preface to everyone focusing on the final 12 minutes rather than the first 36 (which the Bucks lost 70-64). But with both Andrew Bogut and Luc Mbah a Moute glued to the bench for the entire fourth quarter, the Hawks also shot 46.7 % from the field, made 12-13 free throws, and scored all of their 27 points in the halfcourt in the final period.

Indeed, Scott Skiles stuck with Jennings/Jackson/Dunleavy/Ilyasova/Gooden for the entire fourth quarter, and while things looked peachy when Gooden drained a corner three to tie it at 88-88, Josh Smith (three to go up 91-88) and Joe Johnson (14 points in fourth quarter) closed out the Bucks in an odd final period, lowlighted by Stephen Jackson's completely blank stat line (except one foul) and Mike Dunleavy's three missed three-pointers and late turnover.

And so after winning two in a row on the road, the Bucks have now also dropped two in a row at home, once again canceling out the ups with the downs.

Brandon Jennings. Added 7 points and 4 assists in the final 12 minutes while shutting out opposing point man Jeff Teague. But the fourth quarter maestro was not able to get to the line this time, and ultimately ceded fourth quarter heroics to Joe Johnson. Still, he led the team in points with 21, had one or two hands in passing lanes all night (2 steal and 2 blocks), circled through the paint with some purpose, finished a right-handed layup, and tied a season-high with 11 assists despite an off-and-on supporting cast.

Ersan Ilyasova. At his tipping best, Ilyasova went down, but with lots of fight. He pulled down 5 offensive rebounds, got to the line more than anyone (though he uncharacteristically made just 4-7 at the stripe), drew a charge, picked up 2 steals, finished with 11 rebounds overall, did not turn the ball over in 27 minutes, and while it seems like they should not, somehow these nice numbers did manage to sum up most of his game tonight.

0-1. Stephen Jackson entered tonight with a higher usage rate than Joe Johnson, and he finished the night shooting 0-1 for 0 points in 27 passive minutes. Meanwhile, Johnson shot 10-22 for 28 points, including 14 in the fourth quarter.

23.0 %. Dunleavy chipped in 17 points overall and 8 points in the fourth quarter, but he missed all three of his outside attempts in the final frame, and the 36.0 % career three-point shooter is down to 23.0 % from deep this season.

Brand-On. For the second night in a row, Jennings managed to contribute (21 points, 5 rebounds, 11 assists, 2 steals, 2 blocks) despite an uneven touch from the field (9-22).

Jennings to Bogut. A perfectly weighted Jennings pass reached a perfectly timed Bogut jump for a perfect bit of alley-oop congruity in the second quarter. Video when available.

Back-to-Lack. Even with relatively even distribution of minutes, and full health, the Bucks fell for the fourth straight time on the second night of a back-to-back, following the home-opening win against the Timberwolves. They have 16 more back-to-backs this season (starting with the Bulls on road and Lakers at home this weekend), which means they either have a lot of time to figure this out or they have a lot of time to not figure this out.

Houston, They Have a Problem. The Bucks have won two in a row on the road, but they have lost 11 in a row in Houston, where they visit on Wednesday.

Lost. With the loss, the Bucks are ninth in East and 4.5 games behind the Magic for the sixth spot. Sneaking their way into the final playoff spot still seems possible, but there does not appear to be room to reach any higher, with the Celtics currently occupying seventh place. And so the team is caught in a middlest of middle grounds.

That is familiar territory, but what makes this an even more difficult and distressing situation is that, with a full complement of players, promising youngsters Tobias Harris, Jon Leuer, and Larry Sanders did not play a minute tonight.