During the Milwaukee Bucks' 97-92 home loss to the Atlanta Hawks, a late three by Josh Smith broke an 88-88 tie with less than one minute remaining and put the Hawks up for good. While most of the focus post-game turned to Scott Skiles' wacky decision to abstain from substitution in the final quarter, this defensive possession featured a terrible breakdown in pick-and-roll defense. It might generally be acceptable to let Josh Smith take a three pointer in the late game situation, there is no way the decision was defensible in this scenario. Not only was Smith wide-open and comfortable taking the shot, Jeff Teague passed up his own wide open three-point attempts in favor of the assist to Smith. How is it that no Bucks defender came within 10 feet of Teague and J-Smoove on such an important play? Let's take a closer look...

Veteran guard Stephen Jackson focused on his defensive role on Monday night, taking only one shot and committing zero turnovers for the first time since December of 2010. He did a fine job bothering Joe Johnson, but couldn't prevent him from scoring 14 fourth-quarter points. With Johnson getting what he wanted, the Hawks went to 2-1 pick-and-roll with Johnson and Jeff Teague, isolating Jackson and Brandon Jennings on defense. It looked like the two Bucks defenders tried to work something out in their approach when the offensive strategy crystallized, but as Skiles said after the game "we had a breakdown there." 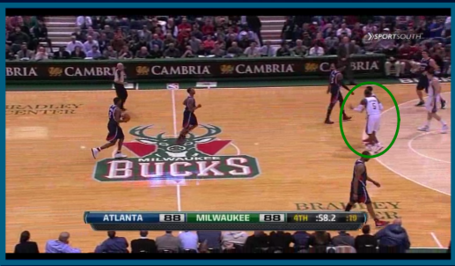 From there, Teague bluffed the screen on Jackson's right hip and quickly reset on the opposite side. Jennings overreacted to the bluff and hedged to his left, forcing a late recover to the pick-and-roll action on the other side of the play. 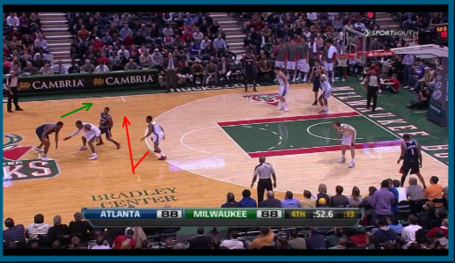 Doing his best to recover and make the proper hedge, Jennings left enough room for Johnson to split the show and force both defenders to follow behind him as he made a move towards the paint unimpeded. 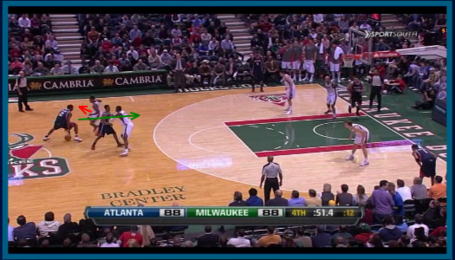 As Jennings gets behind the play, Teague sets another screen on Jackson to provide Joe Johnson with the angle and then pops to the top of the key to space the offense properly. 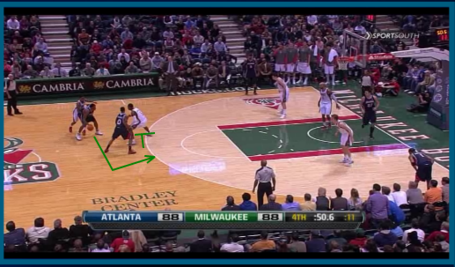 S-Jax fights hard through the Teague screen and somehow gets in position to cut off Johnson at the right elbow, but Jennings followed the ball as well and left Teague alone on the arc. 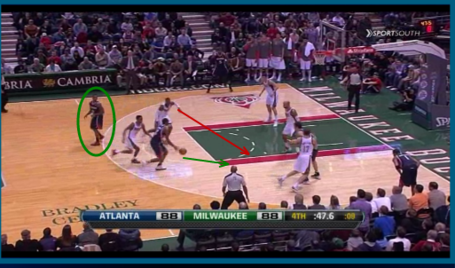 From here Johnson kept the defense committed to him by rising for a faux shot attempt and quickly reversing the ball to a wide open Teague. I estimate the nearest defender is 15 feet away, which is a completely unacceptable outcome from the S-Jax-Jennings duo on defense. 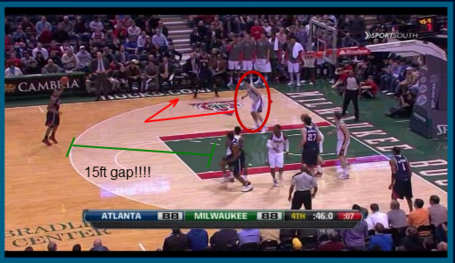 The bumbled pick-and-roll defense leave Ersan Ilyasova in what I like to call Screwed City. He has to make a rotation on Teague to force a decision, while trying to stay in some type of position to bother Smith in the corner. Good offensive spacing on the secondary action prevents Ersan from doing either, and neither Jennings nor Jackson made a serious effort to recover to the weak side of the play. 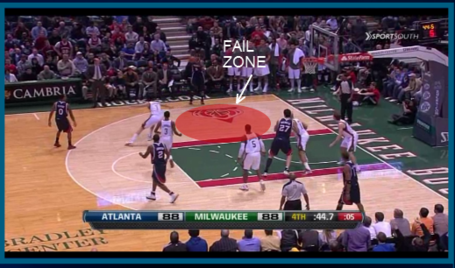 From there Smith hit the three to put the Hawks up 91-88 with 41.9 seconds left, and they never looked back. The Bucks had to play chase and foul and Johnson sealed the game at the line. I, for one, found it to be the biggest play of the game. Unfortunately, the Bucks didn't exactly show off any defensive discipline on the play and got burned.