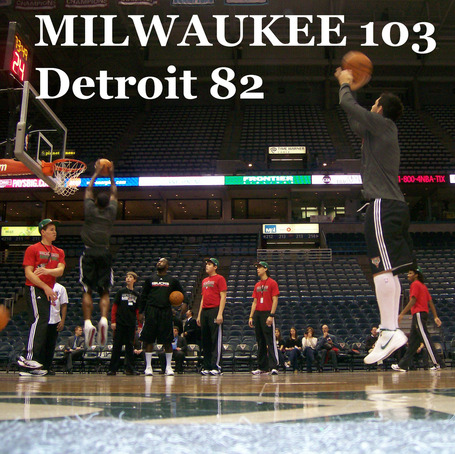 But if we are comparing wins, at this point? No one loses.

The Pistons might be worse than their record indicates. And now their record is 4-18. After the first quarter, the Bucks up 30-16, that was the lede of this story. But then the Bucks put up 56 points in the second half and blew Detroit back to Detroit, or New York, or wherever they are headed next.

Detroit did not simply make Milwaukee look good though -- no one ever seems to. The Bucks just were good, early and late, as Brandon Jennings reached past the 20-point plateau after just one game under. And while Drew Gooden did not quite play Greg Monroe to a draw, they both scored 16 points, Mike Dunleavy spun in 20 off the bench, and the Bucks made it two in a row without Andrew Bogut (or Stephen Jackson, who is becoming parenthetical).

So, no Andrew Bogut, no problem? No, not really. This was an imperfect performance, but a perfectly acceptable one. And while the more we learn the less we seem to really know, there is something oddly compelling about that ongoing dichotomy.

Mike Dunleavy. Arrived at the game shooting a career-low 26.3 % on threes, and then put the game away by scoring half (10) of his season-high 20 points in the fourth quarter, highlighted by a couple triples. The starting point guard enjoyed the show.

Brandon Jennings: He's coming off those screens so fast, and he's just launching it. And you know, he's got that pretty rotation on everything and it's just going right in. Every time he shoots it I just look at the spin, and it's just spinning and spinning, and it just drops in.

Brandon Jennings. Dropped in 21 points of his own, and looks so much more comfortable out there sharing so much court time with ballhandlers and passers like Shaun Livingston and Beno Udrih. Jennings hit spot-up threes and threes off the dribble, giving life to the Bradley Center on each of his four three-pointers -- after each one he was genuinely excited, and after each one of these games you can be genuinely excited too.

Beno Udrih. Only scored 1 of the 103 points, but along with Dunleavy, played the entire fourth quarter, during which time he dished out four assists. Udrih started the season in the mold of the scoring backup point guard we expected, notching 13, 8, and 8 points over the first three games. But of late, he is becoming a real distributor off the bench, racking up assists at a prodigious rate -- he now has 24 assists and 3 turnovers over the last four games.

40-18. Detroit entered the game allowing opponents to shoot 66.7 % at the rim, bad enough for third worst in the NBA. Yet the Bucks were outscored 40-18 in the paint.

23/24. In all, 23 of the 24 active players on both teams played tonight. Stephen Jackson was the only exception.

All The Way. The Bucks labored a bit in the second quarter and there were shaky moments -- but they led each and every one of the 48 minutes.

Good &. In the game immediately following my story and poll regarding possibilities for the team's ideal starting lineup, Andrew Bogut suffered a broken ankle, thereby eliminating all of the outlined options.

One of the main points that I tried to stress in the article was that Drew Gooden has played far, far better at his more natural power forward position than at center since in Milwaukee. And while overall numbers and logic still back that up, Gooden and the Bucks have improbably and undeniably excelled over the past couple games with Gooden starting at center, a testament both to Gooden's quality play as well as a positive reflection on the rotating cast of forwards around him.

Next. The Bucks get to play the Pistons (in Detroit) on Friday...

Next. Unfortunately, the next two home games are against the Heat (Wednesday) and Bulls (Saturday).

Bored With Boards. Under Scott Skiles, the Bucks have historically been a strong rebounding team, and a strong defensive rebounding team. Last season, they ranked 8th in defensive rebounding percentage, the year before that, 4th. This year, however, they had fallen all the way to 27th entering tonight. Granted, Andrew Bogut has been out for a good (bad) portion of the season, but that is the world we live in.

Tonight, Detroit hauled in 13 offensive rebounds in the first half alone, and while they failed to convert many of those extra chances (5-15 shooting on second chance points overall), other teams will not be so forgiving.

I'm Sorry, Mr. Jackson. After the game, Stephen Jackson was asked if this was the first time he had not played at all in an NBA game, and he said yes. He said plenty of other things too.

Stephen Jackson: "I ain't surprised. They know how I feel. It ain't no secret. Everybody knows the situation, I'm going to cheer the team on and do what I've got to do."

And this will all be scrutinized, particularly as reports emerge that Dwight Howard wants to play with Jackson.

But what I saw after the game in the locker room was Jackson sharing light conversation and laughs with Brandon Jennings, whose locker is just one away from Jackson's.

The Bucks are 3-0 without Jackson, Skiles is finding the right combinations, and Jennings is playing the best ball of his life. Jackson cannot be thrilled, but as he likes to say, he is handling the situation like a professional. Like Scott Skiles, Jackson has a strong personality and strong opinions, but ultimately, they both operate in the best interest of their team. And ultimately, they both seem to be promoting and supporting Jennings, which is more important than anything else. So while this is obviously not an ideal situation, it also does not appear that it absolutely must be a destructive one either.