When Oklahoma City Thunder star Kevin Durant was asked back in 2010 to name which NBA defenders presented the toughest challenge for him, Milwaukee Bucks forward Luc Mbah a Moute made the list along with Ron Artest (AKA - Metta World Peace). My guess is that if someone asked Durant that same question today, LRMAM would still be mentioned first. The Bucks' ace wing defender certainly deserves that degree of respect from Durant, and this became quite clear during my look into the defensive on-court numbers for the matchup.

LRMAM is cerebral defender who implements a specific approach against each player he faces on the floor. In 2011, The Prince provided ESPN with scouting reports on several big-name scorers in the NBA, including Durant, and here is part of what he had to say about holding down OKC's top man (more is included in the infographic below):

"He wants to get to certain spots on the floor. But if you body him up, you can wear him down. At the end of the game, it shows, because he's a guy that's going to live by the jump shot."

That last line hit me hard. Did LRMAM call the (now) three-time NBA scoring champion "a guy that's going to live by the jump shot?" The label felt a tad pejorative at first glance, but it turns out LRMAM's statement is spot-on in every respect. Durant does in fact shoot more often from the outside at the game goes on, and over at the VORPed Blog they confirmed it with a breakdown of shooting locations for the Durantula comparing first-quarter and fourth-quarter shot selection for the 2011-12 season. 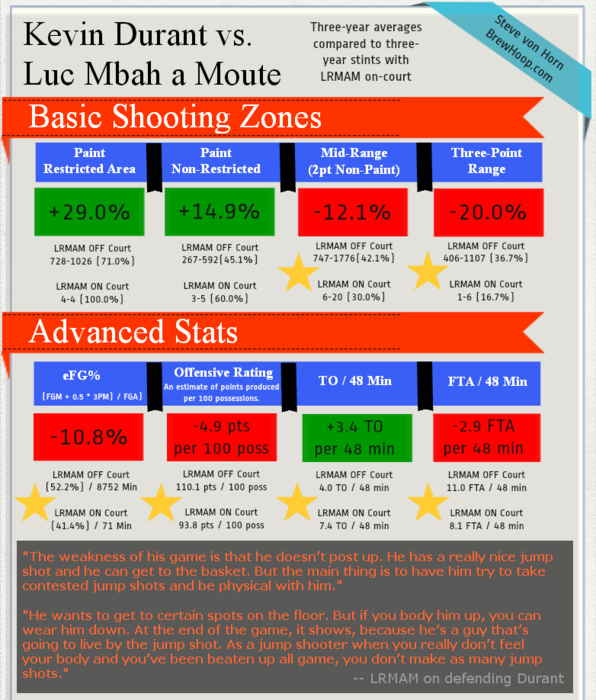