The first post in a recurring series where we take an in-depth look at Milwaukee Bucks lineup combinations. Larry Sanders and Ekpe Udoh have something special going on defense, but are Monta Ellis and Brandon Jennings working well together on offense?

This season I will look at how different Milwaukee Bucks lineup combinations fare on the floor, and the initial look only covers the first five games of 2012-13. Normal sample size caveats not only apply, they deserve to be amplified. Nevertheless, these stats do help describe what has actually happened so far, and where the Bucks are gaining advantages or losing battles against opponents.

The short story through five games is this: The Starters (Brandon Jennings, Monta Ellis, Tobias Harris, Ersan Ilyasova, Samuel Dalembert) have been terrible as a five man-unit. The Bench Mob (Beno Udrih, Marquis Daniels, Mike Dunleavy, Ekpe Udoh, Larry Sanders) has played a spectacular brand of defensive basketball. If you've enjoyed the Bucks' start to the season, you are in love with the reserves -- whether you know it or not.

"You almost have to admire the - I can only describe it as the political zen of this man, where the past is always an illusion, and the lying bull[stuff] you say in this perfect moment is all that matters." - Bill Maher on Mitt Romney

There are two reason I chose to lead my discussion of the longer, stat-filled story with that quote.

(1) The sample sizes for all lineups are small after five games, so this might be "lying bull[stuff]" said in a perfect moment.

(2) Maher is unabashedly partisan, and in this case I have to admit that I am partisan as well. In the past few years I've been hard on the group that currently starts for Milwaukee. I've expressed my frustration with Jennings on multiple occassions, suggested Monta Ellis is more flash than substance, predicted that Tobias Harris is ill-suited to stand in the corner and space the floor with the starters, and explained why Ersan Ilyasova will struggle to recapture his 2011-12 season.

Over that same span, I've gushed about the current Bench Mob. I praised Beno Udrih for the little things (and the special things), urged you to get excited about Mike Dunleavy when he signed in 2010, labeled Ekpe Udoh the best player the Bucks received in their trade with the Warriors and gushed about Larry Sanders before the season (and demanded he start rebounding during the summer).

So I can't even pretend to be a neutral observer in this discussion. In any case, here's my perfect moment and here's my bull[stuff'].

At the outset of the season I declared Larry Sanders, Ekpe Udoh and John Henson to be the Wacky Waving Inflatable Arm Flailing Tube Men. Henson hasn't seen the court much, but the other two Tube Men have officially arrived on the scene as a forceful defensive combination the league (more on this will be forthcoming). The Bench Mob has posted a Defensive Rating of 66.1 points allowed per 100 possessions, which is insanely good, and Udoh and Sanders are the reason why that has happened.

Udoh's superior positioning and anticipation, along with Sanders' energy and freakish length, have helped limit opponents to 5-of-14 shooting (35.7%) in the paint. Opponents shot 11-for-34 from the field (32.4%) over the first 20 minutes the Udrih-Daniels-Dunleavy-Udoh-Sanders quintet played. How good is that defensive performance? The Bench Mob posted slightly below-average offensive numbers (97.0 Offensive Rating) and still outscored opposing units by a margin of 30.9 pts / 100 possessions!

The Tube Men are here, and NBA offenses should be scared.

The starters have put the Bucks in some big holes so far this season. The problems have emerged on offense and on defense. In contrast to the Bench Mob, the starting five have been outscored by opposing units by a margin of 30.2 pts / 100 possessions. That's a blowout loss pace of play.

On offense, the starters are playing at a slower pace than the bench and producing an inferior TS% (44.4% vs. 57.0%). Jennings and Ellis still don't feel like a good fit on offense, as they haven't found a way to play off each other, while Ilyasova and Harris aren't really stretching the floor to create better angles for penetration.

These numbers will change for both units -- the trends will recede from the extremes -- but if you want to see more side-by-side comparisons just take a look at the stats I've compiled below (note: statistical support provided by NBA.com/stats): 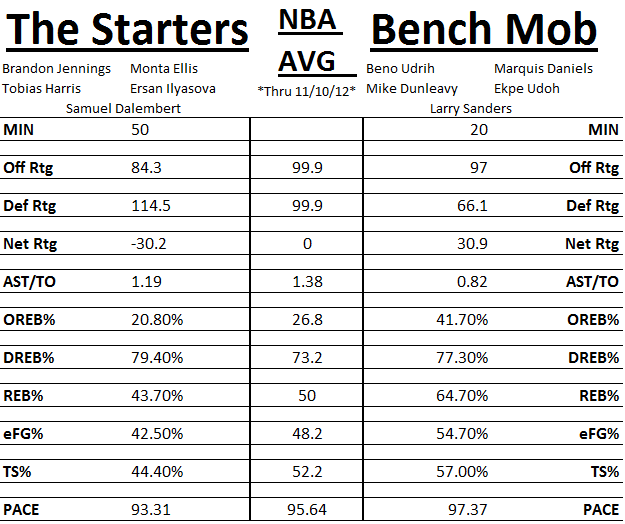 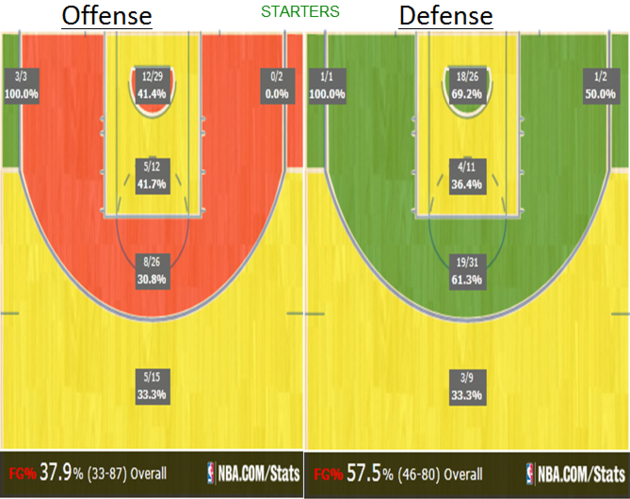 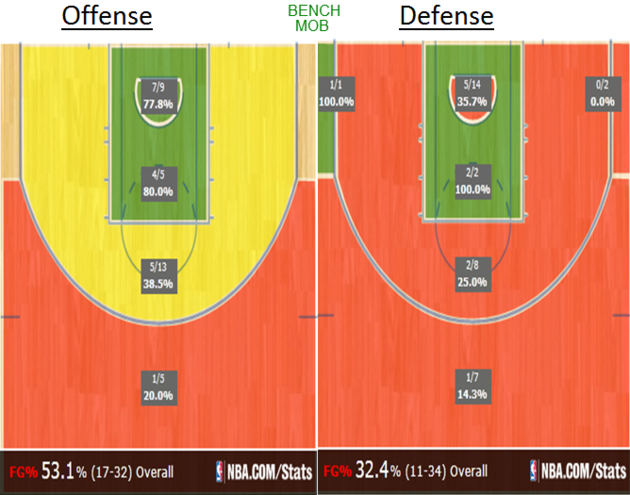