The Bucks started hot and the Pacers didn't look ready to play on Wednesday night, propelling the Bucks to a fifth win in seven games.

Wednesday night's game was competitive for a grand total of about five minutes, but don't mistake that observation for a complaint.

The Bucks picked up where they left off after Monday's road in Philly while the Pacers looked wholly unprepared to play basketball, as Milwaukee streaked to a 33-17 lead after one quarter and a 26-point lead at halftime. Fourth quarter indifference and Tyler Hansbrough's garbage time hustle were the only reason the Pacers got to within 14 at the final buzzer, and the Bucks didn't need a big night from anyone to roll to their fifth win in seven games.Brandon Jennings (on 12 shots) and Monta Ellis (on 15 shots) each dropped 16 points to lead Milwaukee in the scoring column, though Sam Dalembert (14 points, 6 rebs, 18 min) and Tobias Harris (11 pts in 20 minutes) were Milwaukee's most efficient contributors as the Bucks starters were excellent for the second straight game.

The same can't be said of the Pacers, who dropped to 3-6 and looked out of ideas offensively; Paul George was the only member of the Indy starting five to crack double digits, not that shooting 5/17 from the field should be confused for an accomplishment. Offensive ineptitude has become a recurring theme for Frank Vogel's team lately as it looks for answers to Danny Granger's absence, though watching the Pacers aimlessly crank up jump shots suggests there's much more to the issue than missing Granger. They're no doubt much better than they showed on Wednesday, but with Granger out for three months they need to come up with some ideas sooner rather than later.

Comments of the night:

How uncompetitive was this game? 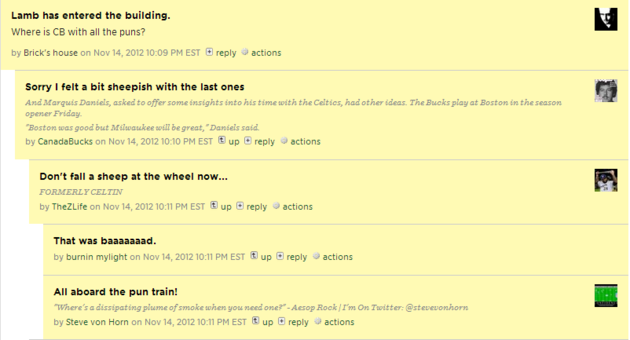