The Milwaukee Bucks (6-2) are off to their best start since the 2001-02 NBA season, but which players have truly been making the difference?

The Milwaukee Bucks are off to their best start in over a decade, and soon everyone will be searching to discover which players are truly behind the early surge. Every player on the active roster can lay claim to some portion of the overall success -- you can't build a solid foundation without some bricks, so thanks go out to Ersan Ilyasova on that front -- but where are the best and worst parts of the team emerging after a few weeks in the 2012-13 NBA season?

Brandon Jennings leads the team in PER (22.4), Monta Ellis holds the top spot in points per game (20.3), Larry Sanders is the top rebounder (8.3 per game), but it's quite possible that Mike Dunleavy is king of the court for the Milwaukee Bucks through eight games.

Dunleavy (read: Funleavy) has played the third-most minutes behind Jennings and Ellis, yet he owns a sparkling 63.2% True Shooting Percentage and he's shooting a blistering 54.5% on threes to pace the squad. Throw in six rebounds per game and roughly three assists, and suddenly you've got one of the top performers on the Bucks. He's refined, reinvigorated and really damn good at basketball. Let's take a close look at the entire team and see what we can see in my first Lineups Pyramid feature.

There are a lot of stats basketball stats floating around, but I've found that people tend to cite John Hollinger's PER with regularity when trying to separate top performers from pseudo stars and dead weight. That's fine by me, but let's make sure everyone knows what PER tells us and what it doesn't tell us. Lucky for us, I wrote about the metric a while back. Here are the essential pieces from that discussion:

PER is largely an offensive metric meant to be the start of a discussion on player value, not the final arbiter on the subject...

...PER gets information exclusively from traditional box scores, but they make no record of context for shots. Box scores do not care when a player gets off a good shot at the end of the shot clock, or when a player mistakenly passes up a layup for a sub-optimal fade away jumper, or even when a player throws up a desperation half-court heave at the end of the half. Because box scores never record this information, PER simply cannot take the context of a shot into account.

As long as you understand that PER is a context-neutral metric that measures offensive output without doing much to deal with defense, you're off to a good start. Here's how Bucks players fare according to PER, through the eight games: 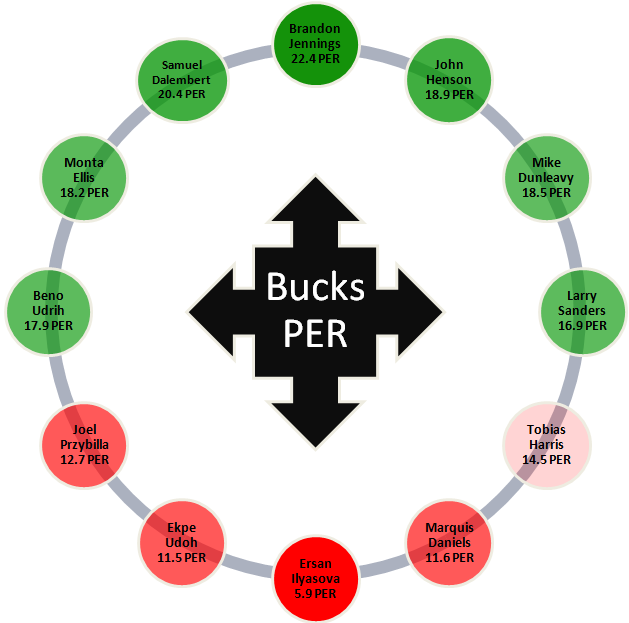 Ersan Ilyasova's 5.9 PER should make everyone sad. Brandon Jennings' 22.4 PER should make everyone happy. The marks for each player in between are open to debate. If you think Samuel Dalembert has been the second-best player on the team so far this year, I've got a bridge to sell you and some defensive numbers to show you. The same goes if you think Ekpe Udoh is the third-least productive player in the regular rotation.

If you want a simple alternative to PER (or a supplementary source of information), I've taken a look at the on-court / off-court numbers for every Bucks player and every lineup combination used this season and complied a working list of the best and worst combos.

By looking at five-man, four-man, three-man and two-man pairings, we can get an idea of how each group of players has impacted team offense and team defense. In essence, we get to bring game context back into the discussion -- which players helped the team build leads against the opposition? We get to ask about winning and losing basketball games. Isn't that nice?

What did I find? Mike Dunleavy has made the biggest positive impact impact on the floor for the Bucks, and he's a member of the best two-man group, three-man trio, four-man quartet and five-man lineup. Every best combination the Bucks have put on the court this season (so far) has involved Mike Dunleavy. That's called getting work done, people.

Here are the parameters I used for my Pryamid: 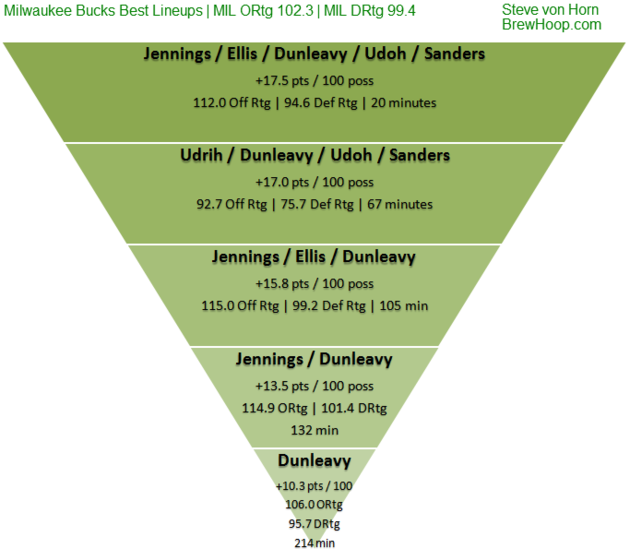 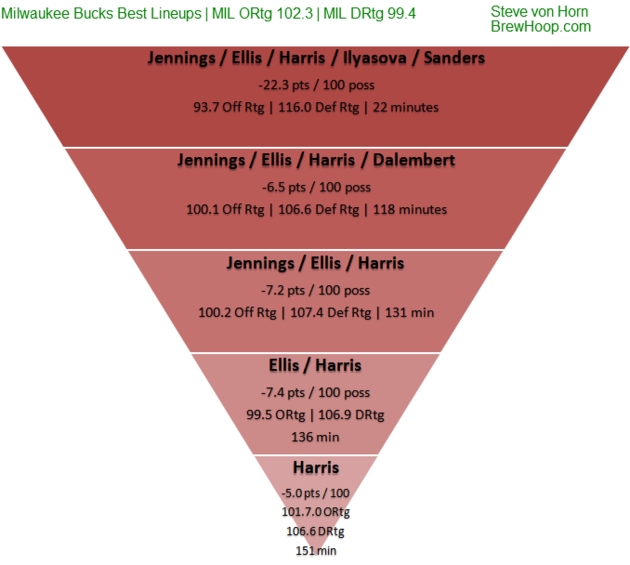