NBA power rankings: Knicks, Clippers and Thunder stand a cut above the rest

In this edition of NBA Power Rankings, the New York Knicks, Los Angeles Clippers and Oklahoma City Thunder are showered with praise. Tough schedules haven't slowed down the squads led by Carmelo Anthony, Chris Paul or Kevin Durant at all.

Share All sharing options for: NBA power rankings: Knicks, Clippers and Thunder stand a cut above the rest

Welcome to my NBA Power Rankings series. It will run by-weekly here on Brew Hoop, and maybe a few twists will be introduced along the way, but the general concept is to present as much information as I can about the rest of the league. If you don't have time to follow trends around the association, I've got the stuff you need to know. Dive in and pass along your own observations in the comments, we'd love to hear from you.

Tough Schedules Bring Out The Best In Grizzlies, Clippers, Heat, Knicks and Spurs. Here's a weird stat for you: the Grizzlies, Clippers, Heat, Knicks and Spurs have played the toughest schedules in the NBA to-date, and yet they all own some of the best records in the NBA. The Knicks and Heat own the best two records in the Eastern Conference, while the Grizzlies, Spurs and Clippers are all in the mix with the Thunder for the top spot in the Western Conference.

New York, Memphis and Los Angeles (LAC) all boast top-10 offenses and defenses -- based on a per-100 possession basis -- despite tough slates, and they've done things in very different ways. Carmelo Anthony and the Knicks play at the third-slowest pace in the association and they rely heavily on three-point shooting to dominate teams with their offense -- a league-leading 33% of their points come from three-point field goals. LeBron James and the Heat play a bit faster and have actually been below average on defense, but they also use triples to prop up their potent offense (No. 2 unit behind NYK).

The Clippers play the best defense of anyone in the bunch (No. 5 overall) thanks to strong starts from Eric Bledsoe and DeAndre Jordan, and the four-highest turnover rate in the league is the only thing holding back the offense from outright excellence at this point. Only two of the 11 fastest teams (measured by Pace) own top-10 defensive ratings, and those teams are the Clippers and Grizzlies. How do they do it? Opponents turn the ball over quite a bit trying to keep up with each of them.

The rich get richer, I suppose. It's hard to see any of these teams letting up when the schedule softens (barring a significant injury), so expect these five squads -- and the Thunder -- to be the ones battling for the top playoff seeds.

On the flip side, the struggling Pacers have played the weakest set of opponents in the NBA. Their No. 2 mark in Defensive Rating (96.6 pts allowed / 100 poss) looks impressive at first blush, but I'd expect that number to swell a bit when the competition stiffens in the coming weeks. The Celtics and 76ers have also played the fifth- and sixth-easiest schedules in the league, so lackluster starts for both teams could come back to bite them in the near future.

Bucks are easily the NBA's fastest team, and they are surprisingly the league's best defensive rebounding group. If you'd told me before the season that a team led by Brandon Jennings and Monta Ellis would play at the league's fastest pace (98.59 possessions per 48 minutes), I would not have been impressed by your predictive skills. However, if you had told me the Bucks, Cavaliers, Raptors, Warriors and Trail Blazers would round out the top-5 in defensive rebound rate, I might have phoned in for the authorities to come and get you -- but you would have been correct!

That's a strange group that sits atop the NBA, because I don't spot a single legitimate center in the bunch, but it's an encouraging sign that Milwaukee can roll out lineups with the Tube Men (Larry Sanders, Ekpe Udoh, John Henson) without fear of giving up too much on the glass.

After oscillating between terrible offenses and terrible defenses over the past decade, it's nice (?) to find the Bucks with roughly average outputs in both phases (No. 16 offense, No. 15 defense). If Skiles pinches off playing time for Ilyasova and Dalembert and favors the Tube Men, expect the defense to move closer to the top-10. If the head coach goes the other way, the hope would be that the offense would cover up any further defensive drops.

Other Bucks things I like: (1) the team scores 45.1% of its points in the paint, which is the seventh-highest percentage in the league and (2) Milwaukee scores 20.5% of its points off opponent turnovers, which means Jennings and Ellis are doing their best to avoid half-court offensive sets where they struggle to get good shots.

The one Bucks thing I like the least: the Bucks have hit on 31.5% of their threes, which is the No. 25 mark in the NBA. Back in the off-season I worried about the Bucks' lack of shooters and wrote that it's very rare for a poor three-point shooting team to score efficiently on offense. At the moment, the Brooklyn Nets are the only top-10 offense with a three-point percentage below 35%. Ah well.

*Statistical support for this article has been provided by NBA.com/Stats

*Special Note: I've created the spreadsheet in such a way that you can sort each category using the filters. Please explore and enjoy! [MOBILE USERS SEE BELOW]

For Mobile Users Who Can't See The Embedded Chart 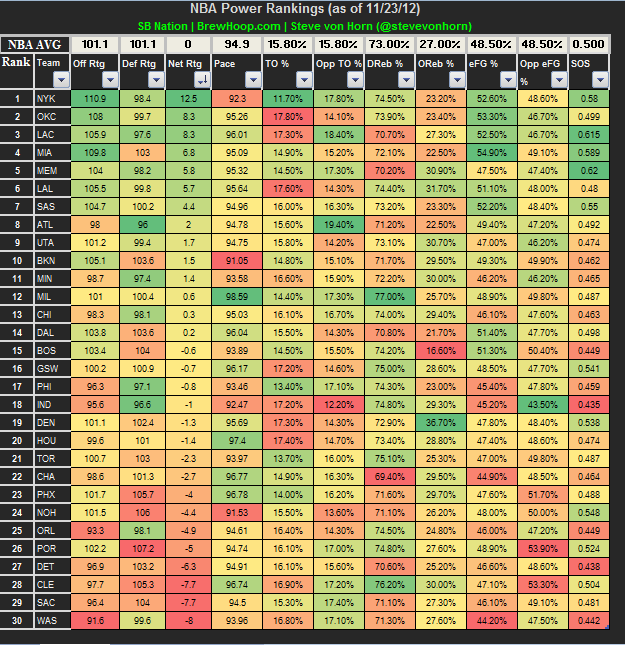