The third installment of a bi-weekly Milwaukee Bucks lineup analysis series that tracks the best and worst lineup combinations employed by Scott Skiles. Marquis Daniels takes the spotlight in this edition.

Let's talk corner threes. For the season, the 2012-13 Milwaukee Bucks have scored 22.9 percent of their total points from mid-range jumpers - mid-range being defined as the area inside the three-point line and outside the paint. Only two of the top-15 four-man lineup combinations for Milwaukee this year have meaningfully deviated from that trend by replacing mid-range production with three-point production (which is a terrific change to make). In a stunning upset, both of those quartets feature Marquis Daniels playing alongside Brandon Jennings and Monta Ellis.

When Larry Sanders joins Daniels, Ellis and Jennings, the mid-range allocation drops to 14.9% and the percentage of points derived from threes jumps to 22.3% (from a normal team average of 17.9%). When Ekpe Udoh steps in for Sanders beside that trio, mid-range allocation falls to 15.1% and three-point contributions rise to 20.9% of total points scored.

How are those two lineup combinations so successful at transforming sub-optimal mid-range shots into three-point attempts? They shoot 40.4% and 44.4 percent from beyond the arc, respectively. Is that sustainable? Probably not. Marquis Daniels has played through nine NBA season and he's never shot better than 30.6% from three in any single campaign. His career 3PT% sits at 23.5, which is a ghastly figure for any perimeter player. However, *Starquis* has converted on 9-of-24 of attempts this season (37.5%), and that potency has helped space the offense and fuel an important change in how the offense gets points.

Let's think back to the summer for a second. I spent the entire month of July (Vol. 1) articulating my argument (Vol. 2) that the Bucks desperately needed to sign a legitimate shooter who could hit threes from the corners (Vol. 3) in order to improve the geometry and spacing in the offense.

I liked Marco Belinelli as a reasonable option in free agency, but he wound up with the Bulls on a two-year, $3.8 million deal (side note: take a look a Belinelli's production since he moved into the starting lineup for Chicago). The Bucks landed Daniels in a move made later during the off-season.

Okay, that's water under the bridge at this point. Sure the Bucks have a below-average offense and they rank 28th in 3PT% and 21st in corner 3PT%. And yes, Belinelli is shooting 41.3% from three-point range on the year, but it's WATER UNDER THE BRIDGE I SAY.

Marquis Daniels has actually helped soften the blow...for now. Before I explain, here's a quick distillation of what I harped on over the summer:

The Bucks badly need a wing player to space the floor on offense and hit corner threes, because it's a real stretch to think Tobias Harris can step in and keep the defense honest. If Harris is forced into the starting lineup, he could struggle to produce [as a floor spacer in the corner]. Another wing shooter would allow Harris to slide into a hybrid offensive role in specialized second-unit combinations.

...Unless the Bucks add someone else to hit corner threes (like Delfino) or a true pick-and-pop option...things could become very difficult for Jennings and Ellis as driving lanes are cut off by sagging defenders in non-Dunleavy lineups.

Guess where Daniels has excelled from along the arc so far in 2012...that's right, the corners. He's 7-for-13 in the corners of the court, and only 2-for-11 above the break on triples. Maybe Marquis Daniels suddenly became a very solid corner three-point shooter. I have no idea why that would be true only in his 10th year, and it doesn't make enough sense to advance as a reasonable theory, but the truth is that he found his stroke for long enough to bridge the gap until Dunleavy returns. That doesn't mean the problems are solved for Milwaukee on offense, but it did help the team stack a few wins in the interim. It's a nice storyline for the moment being, but it would be an unbelievable storyline if it continued.

Here's a look at Daniels' impact on those particular units noted above:

Now here's your bi-weekly PER update:

*In just short of a month's time, Brandon Jennings' PER has fallen from 22.4 to 16.7. That's an alarming step down for a guard who should be raising his level of play heading into restricted free agency. It makes me feel a bit nervous about the trade chatter surrounding BJ, because I'm not fond of selling low on anybody. The name of the game is supposed to be buy low, sell high. I'd hate for the Bucks to take pennies on the dollar when they still have the right to match any offer he receives during the off-season -- which could turn into a blessing if someone lowballs him and he signs the offer sheet. There are some systemic issues that crop up with Jennings, and it's impossible for the franchise to go back from the 35+ MPG and starting point guard thing now, but Ellis still feels like the guy who should move when (yes, I said when) they break up this back court combo. That's at least how I feel at the moment.

*Doron Lamb's NBA career is going just how everyone expected: he has flashed some potential as a lock-down perimeter defender and he can't hit the broad side of a barn with his outside shots. Wait.....WHAT? Lamb suffered through an 0-for-18 stretch over the past week that made even the most hopeful fans cringe, so it's natural that his PER dropped even further into the disaster zone. He took so long to hit his first NBA three that I had joked my celebratory doves passed away long before he gave me a reason to release them, but we've shifted to a point where this issue can't be joked about any longer. Again, he's very young and his defensive prowess has been notable, but Lamb is clearly not ready for the NBA right now.

*Ersan Ilyasova spent the first part of the season digging an incredible hole -- he owned a 5.9 PER on Nov. 19 -- but since that time he's managed to climb up to a respectable perch. His marks are still below average, and he's hardly worth the $7.9 million the Bucks are paying him this season, but things are improving. He's effectively lowered the standard we hold him to, which is a tragedy in its own right. 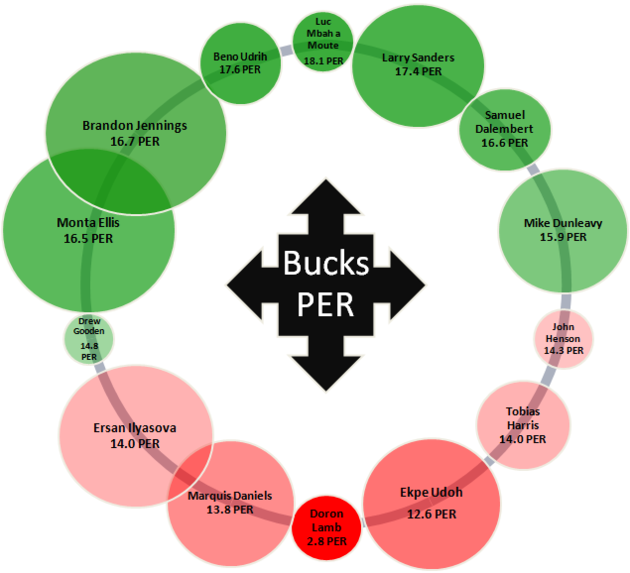 Take a look at the changes from Vol. 2 (click to enlarge)

Now let's get to the updated lineup pyramids (note the Daniels/Jennings/Ellis success and then refer to my content above if you skipped over those paragraphs).

In case this is your first time reading the series, I'm breaking down the best and worst trends among different lineup grouping for the Bucks. When I speak of a four-man lineup, it means those four players are always in the five-man group, and the final slot could be filled by anyone else on the roster (and so forth down the line to two-man groups). Here is what else you need to know:

*My best observation is posted at the outset of the article. Be sure to watch the video to drive the point home.

*Marquis Daniels, Ekpe Udoh and Larry Sanders are the only three men who have not ssen their defensive rating plummet when paired with Brandon Jennings and Monta Ellis. Those three are among the best defenders the Bucks can put on the floor. If Daniels can't keep up the offensive output, it will be interesting to see how effective this unit will be going forward. The good news is that they've been excellent so far this season over 40 minutes of action.

*If you haven't missed Beno Udrih, you haven't been watching Bucks games while he's been out with an ankle injury. 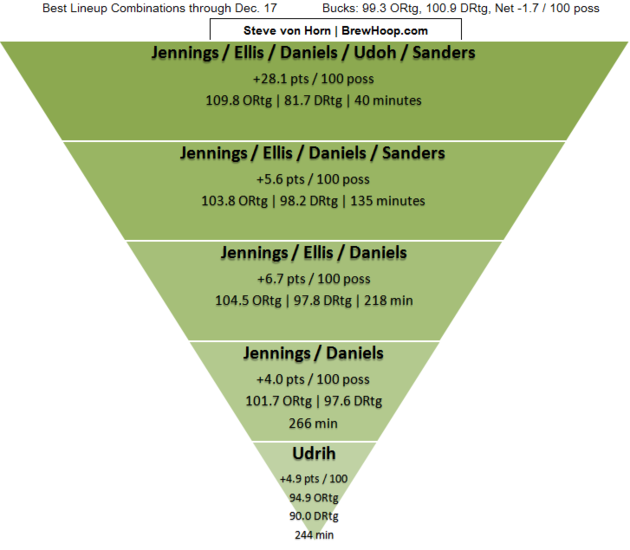 Here's a look at the trends that have developed over the first three installments in the series (click to enlarge).

*The more Tobias Harris has played, the worse he's made things. Take a close look at the image where I've combined all three volumes of the worst pyramids into a single graphic. Harris only played 23 minutes additional minutes since Vol. 2 on Dec. 2, but over that time he managed to drop even further from -7.7 pts / 100 poss to -9.6 pts / 100 poss. As it's been from the beginning, defense is the primary issue. All signs point to the fact that he's not going to be a small forward in the future. I still think he could flourish in hybrid reserve lineups as a face-up power forward. But for those wondering why he's on the bench, it's because he still has a lot to learn about the finer points of executing on defense.

*The Bucks have started to vary their five-man units more often in recent weeks, probably in part to injuries and in part due to ineffective play. The most-used quintet is still Jennings/Ellis/Harris/Ilyasova/Dalembert at 117 minutes played, but it's a group that's under water at -2.9 pts / 100 poss. Again, the defense isn't up-to-par with Jennings, Ellis, Harris and Dalembert all on the floor at the same time.

*I think we can all see the Jennings/Ellis pairing isn't working, but I might as well pass along the numbers in case any holdovers are out there. Over 651 minutes in 2012, that duo is at -3.2 pts / 100 poss. The only two-man groups that have been less successful for the Bucks (among the top-10 combos in minutes played) are Jennings/Sanders at -5.0 and Ellis/Udoh at -5.3. If you're scared and confused, you are not alone.

*John Henson is the only Bucks player with a larger negative defensive split than Jennings, and he has played less than 25% of the minutes Jennings has in 2012. 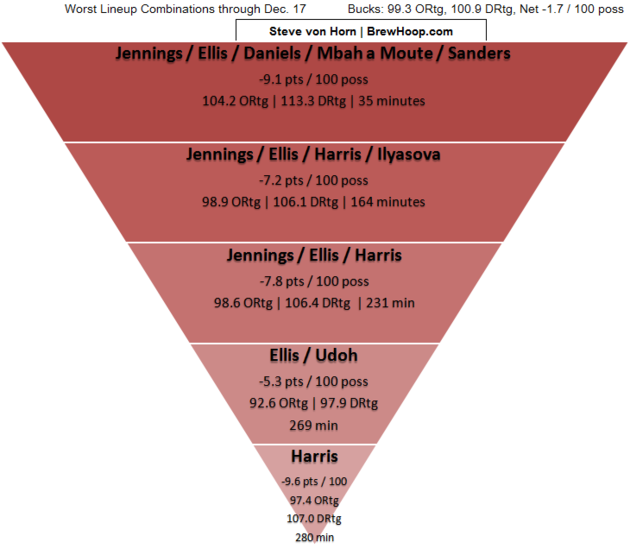 Again, click to enlarge an image that allows you to track the trends that have developed over the first three installments in the series.