Milwaukee Bucks rookie guard Doron Lamb has nearly cut his shooting percentage in half over the past few weeks. However, coach Scott Skiles believes he's still taking the right shots and doing everything you would expect from a first year player.

All offense, no defense gets first year players nowhere in Skiles' rotation (Tobias Harris). The same goes for no awareness (Larry Sanders). Raw talent is certainly worthy, but only if those skills become indispensible within the system (Brandon Jennings, John Henson not so much).

For the most part, a rookie has the best chance to get regular minutes under Skiles if they're ready and willing to play defense, while understanding their own limitations (Luc Mbah a Moute). Such has mostly been the case with Doron Lamb, whose inaugural NBA season has taken a tumultuous turn in December.

Despite missing all of his first NBA training camp with a torn ligament in his left elbow, Lamb has been thrust into a role of significance thanks to injuries to Beno Udrih and Mike Dunleavy, both of whom are the Bucks only bench options in the backcourt.

Before Tuesday night's game, Skiles discussed Lamb's hastened development, his potential, and the general hardships of a rookie trying to fit in amongst the best basketball players in the world.

Adjusting from a college schedule to the day-to-day workload of NBA life can be overwhelming mentally on rookies, to the point where many can get frustrated, lose their identity, and start jacking up bad shots. However, Skiles believes this isn't the case for Lamb.

"(Forcing shots) really isn't his style. They just weren't going in for him," he said. "I've been in that roll before where you're a bench player...you can check into a game and go 1-4. You know if you got two more you'd be 3-6. You just don't get them because you check out of the game. It's just the nature of it. That's not an easy role for a guy to learn how to play in." 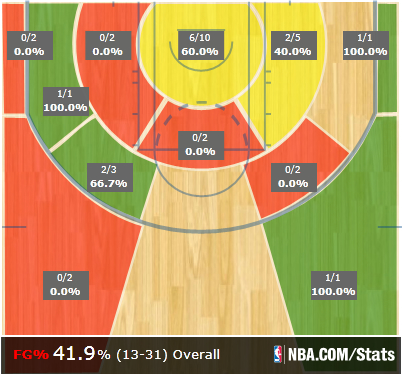 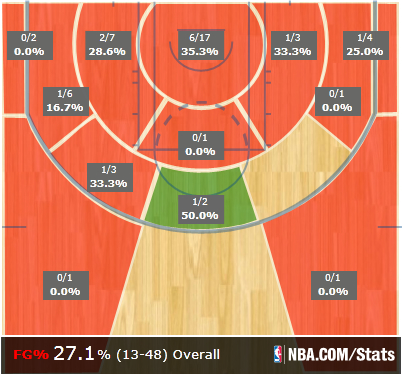 As you can see, Lamb's shooting percentage around the hoop plunged from 60% to 35.3%, despite increased shots from that area. Mid-range shots, something of a strength for Lamb coming out of Kentucky, have not proportionally taken up a larger allocation of his attempts, despite Lamb's difficulties on the left side of the court.

Usually when a player on Skiles' roster struggles through a shooting slump, but receives consistent playing time, he's either getting paid a lot or playing good enough defense to overlook the problems on offense. In Lamb's case, the Bucks' coach was very complimentary of his defensive abilities.

"He's got a good head about him out there. Like a lot of young players, they define themselves strictly on whether the ball goes in the basket or not," Skiles said. "I'm not saying he totally does that, because he's a pretty good all around player. He's a good pick and roll player, he's a good defender, he's going to be a really good defender at some point I think, but that is tough. You don't intend to come out against the great players in the NBA, get an opportunity to play and miss a ton of shots in a row."

It remains to be seen if Doron Lamb can develop into another second round trophy hanging next to Mbah a Moute and the long-since-departed Jodie Meeks on GM John Hammond's wall. However, if Lamb continues to roll through offensive punches with poise while contributing immediately as a solid perimeter defender, he'll be set up to hold an NBA roster spot for years to come.