It's time for our second in-depth look at the best and worst lineup combinations for the 2012-13 Milwaukee Bucks. Larry Sanders has been playing excellent basketball lately, but how are others in the bench mob (Beno Udrih, Ekpe Udoh, Mike Dunleavy) holding up?

The Milwaukee Bucks moved to 8-7 after their win over the Boston Celtics on Saturday, but the extreme ups and downs of the squad have made them a difficult bunch to understand. I'm back with another in-depth look at the best and worst lineup combinations the Bucks have used most frequently this year, and hopefully the exercise helps us all get a better handle on how to digest the situational successes and failures of the team.

The short version of my story about the 2012-13 Milwaukee Bucks hasn't changed: Tobias Harris isn't a good fit with Monta Ellis and Brandon Jennings and Samuel Dalembert's defensive reputation is more powerful than his actual presence in the paint. Beno Udrih, Mike Dunleavy, Ekpe Udoh, and Larry Sanders work well together and help the Bucks build leads and/or mount comebacks.

John Henson's recent ascension is a good sign for the Bucks, but the rookie hasn't actually arrived yet if we want to be technically correct. Despite his enticing measurables and his encouraging NCAA pedigree, Henson hasn't shown the ability to execute the nuances of NBA defense yet. He's contributing on offense (18.0 PER) and grabbing rebounds whenever they enter his general vicinity, but his help defense and rotational awareness haven't been up-to-par.

I expect better from him on defense in the near future, but here's the reality at the moment: over the 134 minutes John Henson has played, the Bucks have been outscored by opponents by 13.9 pts / 100 possessions. The only player with a worse on/off differential is Joel Przybilla (-26.1 pts / 100 poss). Why is the split so pronounced? Defense. The Bucks have surrendered 110.8 pts/ 100 poss when their first-round pick is on the floor. For reference, they allow 100.7 pts / 100 poss overall, and the worst defensive team in the NBA, the New Orleans Hornets, allow 107.5 pts / 100 poss.

Again, the only player who causes Milwaukee's defense to drop even further is good old Joel Przybilla (124.4 pts allowed / 100 poss). Samuel Dalembert has the next-most negative impact on the defense after Henson (108.3 pts / 100 poss).

Units that include Henson won't be that bad on defense all season. The rookie has too much natural talent to be consistently lumped in bad units, but it's clear that Skiles will have to customize lineups to make sure Henson isn't paired with Dalembert too often and to get Henson working alongside either Ekpe Udoh or Larry Sanders in most situations. Tube Men gotta stick together, right?

With all this in mind, let's take a look at the Player Effiiency Rating (PER) and playing time visualizations for each player. 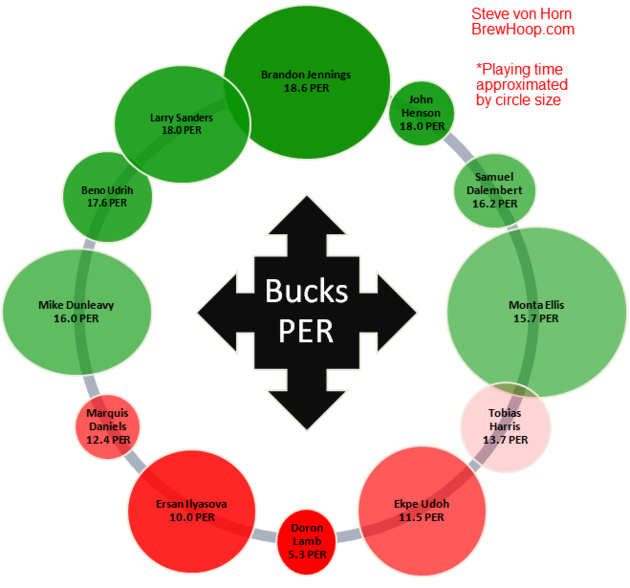 -- Ersan Ilyasova has worked his way up to a double-digit PER! Mission accomplished!

-- Doron Lamb's PER is wrong. At least that's how I feel. He hasn't been amazing or anything (my doves died, after all), but he's been much better than what his PER would suggest.

Here's my disclaimer for the lineup pyramids: 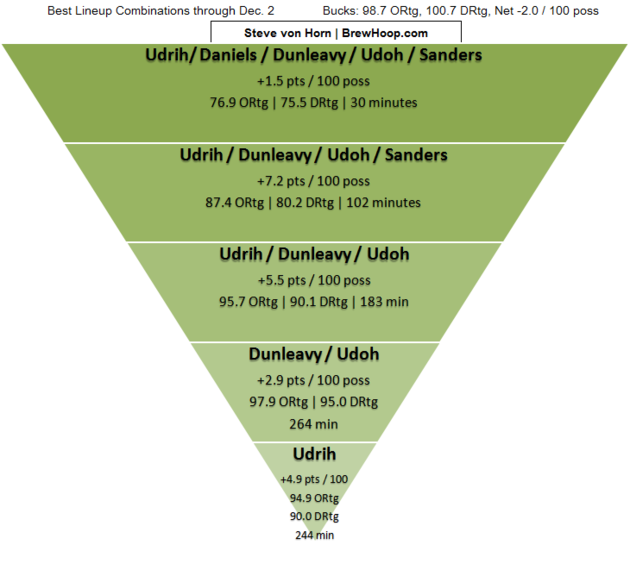 -- Beno Udrih injured his right ankle during the fourth quarter of the game against the Timberwolves, and he will reportedly miss 1-2 weeks. It's going to be interesting to see how the Bucks survive without one of their most effective players. Doron Lamb has looked good to me, but Skiles has had the freedom to pick-and-choose easy spots for Lamb to succeed against backups in low-pressure situations. With Beno out, the rookie guard will need to step up against better talent to fill the void during Beno's absence. Marquis Daniels is one of the team's better defenders, and he can help soften the blow, but you don't want him handling the ball in pick-and-roll. Half court offense could be an adventure (note: Boston jumped out to a 17-0 start in the first game Beno missed).

-- All of these units are below-average on offense, but they are elite defensive groupings. The Bucks' true identity lies on defense. Don't forget that, no matter what the national media tells you.

-- Click Image Below To Enlarge Comparison From Vol. 1 to Vol. 2 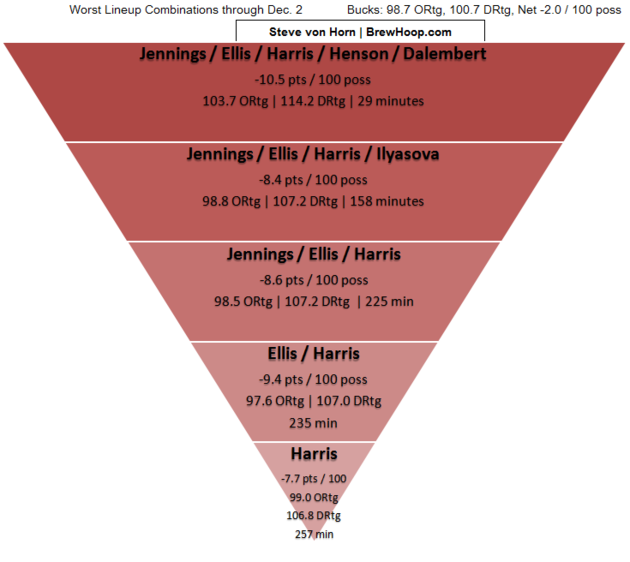 -- Tobias Harris isn't a good fit to play alongside Brandon Jennings and Monta Ellis. They need to try him in different lineup combinations, and LRMAM's return gives them the perfect cover to make the move without formally benching the young forward. I've been saying Harris won't work with the starters since July -- just look at how many times Harris appears in the two combined pyramids posted below -- and my most recent rant captures a lot of what I tend to say on the issue:

If Luc is healthy, he may eventually work his way into the starting lineup again. His defensive prowess makes him a more natural fit alongside Brandon Jennings and Monta Ellis than current starterTobias Harris, and the move might actually benefit Harris as well. [Note: Check out my entire series on LRMAM's defensive impact before groaning]

Over the past five games, Tobias Harris has shot just 38.9 percent from the field (14-for-36) and 14.3 percent from three-point range (1-for-7) while earning a total of six free throws and 17 rebounds. His defensive performance has been spotty-at-best, especially against quicker perimeter players, but his best traits would likely be accentuated alongside savvy offensive veterans like Beno Udrih and Mike Dunleavy, while his weaknesses would be masked when paired with shot blockers like Larry Sanders and Ekpe Udoh. It's a bit counter-intuitive to think another positional logjam would help the Bucks, but in this case I think the unique skill set LRMAM provides makes this a good problem for the 2012-13 Milwaukee Bucks.

-- Click Image Below To Enlarge Comparison From Vol. 1 to Vol. 2