Bucks vs. Heat recap: The one where everyone was great

In perhaps their most complete performance of the season, the Milwaukee Bucks beat the Miami Heat on both ends of the floor by turning up the pressure and putting together a bevy of scoring runs.

Share All sharing options for: Bucks vs. Heat recap: The one where everyone was great

Last night's 104-85 Milwaukee Bucks win over the Miami Heat summed up in one word: Salacious.

The best Bucks victories over the past couple years have shared common traits: socialist ball movement, viper-quick transitions, and an active, stout interior defense that would make Bell's proud. Suffice to say, Saturday felt like one of *those* nights the second Monta Ellis lost his dribble, recovered, spun, and swished in a first quarter buzzer beating jumper.

Milwaukee registered assists on 29 of 40 buckets, turned the ball over a season low 5 times, and scored 21 points in on the break. Brandon Jennings and Ellis made passing lane disruption look like performance art (9 combined steals), and the supporting cast had the clairvoyance to know when to shoot, and where to position themselves for a timely rebound.

It was the perfect storm of near flawless execution end-to-end, and reflective of everything we knew about the Bucks' ceiling when everything falls into place. More, please.

"There’s no secret by now, when we’re up and down the floor and creating the pace we like to play at, most times we look like a pretty good club," coach Scott Skiles said. "When we’re kind of deliberate, the shot clock starts winding down, we’re just not near as good."

Luc Richard Mbah a Moute. In addition to a collection of signature off-ball cuts and up-and-under lay-ins on offense, Mbah a Moute was Gorilla glued to LeBron James for most of the night, to stellar results. James shot above 50% for the game, but it was the shots LeBron didn't take that made Luc's performance artistically beautiful. On numerous occasions, Mbah a Moute was left one-on-one against a LeBron post-up, and more often than not, it resulted in LeBron kicking the ball back to the perimeter or forcing a pass inside.

"I thought we did a good job on LeBron," Skiles said. "The guy's that good. Luc, in particular, in one-on-one situations didn't give any ground, contested his shots."

Brandon Jennings. The most impressive line in Jennings' final box score was his 7-7 on free throws. Jennings also finished 3-3 at the rim, and had a swag scowl for the ages after Mario Chalmers drew a flagrant for hooking Jennings' neck on a breakaway. He led the team with 25 points that felt very unselfish, like Jennings was picking his shots based off what his teammates, and the defense, were allowing. Funny how that happens, sometimes.

Larry Sanders. Sanders deserves the co-MVP for this one, along with Mbah a Moute, primarily for his now-standard defense of the rim that left James, Dwyane Wade, and Chris Bosh in a constant state of grimacing. Sanders was also a crucial offensive weapon down the stretch, scoring 8 of his 16 points in the last 15 minutes on 4-5 shots (mostly crowd-pleasing dunks) in the restricted area. It's also noteworthy that this resurgence came after an early third quarter benching due to a lethargic effort that drew a steady stream of profanities from Skiles.

"Larry's such a key for us in our ability to transition from one end to the other because of his speed," Skiles said. "When he's really changing ends, it puts a lot of pressure on the defense."

42-16. Drawing fouls (7-7 ft), swarming on defense (17 points off 7 Heat turnovers), and getting open looks along the perimeter (5-8 3fg), this was easily one of the best 15 minute close out jobs I've ever seen from the Bucks. Rather than break it down more than I already have, I'll present both teams' shot charts for that time span, no further comment required: 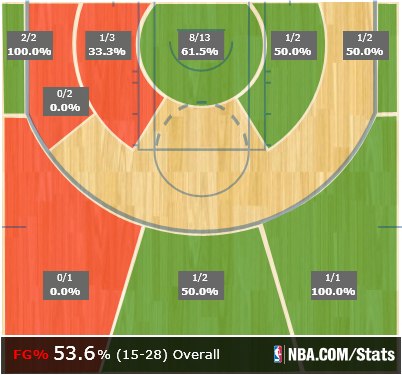 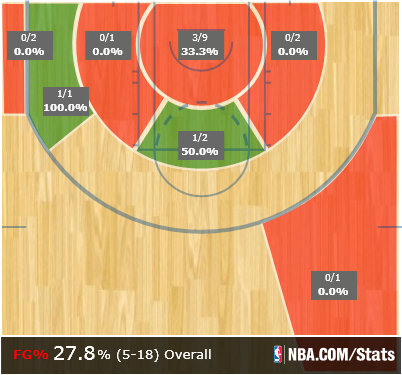 25. Including 7 in that final Run of the Valkyries, the Bucks' high pressure defense frustrated the oft-listless Heat into a season-high 21 turnovers that were converted into 25 points. That's a conversion rate of 60%. My work clients would be incredibly proud of that metric.

29. When the Bucks share the ball, they create space and keep the defense cognizant of everyone on the floor. This isn't a revelation about the team's identity, but it bears repeating in the wake of such a resounding win.

"Early in the season, when we were playing well offensively, it's because we had 28 assist games, low turnover games," Skiles said. "It's not that we don't have players that can't go create a shot for themselves, but were just much better when the ball is moving around. Because we have so many players that can play that way, they can put the ball on the floor, kick it to other people, things like that."

The crowd. Normally, games against elite NBA teams produce a lot of these and these. But from the start, this one felt like a real Bucks game, as the crowds' energy ebbed and flowed based on Milwaukee's on-court performance. It was sellout #1 for the Bucks, and by the time the garbage crew came around with 3 minutes left, reminiscent of the BMO Harris Bradley Center circa 2009-10.

Not too high, not too low. Beating the Miami Heat in the regular season is certainly an accomplishment, especially when they boast a 4-0 record on the second night of back-to-backs and 7-0 record on Saturdays. However excited fans get about wins such as these, players can't get too giddy over a single win, lest they forget the tasks ahead. Here's what Sanders said about last night's victory, in the bigger picture:

"It's great in the confidence area, but we know we have Detroit tomorrow night," Sanders said. "If we can keep it going, then that's where it counts."

Everyone but Marquis Daniels. Pulling up in traffic and finishing 1-9 is no way to go through life, son.

My car got towed. Word of advice: Don't park in a spot around the Bradley Center that has a meter covered in a grey hood. They will tow your car.